Demonization of Russia in a New Cold War Era

Inventing a foe to sell military ambitions: still the most dangerous of games.

As we watch the media today, we are spoon fed more and more propaganda and fear of the unknown, that we should be afraid of the unknown and have full faith that our government is keeping us safe from the unknown. But by looking at media today, those of us who are old enough will be reminded of the era of Cold War news articles, hysteria of how the Russians would invade and how we should duck and cover under tables in our kitchens for the ensuing nuclear war.

Under this mass hysteria, all Western governments were convinced that we should join Western allies to fight the unknown evil that lies to the east. Later through my travels in Russia during the height of the Cold War with a peace delegation, we were shocked by the poverty of the country and questioned how we ever were led to believe that Russia was a force to be afraid of. We talked to the Russian students who were dismayed by their absolute poverty and showed anger against NATO for leading their country into an arms race that they could not win. Many years later, when speaking to young Americans in the US, I was in disbelief about the fear the students had of Russia and their talk of invasion. This is a good example of how the unknown can cause a deep routed paranoia when manipulated by the right powers. 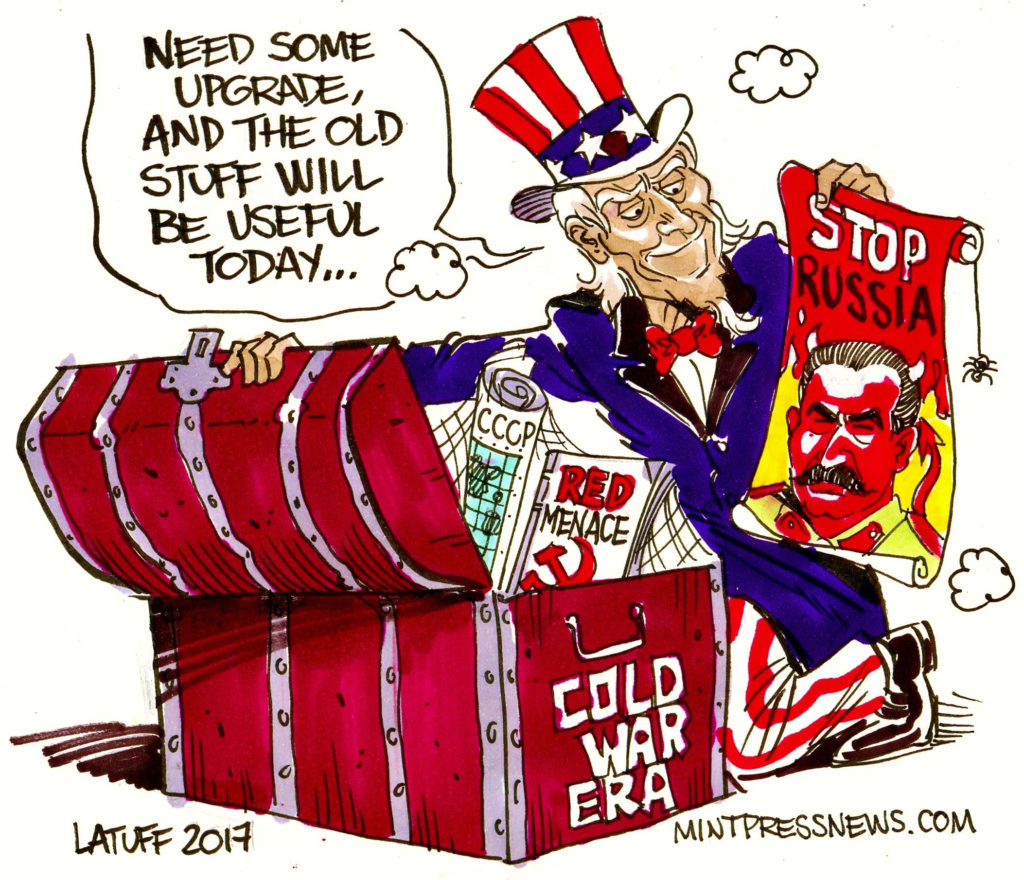 All military is expensive, and we can see in Europe that the countries are reluctant to expand their military spending and find it hard to justify this to their people. In looking at this scenario, we can ask ourselves what is beneficial about this hysteria and fear caused on both sides. All armies must have an enemy to deem them necessary. An enemy must be created, and the people must be convinced that there is need for action to safeguard the freedom of their country.  Right now, we can see a shifting of financial power from old Western powers to the rise of the Middle East and Asia. Do we honestly believe that the Western allies are going to give up their power? My suggestion is: not easily. The old dying empires will fight tooth and nail to protect their financial interests such as the petrol dollar and the many benefits that come through their power over poverty-stricken countries.

Firstly, I must say, that I personally believe that Russia is not by any means without faults. But the amount of anti-Russian propaganda in our media today is a throwback to the Cold War era. We must ask the question: Is this leading to more arms, a bigger NATO? Possibly, to challenge large powers in the Middle East and Asia, as we see the US approaching the South China seas and NATO Naval games taking place in the Black Sea. Missile compounds are being erected in Romania, Poland and other ex-Soviet countries, while military games are set up in Scandinavia close to the Russian border to practice for a cold climate war scenario. At the same time, we see the US President arriving in Europe asking for increased military spending. At the same time the USA has increased its budget by 300 billion in one year.

The demonization of Russia is, I believe, one of the most dangerous things that are happening in our world today. The scapegoating of Russia is an inexcusable game that the West is indulging in. It is time for political leaders and each individual to move us back from the brink of catastrophe to begin to build relationships with our Russian brothers and sisters. Too long has the elite cynically gained from war while millions are moved into poverty and desperation. The people of the world have been subjected to war propaganda based on lies and misinformation and we have seen the results of invasions and occupations by NATO disguised as “humanitarian intervention” and “right to protect”. NATO has destroyed the lives of millions of people and purposely devastated their lands, causing the exodus of millions of refugees. The people around the world must not be misled yet again. I personally believe that the US, the UK and France are the most military minded countries, whose inability to use their imagination and creativity to solve conflict through dialogue and negotiation is astonishing to many people and me. In a highly militarized, dangerous world, it is important we start to humanize each other, find ways of cooperation, and build fraternity amongst the nations. The policies of demonization of political leaders as a means of preparing the way for invasions and wars must be stopped immediately and serious effort put in to the building of relationships across the world. The isolation and marginalization of countries will only lead to extremism, fundamentalism and violence.

During our visit to Moscow, we had the pleasure of attending a celebration of mass at the main Orthodox Cathedral. I was very inspired by the deep spirituality and faith of the people as they sang the entire three-hour mass. I was moved by the culture of the Russian people and I could feel that their tremendous history of suffering and persecution gave them sensitivity and passion for peace.

Surely it is time that we in Europe refuse to be put in a position where we are forced to choose between our Russian and American brothers and sisters. The enormous problems that we are faced with such as, due to climate change and wars, mass migration and movement of peoples around the world, need to be tackled as a world community. The lifting of sanctions against Russia and the setting up of programs of cooperation will help build friendships amongst the nations.

I call on all people to encourage their political leaders in the US, EU and Russia to show vision and political leadership and use their skills to build trust and work for peace and nonviolence.

Anticopyright: Editorials and articles originated on TMS may be freely reprinted, disseminated, translated and used as background material, provided an acknowledgement and link to the source, TMS: Demonization of Russia in a New Cold War Era, is included. Thank you.