3 Sep 2018 – Two reporters for the Reuters news agency were each sentenced to seven years in prison by a Myanmar court on today for possession of state secrets, a disquieting end to a trial that has lasted more than eight months and brought international censure upon the government of Nobel laureate Aung San Suu Kyi.

The arrest of Wa Lone, 32, and Kyaw Soe Oo, 28, has been widely viewed as retribution for their reporting on the massacre of 10 Rohingya Muslim men found in a mass grave in western Myanmar’s Rakhine state, and their conviction deals a serious blow to press freedom in the country. 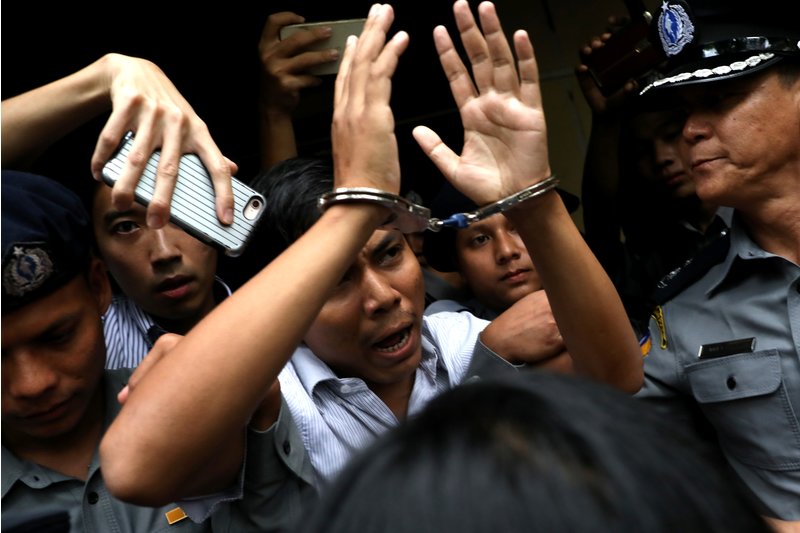 Journalist Kyaw Soe Oo is escorted from court after his verdict in Yangon, Myanmar on Sept. 3, 2018. Ann Wang—Reuters J

The pair have been detained since their arrest on Dec. 12, 2017, when they were accused of obtaining classified documents and charged under a draconian, if seldom-applied, colonial-era Official Secrets Act. Facing a maximum penalty of up to 14 years, each was sentenced to seven years with hard labor, minus time served.

“This is a dark moment and a deeply disappointing result,” Asia Editor for Reuters Kevin Krolicki said outside the courthouse in Myanmar’s commercial capital Yangon, as stunned supporters gathered by the entrance yelled and wept at the news. “What happened today threatens to undermine the freedom of press that democracy requires.”

“When we came here this morning we were hoping they would be released because they didn’t do anything wrong,” he said. “They just did their jobs. It made me so disappointed, this decision by the judge… but we are going to fight [this verdict].”

The trial has taken an enormous toll on Wa Lone and Kyaw Soe Oo’s young families. Kyaw Soe Oo’s wife, Chit Su Win, moved to Yangon with their 3-year-old daughter to attend the hearings, while Wa Lone has yet to see his daughter, who was born just three weeks ago.

“Everything I had hoped for this morning is gone,” Chit Su Win said after the verdict was read. 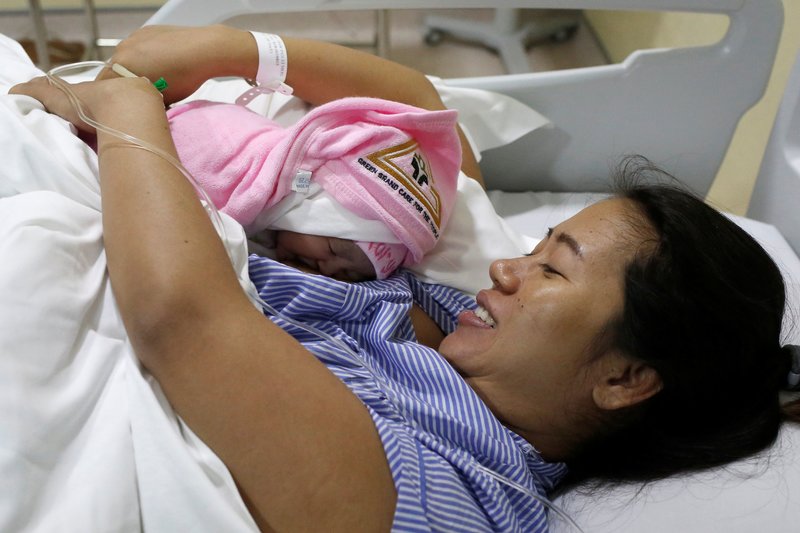 During the hour-long verdict, judge Ye Lwin maintained the journalists had “not acted as ordinary reporters,” but instead had intended to “damage the security of the country.”

Wa Lone and Kyaw Soe Oo have insisted from the outset that they were caught up in a bizarre plot that involved police inviting them to dinner and handing them the very documents that served as the pretext for their arrest. The contradictions only multiplied as the trial was hit with conflicting testimony, a prosecuting witness who forgot key details and a police captain who told the court he had been ordered to entrap the journalists. The captain was later sentenced to a year in prison, and his family evicted from police living quarters.

“From the start, this case has been a set-up meant to suppress their reporting,” says Shawn Crispin, senior Southeast Asia representative at the Committee to Protect Journalists. “It’s been very embarrassing for Myanmar to have this case expose how politicized and incompetent the courts are, especially as Suu Kyi argues for rule of law and independent courts as the bedrock of the new democracy,” he added. The case has been pilloried by dignitaries like Pope Francis and former President Bill Clinton. In March, prominent human rights lawyer Amal Clooney joined the defense team.

Read more: Myanmar’s Case Against Two Reuters Reporters Is a War on the Truth

Since its beginning, Reuters has been at the forefront of reporting on the crisis that has sent more than 700,000 Rohingya refugees fleeing across the border into Bangladesh. The Myanmar military, known locally as the Tatmadaw, launched a brutal crackdown following a an alleged attack on state security forces by Rohingya insurgents on Aug. 25, 2017. 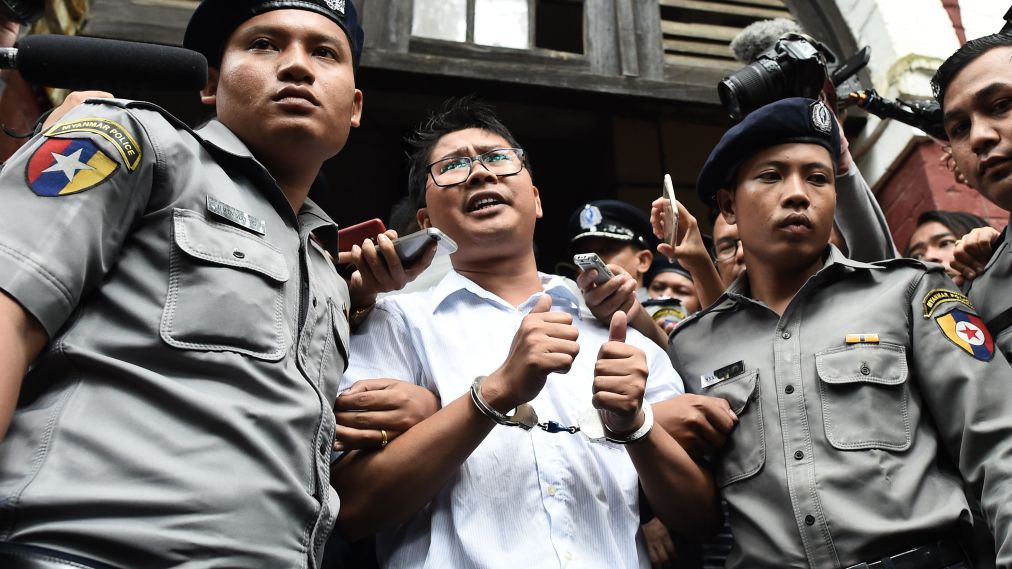 Myanmar journalist Wa Lone (C) is escorted by police after being sentenced by a court to jail in Yangon on September 3, 2018. – Two Reuters journalists were jailed on September 3 for seven years for breaching Myanmar’s official secrets act during their reporting of the Rohingya crisis, a judge said, a case that has drawn outrage as an attack on media freedom.
(Photo by Ye Aung THU / AFP) (Photo credit should read YE AUNG THU/AFP/Getty Images)

U.N. investigators, barred by the Myanmar government, last week recommended that six senior military officials face criminal charges including genocide for their role in the violence, which refugees and aid workers have described as a campaign of arson, rape and murder. Myanmar’s military and civilian government have categorically denied accusations of atrocities against the Rohingya, a persecuted and mostly stateless minority.

When Wa Lone and Kyaw Soe Oo were apprehended, they were investigating a massacre at Inn Dinn village in Rakhine state, where they had uncovered evidence linking state security forces to the killings. Their report, published more than a month after their arrest, included photographic evidence that appeared to show Security Police Battalion 8 present at an execution.

Read more: They’ve Spent Months in Jail for Doing Their Jobs. But These Two Reuters Reporters Are Not Losing Hope

Suu Kyi has insisted the reporters were not “arrested for covering the Rakhine issue,” as she calls it. In a recent interview with NHK, she said “all of this is in accordance with due process.” By not speaking out on behalf of the imprisoned journalists, human rights activists and foreign observers say Suu Kyi has once again belied her commitment to democratic principles.

For Myanmar journalists and activists, the case epitomizes the holographic freedoms portended by the end of the long-running military regime, a promised future which Suu Kyi embodied as a onetime democracy icon, yet failed to deliver as a leader. A former editor of Wa Lone, who asked not to be named, said the case “reflects a failure of uncivilized and unopened society which claims [to be a] democratic and open society.”

Both Kyaw Soe Oo and Wa Lone grew up during a historical flashpoint. Born around the time of the ‘88 generation uprising, a bloodily repressed pro-democracy movement, they watched as a military dictatorship open up to the world. By the beginning of this decade, Myanmar was a nation brimming with democratic promise in a region steeped in strongmen.

Restrictions on the media loosened as Myanmar moved away from decades of military rule toward a more democratic model. Pre-publication censorship ended in 2012 and the news-making business took off in gasps and starts. Many newsrooms expected Suu Kyi’s party to usher in a golden era. Instead, press watchdogs sounded alarms.

Wa Lone’s wife, lawyers and former editors describe him as “obsessed” with his job. As a reporter at The Myanmar Times before joining Reuters, he frequently slipped into restricted zones to cover military conflicts or the opium trade. He kept a bullet casing on his desk as a reminder of the fractured country’s many frontlines.

The son of a rice farmer who describes his agrarian ambitions as being truncated early by a childhood brush with a deadly snake, Wa Lone aspired to be TV presenter and so taught himself to use a camera. Irked by poverty and injustice, he devoted his free time to a children’s literacy charity and writing picture books about inter-racial tolerance.

Kyaw Soe Oo grew up in Rakhine State, the epicenter of the Rohingya crisis. A poet by calling, he turned to journalism as sectarian violence erupted around him. He is one of few “Rakhine Buddhists willing to investigate the atrocities committed by his own ethnic group,” says Reuters bureau chief Antoni Slodkowski.

Criticism of Suu Kyi’s government has at times been deflected as “fake news,” and the country has sunk on press freedom indices. The combination of nearly unbridled popular support for Suu Kyi and widespread enmity for the Rohingya has left little room for critical reporting on the crisis. Those who do are often seen as undermining the shared national democratic project by exposing Myanmar to international censure. As one the more polite Facebook users said of Kyaw Soe Oo and Wa Lone, “They betrayed their own race and religion.”

“There’s no evidence of any kind that the Reuters reporters intended to harm Myanmar or aid its enemies,” Reuters said in an emailed statement, adding that they “are two honest reporters who did not commit a crime.”

Wa Lone and Kyaw Soe Oo’s quest for truth in Rakhine pitted them against many of their countrymen, and earned them a torrent of death threats. But it also prompted a rare admission of wrongdoing from the military. Seven soldiers were given 10 year sentences for participating in the Inn Din massacre, though the military claimed action was taken after a tip-off independent from the Reuters investigation.

By convicting Wa Lone and Kyaw Soe Oo instead of commending their work, Myanmar authorities dealt a crippling blow to the country’s embryonic free press, and handed the military a virtual carte blanche. Few hazard reporting on military misdeeds when they know they could be next in jail. But following the decision, Wa Lone was defiant.

“I have no fear,” he yelled out, his hands still in shackles. “No one can make me fearful because I never did anything wrong.”