Promoting Unity and Harmony in Diversity

The world is full of diversities of various types — religious, linguistic, economic, political, geographic, anthropological. There are several religions that people have faith in, hundreds of languages that are spoken, existence of rich and poor countries and people, different types of political systems ranging from democracies to dictatorships, etc. Then people of different racial groups — from white to brown to coloured peoples live in geographical areas — temperate, freezing cold and unbearably hot regions, not to speak of nations that consist of dozens of islands or regions that are land locked.

With all this diversity, people and nations have learnt to live in relative peace and harmony despite the violence and terrorism that we are witness to in many parts of the world. The hostility and resultant violence seen is largely due to a feeling of otherness — in other words the feeling that we are superior to the others — religiously, linguistically, economically, racially.

In spite of these diversities, the world has produced some outstanding individuals who have talked of and lived in peace and harmony. Some of these noble souls are Buddha, Confucius, Jesus Christ, Mohammad, Swami Vivekananda, Mahatma Gandhi, Nelson Mandela, Bishop Tutu, Martin Luther King, and countless others. These great personalities have promoted a feeling of unity, equality and brotherhood among people.

Among the countries of the world, perhaps the most diverse one is India which has the different types of diversities indicated above. Prominent religions — Hinduism, Buddhism, Christianity,

Islam, and smaller ones such as Sikhism, Jainism, Judaism, Baha’i, Parsee faiths coexist relatively harmoniously. India is a land of countless languages, racial groupings, urban dwellers, agriculturists, factory workers, and indigenous peoples called Adivasis practising their own rituals, cultures and ways of life. India also has a vast coastline, the world’s rainiest and hottest places and the world’s highest mountain — Mount Everest in the Himalayas.

Contrast the coexistence of different religions in India with a recent report that has come from China. It has been reported that there is a crackdown on Christian congregations, destruction of crosses, burning Bibles and closing Churches and asking Christians to renounce their faith.

Similarly, in several Muslim countries, it is difficult if not impossible to build a temple or a church with severe punishments for those who flout the order.

One cannot forget the destruction of the beautiful Buddha statue in the Bamiyan valley of Afghanistan in 2001. The tall statue had been constructed by hewing the sandstone cliffs of the valley in the sixth century AD. It had become a landmark statue of the peace loving Buddha who preached love, harmony and nonviolence. Many attempts had earlier been made by Muslim rulers to destroy the Buddha statue but somehow it survived. However, the destruction of the vintage statue was done by the Taliban dynamiting it in 2001. 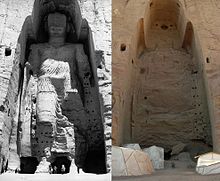 Buddha of Bamiyan before and after destruction.

It is not unusual for Indians of different faiths and speaking different languages to come together for an event — at a marriage ceremony or at the death of a person.

This recently happened when an elderly man suffering from liver failure died. He was a Sikh who spoke Hindi and Punjabi; his wife who was a Christian and whose mother language was Tamil had suffered from breast cancer and had died a few weeks earlier. The couple’s two sons did not have long hair and a beard as Sikhs do, were essentially cosmopolitan and spoke Hindi and English at home with their wives and children.

After the elderly Sikh passed away and was cremated, a family ritual was being held in the company of his family —sister, other relations and friends. Readings in Punjabi from the Sikh Sukhani Saheb in praise of Guru Nanak and other Gurus were part of the ritual. Then followed reading in English from the Bible by the wife’s sister after which bhajans (spiritual songs) in praise of Lord Krishna and other Hindu Gods were sung by the deceased sons, their wives and grand children.

The ritual was a harmonious blending of three great religious faiths and in three different languages. And then the sister of the man’s deceased wife spoke a few words thanking the Lord Christ in Tamil. A fantastic spiritual thanksgiving. This blend of religions and languages can perhaps take place only in India with its varied diversities and a feeling of harmony and cultural togetherness. Wonderful!

One wishes the world also lived and practiced these virtues of peace, harmony and spiritual unity.

Anticopyright: Editorials and articles originated on TMS may be freely reprinted, disseminated, translated and used as background material, provided an acknowledgement and link to the source, TMS: Promoting Unity and Harmony in Diversity, is included. Thank you.