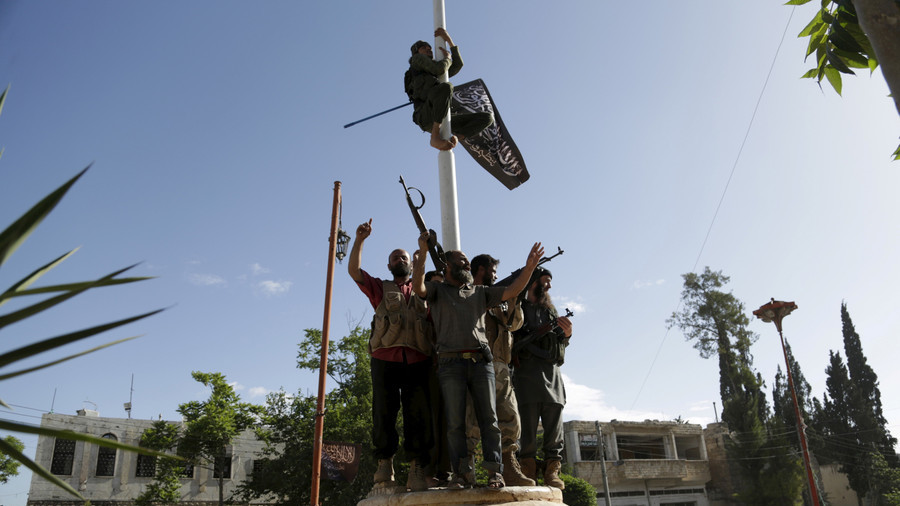 A member of al Qaeda’s Nusra Front climbs on a pole to hang the Nusra flag after a coalition of insurgent groups seized the area in Idlib province, May 29, 2015. © Khalil Ashawi / Reuters

8 Oct 2018 – Nikki Haley, the hypocritical US Ambassador to the UN, mistakenly thinks she can dictate – from New York City, far from the terrorists which her country supports – that the Syrian army cannot fight and eradicate al-Qaeda in Idlib.

Her, and other American figures’ words, come with faked concern over the lives of Syrian civilians.

This is particularly ironic given that the US-led coalition, illegally in Syria, destroyed the Syrian city of Raqqa and killed untold numbers of civilians along the way, in their fake fight against Islamic State (IS, formerly ISIS/ISIL) – a pretext which has only time and again strengthened IS in Syria. Raqqa remains uninhabitable, and even today corpses are still being unearthed.

Haley and the Western corporate media have been bleating in chorus about Idlib and the civilians there, deliberately ignoring the presence of Al-Qaeda and affiliated terrorists occupying the governorate and surrounding areas in Aleppo and Hama governorates.

They ignore, too, the reality of life in areas which were once occupied by these terrorists: the torture, imprisonment, maiming, assassination, and starvation endured by the civilian population at the hands of these extremists and paid mercenaries.

The other reality Haley and co-regime change mouthpieces whitewash is that once these areas are liberated of Al-Qaeda, Ahrar al-Sham, Jaysh al-Islam, and the myriad other extremist terrorist groups, life gets back to normal, schools reopen, cities and towns repopulate, ancient traditions resume as they have for thousands of years in this cradle of civilization.

With the exception of Deir ez-Zor, and smaller hamlets throughout the Syrian countryside, I’ve been to every major city and town liberated by Syria and allies from Al-Qaeda and co-terrorists. They are all now in peace, with many of the areas thriving, rebuilding, and the other areas at least in peace without the sadistic rule of terrorists.

In June 2014, I went to the old city of Homs just one month after the reconciliation deals that saw Al-Qaeda and Free Syrian Army terrorists bused out of the city. This beautiful historic old city and its ancient churches were in shambles. Some of that was due to the Syrian army fighting the terrorists, but most of it was due to the terrorists burning, looting, and booby trapping the buildings they had occupied.

Indeed, a resident of the old city, Abu Nabeel, took me around, showing me the destruction, vandalization, burning and looting that terrorists did before leaving Old Homs, including leaving bombs in residents’ homes, to inflict yet more loss of life even after the terrorists had left. But also while there in June 2014, I saw residents and youth volunteers scraping the debris, painting hopeful art on walls, beginning the rebuilding process.

In December 2015, I returned to Old Homs to find that some reconstruction had occurred. Churches were partially repaired, a school was fully rehabilitated, shops had opened, and residents were putting up Christmas decorations.

In June 2017, when I returned to Homs, I saw a city pulsing with life, and peace. That June, I also went back to Aleppo, which I’d been to four times prior to its December 2016 liberation.

I saw eastern areas that had been occupied by Al-Qaeda, Nour al-Din al-Zenki, IS and other terrorist factions. The destruction was indeed immense, as terrorists had holed up underground, including occupying schools and hospitals. The complex housing the Eye and Children’s Hospitals was turned into a headquarters for Al-Qaeda and IS, with basements turned into prisons, prisoners’ fates decided by Sharia courts of the extremists.

I returned to Aleppo in May 2018, and spent hours at the ancient Citadel, both filming people enjoying their time around the Citadel, and later joining them at one of the cafes encircling this historic site. Talking with Aleppo MP, Fares Shehabi, we discussed how none of this had been possible under the rule of the extremists.

Indeed, in November 2016, standing near the ruins of the Carlton Hotel, tunnel-bombed by terrorists in May 2014, and looking towards the Citadel, I was told to step back due to the risk of Al-Qaeda snipers. But the Aleppo I saw in May 2018 was likewise pulsing with life, and peace.

In media campaigns to demonize the Syrian and Russian governments, Western media mentioned al-Waer, Homs, and Madaya. But few, or none, that I’m aware of bothered to go to those places after they were restored to peace. I did, in June 2017, and unsurprisingly heard what journalists in eastern Aleppo heard when those areas were liberated: the reason they had been starving was because terrorists had stolen all the food aid that entered the town and kept it for themselves. Indeed, near a munitions workshop, I found the remnants of one such parcel, a Red Cross package. And like in eastern Aleppo, terrorists in Madaya had imprisoned civilians, and had tortured them.

When in April and May 2018 I went to various areas of eastern Ghouta, I again heard about terrorist-induced starvation. When I asked whether residents could access their farmland – as eastern Ghouta is an agricultural region – I was told that, no, they couldn’t, terrorists controlled the farmland, too, leaving them literally starving.

A few weeks ago I returned to Daraa City. I’d been there in May 2018, at a time when terrorists in Daraa al-Balad and outskirts were heavily shelling the city. At great risk, I was able to go to the state hospital, with snipers just 100 metres away from the sole route leading there. The hospital was severely damaged, with entire wards destroyed. The Children’s Hospital wing was damaged and off limits due to the proximity of terrorists roughly 50 metres away – as I would learn when I returned a few weeks ago.

In Daraa this September, there was no bombing, just the scraping of rubble as bulldozers and residents cleaned up the remnants of this foreign war on Syria.

On September 11, I went to Mhardeh, a town in northern Hama, where 13 civilians were killed by terrorists missiles targeting the town on September 7. Most of the dead were killed right away, others died slowly of critical injuries. One man lost his wife, three young children and mother to the terror attacks. He lost everything.

When I asked him how the situation of Idlib – occupied by at least 70,000 terrorists, a modest estimate – impacted him and Mhardeh, he replied that Idlib is the cause of their suffering.

The September 7 attacks on Mhardeh weren’t the first. To the contrary, the town has been relentlessly targeted for the past 7 years, its local defense commander, Simon al-Wakil, told me.

So did the Presbyterian Church’s Reverend Maan Bitar, who said:

“The gunmen, the terrorists, they are in all the region of Idlib, not just Idlib city. They are also two kilometers from here (in northern Hama). We’ve received more than 7,000 missiles, rockets, and mortars these past eight years. Every time the terrorists feel they are in a critical situation, militarily speaking, from the government, they shell civilians. Nobody spoke about that. For eight years, Mhardeh town is being shelled, and civilians killed, but nobody spoke of that.”

Nearby al-Skalbiyye has also been relentlessly targeted, including with 10 Grad missiles fitted with cluster bombs, as noted by British journalist Vanessa Beeley who visited the town.

With the Nikki Haleys and laptop media now droning incessantly about “3 million civilians” in Idlib prone to being massacred by the Syrian and Russian armies, it’s time to reflect on a number of points.

First of all, there is no accurate figure for the number of civilians in Idlib, much less the number of terrorists. Given that when we heard the same cries before the liberation of Aleppo, with the UN itself chiming in to claim that 300,000 civilians were trapped in Aleppo’s eastern areas – the actual number was less than half that figure – we can at least be sceptical about the current claims of 300,000 in Idlib.

Al-Qaeda’s presence in Idlib isn’t a conspiracy theory, it’s an established fact that even US State Department’s Special Envoy, Brett McGurk, made clear when he said:

The US admits that #Idlib is run by #AlQaeda, AND that they are prepared to go to war to defend AlQaeda. #Syria pic.twitter.com/XsPPLtKBbZ

Yet, outlets like CNN whitewash their presence. While there are no definitive figures for the number of non-Syrians among those terrorists, it is a fact that there are extremists from around the world.

What Western leaders and media fail to address is the reign of terror the different extremist gangs inflict on Syrian civilians. This includes their kidnapping of untold numbers of civilians, particularly children.

Vanessa Beeley wrote this just weeks ago, noting that in a liberated area of eastern Idlib, she was told that over 600 children and adults had been kidnapped by “both the terrorist groups and the #WhiteHelmets” in the last 12 months there.

Further, it is from positions within Idlib governorate that terrorists continue to fire on Aleppo. So in spite of the liberation of Aleppo from these extremists, areas closest to them are routinely bombed.

Fares Shehabi tweeted in September about a rocket attack on Aleppo believed to have originated from Idlib.

In all of the areas I mentioned, the Syrian and Russian governments worked to offer amnesty and reconciliation to Syrians holding arms, and indeed these reconciliations enabled the return to peace in many of these areas.

Syria and Russia have again offered reconciliation and amnesty. It is terrorists within Idlib who refuse this, refuse a political process, and instead continue to hold civilians hostage and occupy Syrian territory.

On September 28, Russia’s Foreign Minister, Sergey Lavrov, addressed media the day of a General Assembly meeting, noting the US-led destruction of both Raqqa and Mosul, Iraq, also noting that Russia and Syria prevented this in Aleppo and in Eastern Ghouta.

These are all points to keep in mind the next time Nikki Haley shrilly performs for the cameras. It is time to liberate Idlib, by military or political means, and bring peace to Syria.