The English word ‘gut’ is rich in its range of meanings. In biology, ‘gut’ means ‘intestine’ – as in ‘gut bacteria’ or ‘gutting a fish’; this meaning extends to the racquet strings used in sports such as tennis and badminton. In common usage, ‘guts’ refers to ‘courage’, as in ‘having the guts to take on the huge challenge of _______’ (fill in your favourite).

A ‘gut reaction’ is an instinctive reaction – as in ‘my gut reaction was not to get involved’. Someone largely devoid of ‘gut reactions’ is said to be insensitive, sluggish, or even zombie-like. On the other hand, highly sensitive persons may even exhibit physiological symptoms caused by their strong ‘gut reactions’. The phrase ‘gut-wrenching’ refers to an experience which evokes intense ‘gut reaction’.

There is no doubt therefore that ‘gut’ is an interesting word; indeed, so interesting that we shall throw light on geopolitics – no less! – using this word!

Without such propaganda, how would ‘the elites’ convince common people to risk their lives in bloody wars? To accept their poverty as an essential element of ‘imperial greatness’? Or to believe that ‘the elites’ will work to ensure their wellbeing?

In a democracy, a good leader senses what common people – his or her support base – need and desire. No doubt the leader also shapes peoples’ aspirations – but he or she cannot get to that stage without first acknowledging their needs and desires. Such interactions among people are an integral part of even an imperfectly functioning democracy.

People’s needs and desires are shaped by the multitude of their ‘gut reactions’ to events of everyday life – ‘on Main Street’, ‘in the village square’ or ‘in the bazaar’. To be successful, a wannabe leader – honest or otherwise – must have his ear to the ground.

Around the world, powerful modern technologies of finance and mass communication are breaking the vital links of functioning democracies. ‘Modern leaders’ rely more on the easily managed ‘virtuality’ of media technologies than on the reality of people’s lives.

In an industrialized society, this fact remains hidden as long as its industrial economy is strong. But when the society loses its industrial strength, its real economy stagnates. Self-proclaimed leaders then turn against the people and feather their own nests – saying, in effect: If there isn’t enough to go around, let me at least grab my fat share!

With the advent of mass media – that is, instruments of mass propaganda – it has become easier to make common people lose confidence in their own ‘gut reactions’, and thereby to make them disoriented. Day after day, year after year, suppose a person is told that: (a) his or her difficulties are justified by ‘a greater cause’, and (b) he or she is ‘not as good as the elites’. Would the person not lose confidence in his or her own judgement?

This happens by conscious design and manipulation – because disoriented populations are easier to exploit as lackeys, serfs, debt-slaves or cannon fodder.

A sound desideratum of ‘education’ is that an educated person should be able to interpret events correctly and choose the course which leads to his or her durable wellbeing. Indeed, this criterion defines a healthy, functioning individual.

‘The elites’ would prefer to nip such tendencies in the bud. Their business and political model relies on simple people remaining ignorant. Therefore simple people – who wish only to get on with their simple lives – must today learn the vile tricks of their exploiters; or else even their proverbial pitchforks will prove useless.

No political philosophy should ignore the simple people’s concerns and modest needs. These people are acutely tuned in to events around them – in towns and villages – as they struggle for a modicum of well-being amidst hardship and the arrogance of power.

Well-functioning societies provide channels of communication for the knowledge of such ‘ground realities’ to be factored into political decisions. The channels consist of community leaders, farmers, traders, union leaders, party workers, religious groups … and so on.

Nevertheless, when policymakers rely on slick analyses divorced from reality, the resulting policies are ‘castles in the air’ – that is, ‘gutless’ policies in the sense of citizens authentic ‘gut reactions’ not being taken into account.

Policy divorced from reality is based on false assumptions, empty verbiage and wishful bombast; but it is driven by fierce personal ambition. No test of truth is built into analyses. The only important factor is: Who has whose ear? In such conditions, policymaking is no more than a futile ‘game of thrones’ played out in ‘the corridors of power’.

People engaged in such forms of unworkable policy can be called ‘gutless wonders’ – they are divorced from reality, and are living in wonderland. In such policymaking processes, it is immaterial whether incompetence is at work, or malevolence, or a mix thereof. The same problems are created, whether the perpetrators are ‘evil’ or merely stupid.

When fear and greed rule markets and societies, delusion runs rampant. ‘Think tanks’ provide paid lobbying services rather than sound scholarship – but in a ‘dumbed-down’ society, who can tell the difference? Huge bureaucracies serve only themselves.

‘International community’ is today code for an extremely narrow view of how world affairs should be managed. The view champions ‘freedom’ – but the gutless wonders pushing the view are not free-standing individuals. Mostly they are pampered nerds, unable to tolerate the slightest difference of opinion or the slightest view of human suffering. They are puffed up by immense bureaucratic power and billions of dollars worth of fiat currency.

Gutless wonders devise elaborate and expensive schemes for ‘global welfare’ – while ensuring in the process only their own welfare. After disguising cleverly their own fears and greed, they present themselves as being ‘professional’, free from fear and greed. Many of the ‘academic degrees’ popular today provide mainly the camouflage needed for a person to function as an efficient-sounding and ‘politically correct’ gutless wonder.

Gutless wonders today seem to be straddling the world – not with valiant armies, but with fiat currencies, financial and legal skulduggery, bribes, propaganda and cunning. Their only apparent goal in life is ever more power and wealth.

In actual fact this never-ending grab for power and wealth indicates morbidity, a very deep-seated insecurity. As a result, shameless moral and logical contortions are used towards their aims – ‘whatever it takes’, in a famous phrase.

‘Globalism’ is propagated by such gutless, scheming cowards. Invariably, these cowards benefit from having ‘friends and relatives in high places’. But, without batting an eyelid, they would also sell their aging grandmothers if the price is right. Untold human misery created in faraway lands does not ever deserve an entry in their cooked-up account books.

Gutless wonders work from behind the thick walls of bureaucracies and think tanks, and live in heavily-guarded communities. All the time that they hatch their frenzied schemes, they are protected by cronies and by paid politicians, academics, lawyers, and accountants. 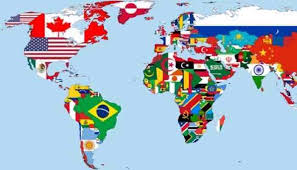 You will never hear the following from globalist gutless wonders.

A ‘nation’ is not merely a ‘narrow identity label’. Belonging to a cohesive community is an essential part of human nurture and culture – and a basic human right of a child and an adolescent. The idea of ‘nationhood’ can be pilloried only by ignoring the priceless care and nurture which is provided in families, neighbourhoods and communities.

‘Nationalism’ is a force for good if it is defined by people who care for their own – without bearing any ill will towards others. Nationalism does not have to be defined by hatred. It can and should be accompanied by mutual respect and non-interference.

‘Globalism’ is today devoid of compassion. It is defined instead by global legal rights to exploit, to buy and sell, to pass hidden costs to the weak, to destroy ecosystems, to avoid paying taxes – and to loudly enforce a monopoly on morality and ethics. An apt phrase applicable to this ‘modern’ mindset would be ‘The Ugly Globalist’, or we may call it the newest version of ‘exceptionalism’.

All over the world, fair-minded human beings – whether white, black, brown, pink, or yellow – need to understand clearly what they are up against. Obfuscation is the deadliest weapon of the gutless wonders – who paint themselves as the best and the brightest, the purest of the pure; so bright and pure that they can tell all others how to behave.

What is absent in them is humility attained through a true understanding of human reality. They do not seem to understand that arrogance closes the door to truth and understanding, and that wisdom flows from true comprehension of suffering.

Therefore, when something goes wrong, their wail goes: Mummy, look! These bad and uncivilized people are not allowing us to teach them and to cheat them! Didn’t you tell us that was their manifest destiny?

A spirit of ‘healthy nationalism’ is distinguished by care for one’s fellow nationals, without any ill will towards other nations.

In this sense, ‘nationalism’ matters because human relations matter, traditions matter, self-respect matters. These priceless human values are not to be sacrificed at the altars of fake ideologies, power and wealth — that is to say, ‘tools of trade of the globalists’.

Is multilateralism possible in this world without mutually respectful ‘nationalism’ all around? There are some two hundred ‘countries’ in the world; almost all of them are made up of several different ‘intramural nations’. Therefore the innate spirit of ‘nationalism’ cannot be legislated out of existence. Indeed, a healthy society does not need much written legislation – whereas badly written legislation only makes things worse.

What needs to be articulated clearly is that, in a multilateral world with hundreds of nationalities, each nation must free itself of hatred towards others. Is it possible to aim towards such ‘healthy and mutually respectful nationalism’, free from hatred?

We should certainly hope so – because the alternative is grim!

In fact, the biggest threat to healthy and mutually respectful nationalism is the ‘divide-and-conquer’ mindset of the globalist gutless wonders!

If a rich diversity of views is to be respected amongst individuals, and also within a society, then why should diversity not be cherished globally? Why must ‘modernity’ or ‘progress’ be defined as creeping homogenization across the world?

No human compassion underlies this ‘creepy’ tactic. Only one explanation of this creeping homogenization makes economic sense: That it helps rapacious agents of globalisation to do their work of serial economic depredation.

The gutless wonders – also known as think-tank nerds – seem to be saying:

Gutless wonders malign ‘nationalism’. Compassion for one’s neighbours is maligned as ‘narrow-mindedness’, while sham compassion forms the sham basis for ‘globalization’. The strategy seems to be to mess up the prospective victims’ traditions, culture, thoughts, feelings and communities – so as to then vanquish them with greater ease.

Gutless wonders who say this is not possible are ‘grinding their axes’ – with a gleam of world domination in their eyes. Clearly, those who go to great lengths to insulate themselves from human suffering cannot be relied upon to lessen human suffering. Their actions – begotten of insecurity and greed – will only add to human suffering.

Anticopyright: Editorials and articles originated on TMS may be freely reprinted, disseminated, translated and used as background material, provided an acknowledgement and link to the source, TMS: Gutless Wonders, is included. Thank you.