Taibbi: Why Aren’t We Talking More about Trump’s Nihilism?

The White House now says we might as well pollute because global catastrophe is inevitable. 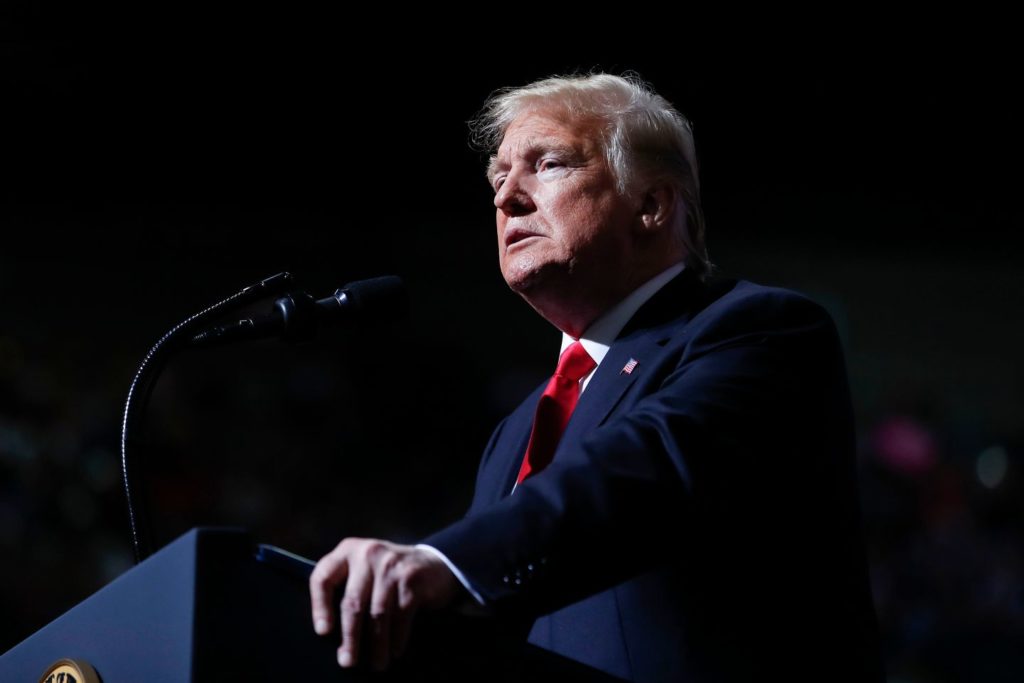 The study predicts a rise in global temperatures of about four degrees Celsius, or seven degrees Fahrenheit, by the year 2100. Worse, it asserts global warming is such an inevitable reality, there’s no point in reducing auto emissions, as we’re screwed anyway.

“The emissions reductions necessary to keep global emissions within this carbon budget could not be achieved solely with drastic reductions in emissions from the U.S. passenger car and light truck vehicle fleet,” is how the report put it.

To make a real difference, it adds we’d have to “move away from the use of fossil fuels,” which is “not currently technologically feasible or economically practicable.”

There’s been just a flutter of media attention about this, mostly focusing on the hypocrisy. Trump, as is his wont, has at one point or another occupied basically every inch of territory on the spectrum of global warming opinions.

He went from urging President Obama to act to prevent “catastrophic and irreversible consequences… for our planet” (2009), to calling global warming a Chinese conspiracy (2012), to calling it an “expensive hoax” (2013), and “bullshit” (2014), to switching up again during the election to concede the existence of “naturally occurring” (i.e., not man-made) climate change.

Now comes this Linda Blair-style head turn. The NHTSA report deftly leaps past standard wing-nut climate denial and lands on a new nihilistic construct, in which action is useless precisely because climate change exists and is caused by fossil fuels.

The more you read of this impact statement, the weirder it seems. After the document lays out its argument for doing nothing, it runs a series of bar graphs comparing the impact of various action plans with scenarios in which the entire world did nothing (labeled the “no action” alternative).

These absurd illustrations make Thomas Friedman’s time-traveling efforts to graph the future seem like the work of a Nobel laureate.

“A textbook example of how to lie with statistics,” is how MIT professor John Sterman described it to the Post.

There’s obviously a danger at overinterpreting this paper, which mostly seems like a desperate bureaucratic attempt to square science with Trump’s determination to roll back environmental policies for his business pals.

But even as accidental symbolism, it’s powerful stuff. A policy that not only recognizes but embraces inevitable global catastrophe is the ultimate expression of Trump’s somehow under-reported nihilism.

While the press has focused in the past two years either on the president’s daily lunacies or his various scandals, the really dangerous work of Trump’s administration has gone on behind the scenes, in his systematic wreckage of the state.

Implicit in this campaign of bureaucratic dismantling has been the message that pandemonium is a price Trump is very willing to pay, in service of breaking the “disaster” of government. Many of his top appointees have been distinguished by their screw-it-all mentality.

Remember, he appointed Mick Mulvaney, a man who had once inspired a downgrade of America’s credit rating by threatening to default on the debt, to be his budget director.

He later put Mulvaney in charge of the Consumer Financial Protection Bureau, where he fired his own 25-person advisory board — after requesting a budget of $0 and promising to fulfill the bureau’s mission “no further.”

Trump’s original EPA chief, Scott Pruitt, was best known for having used his time as Oklahoma’s attorney general to sue the EPA repeatedly and zero out the environmental-enforcement budget. Trump made a robotization enthusiast his choice for labor secretary, chose a hockey-team owner to run the Army (he withdrew, thankfully), and so on.

There are still hundreds of top federal jobs left unmanned, and some of the non-appointments seem like Nero-level acts of madness. Trump asked for 25 percent cuts to the whole State Department on the grounds that they were “prioritizing the efficient use of taxpayer resources.” But what country goes without ambassadors for years? Trump fired dozens upon inauguration and to this day still has 34 vacancies. We have no ambassador in South Africa, Sweden, Saudi Arabia, even Mexico. We’re a ghost state with nukes.

All of this is part and parcel of Trump’s doomsday message. He’s been a textbook example of Richard Hofstadter’s famed theory of paranoid politics. See if any of this (especially the line about “barricades”) sounds familiar:

The paranoid spokesman sees the fate of conspiracy in apocalyptic terms — he traffics in the birth and death of whole worlds, whole political orders, whole systems of human values. He is always manning the barricades of civilization… Like religious millennialists, he expresses the anxiety of those who are living through the last days…

From Day One of Trump’s campaign, pundits have reached for traditional political explanations to describe both his behavior and his appeal. Because we’re trained to talk in terms of left and right, progress and reaction, we tried to understand him in those terms.

But Trump sold something more primal. His core message was relentless, hounding negativity, lambasting audiences with images of death and disaster.

His first campaign speech was basically a non-denominational end-times sermon, in which America was either kaput or close to it, surrounded on all sides by bloodthirsty enemies. “They kill us,” he preached. “They beat us all the time… We have nothing…”

He ranted about a system befouled by false prophets. “Politicians are all talk, no action,” he howled. “They will not bring us— believe me — to the promised land.”

The “What have you got to lose?” line he pulled out later was supposedly just a pitch to African-American voters, but all of Trump’s audiences picked up on the “it just doesn’t matter” theme. (If you want to be wigged out, check out the similarities between Trump speeches and the famed Bill Murray speech from Meatballs. Just substitute “China” for “Mohawk.”)

Obese and rotting, close enough to the physical end himself (and long ago spiritually dead), Trump essentially told his frustrated, pessimistic crowds that America was doomed anyway, so we might as well stop worrying and floor it to the end.

If that meant a trade war, environmental catastrophe, broken alliances, so be it. “Let’s just get this shit over with,” is how Trump’s unofficial campaign slogan was described in the show Horace and Pete, one of the few outlets to pick up on Trump’s Freudian death-wish rhetoric.

Trump made lots of loony promises to bring us back to the joyous Fifties (literally to Happy Days, if you go by his choice of Scott Baio as a convention speaker). But even his audiences didn’t seem to believe this fable.

The more credible promise of his campaign was a teardown of the international order, which he’s actually begun as president. Trade deals, environmental accords, the EU, NATO, he’s undercut all of them, while ripping government in half like a phone book.

He keeps inviting destruction like it’s a desirable outcome. He even pushed through legislation for “low-yield” nuclear weapons, whose only purpose is to be more theoretically usable than the other kind (although he’s wrong about this, too).

His fans even cheered when he played nuclear chicken with Kim Jong-un, tweeting that his “nuclear button” was “bigger & more powerful” than Kim’s (and “my Button works!”).

It’s easy to understand the nationalist sentiment behind reversing trade deals or backing Brexit. But what’s the populist angle on burning the planet, or nuclear war? How does hating elites explain cheering a guy on for turning nuclear diplomacy into a penis-measuring contest?

On a policy level, this apocalypse politics is pure corporate cynicism, with Trump’s big-business buddies showing a willingness to kill us all for a few dollars now.

The broader electoral pitch is just an evil version of every nuclear-age dance tune ever, “99 Luftballoons” or “1999.” The world is ending, so fuck it, let’s party. As crazy as it is, it’s a seductive message for a country steeped in hate and pessimism. Democrats still don’t understand it. Trump’s turning America into a death cult, with us as involuntary members.

Matt Taibbi is a contributing editor for Rolling Stone. He’s the author of five books and a winner of the National Magazine Award for commentary. taibbimedia@yahoo.com.