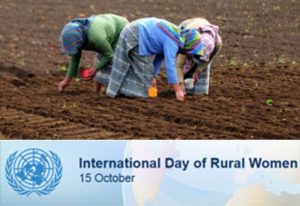 15 October is the U.N. designated International Day of Rural Women.  It is a day in which to highlight the need to increase food production, especially in those countries that face a persistent food deficit.  There is a need to increase production, create better storage methods to prevent post-harvest loss, and improve distribution methods.

Women play a crucial role in every link of the food chain: production, storage, marketing, and finally in the preparation of food for the family.  Therefore it is important to look at some of the blocks and drawbacks that prevent better production and to analyse the persistent inequalities and discrimination that women face at the village level — discrimination in schooling, especially at the technical and higher levels, discrimination in land ownership and land tenure, discrimination in inheritance of land and access to resources. We must look at what factors stand in the way of transforming gender relations and of eliminating gender inequalities.  Promoting gender equality is an important part of a development strategy that seeks to enable all people — women and men alike — to escape poverty and to improve their standard of living.

We must look not only at drawbacks but also at giving special attention to methods used for the empowerment of women and gender equality in the food cycle. There are a growing number of households headed by women in rural areas.  The reasons vary but most often are associated with migrations, divorce, abandonment, widowhood, civil strife, and absent-father adolescent parenthood. I will use examples from Sub-Saharan Africa and Asia where I have worked.

The division of labor between men and women in agriculture can vary greatly from one ethnic group to another even within a limited region and often concerning the same crops and activities.  That is why all generations are dangerous and why detailed study of specific patterns is important.  A useful tool for study is the gender tool kits prepared by the World Bank’s Gender Analysis and Policy Section.  While one may be justly critical of some of the World Bank’s loans and policy directives, the Bank has developed good guides for research such as Monica Fong and Anjana Bhushan’s Toolkit on Gender in Agriculture. See the Bank’s GenderNet (www.worldbank.org/gender). The Net has two subsection on gender in Africa and gender in Latin America and the Caribbean. (1)

While recalling the danger of generalizations, there are nevertheless certain patterns that one finds so often that such patterns merit special attention — such as food preparation nearly exclusively by women.  Thus, it is important to note both the work in the fields, at the market, but also in the home with the preparation of food and care of children if we want to have a complete picture of the role of women. Household division of labor needs to be looked at closely.  Because women in Vietnam do the household budgeting, it is often assumed that women do not need independent access to resources and that they have full control over household income regardless of who earns it.  Field research now indicates that this is not always the case and thus it is necessary to look closely at the decision-making structure of rural households to see if there are unmet needs.

It is also important to look at trends.  Thus a field study has shown that in parts of Uganda traditional food crops such as maize and beans are increasingly commercialized by men rather than women as in the past. Now, it is often the husband who has taken over the selling of crops and the collection of payments.  As the price of food has gone up, women have become increasingly marginalized rather than empowered.  The asymmetry of power between men and women remains a pervasive trait of gender relations throughout the world.  When there are new ways to make money, men will push to get a major share.

In addition to the physical divisions of labor between women and men, with which the World Bank guides help us, we must also look at the belief systems, the agricultural rituals and ceremonies.  The world of the spirits is often sharply divided between the masculine and the feminine — the Yin and the Yang.  Among the Fali of Northern Cameroon, fields are designated as masculine or feminine.  Thus, a female seed must be planted in a male field and a male seed in a female field. See Jean-Paul Lebeuf  L’habitation des Fali (Paris 1962)

The woman, who brings a child into the world, has a particular role in the fertility of crops — often being the only one who can plant seeds.  Among many African groups, the corn seeds are first dipped in menstrual blood before planting, while at other times menstrual blood is considered unclean and certain places or activities are forbidden to the women during this period.

The image of a woman as the ‘mother’ of the plant or a tree is a widespread image even in those societies where there is gender inequality in other ways.  The world of the spirits is often overlooked by development agencies though the system of belief is the background for all agricultural development.  See Maning Nash The Golden Road to Modernity: Village Life in Contemporary Burma (New York, 1965).

The current interest in micro-finance and micro-enterprises has highlighted the role of women in the production and marketing of food and village-made handicrafts.  The loan recovery rate of loans to women is very high. However, many loans are on a very short-term basis, and the commercial activity is often too small to grow beyond self-employment.  There is a need to teach women financial planning skills so that their enterprises may grow and thus increase employment of others.  Efforts should be made to link financial services to skill development training.  Financial services must be established closer to homes, markets and work places so that women can have greater access to savings and credit.

The transformation of women’s economic activities requires profound reforms, for example: policies giving women access to land and assets, credit and appropriate technology, greater training and measures to promote independent work by women.  If women are to benefit from their already considerable role in food production, more gender sensitive approaches are needed in the formation of economic and social development programs.

1) In addition see two research programs of the U.N. Research Institute for Social Development. The first was a series of reports on popular participation underlining the role of women in agricultural movements for greater justice and land rights. See Gail Omvedt. Women in Popular Movements: India and Thailand during the Decade of Women (Geneva: UNRISD, 1986.

The second UNRISD program was a systematic approach of looking at the food chain from seed to food on the table showing who is active at every stage.  See Rolando Garcia. Food System and Society: A Conceptual and Methodological Challenge (Geneva: UNRISD, 1984)

Anticopyright: Editorials and articles originated on TMS may be freely reprinted, disseminated, translated and used as background material, provided an acknowledgement and link to the source, TMS: Women’s Critical Role in the Food Chain, is included. Thank you.