Khieu Samphan and Nuon Chea are the two most senior living leaders of regime that presided over deaths of at least 1.7 million in Cambodia. 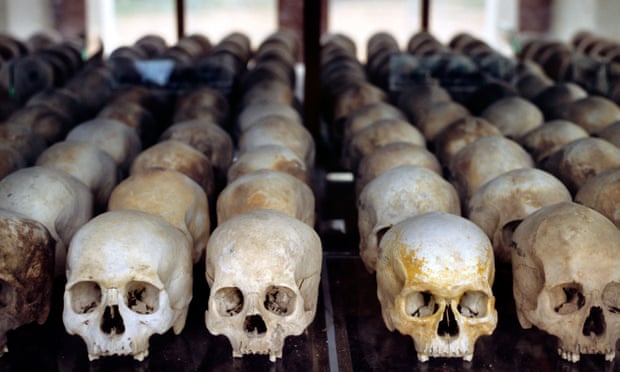 About two million people died during Cambodia’s Khmer Rouge regime. Two of its senior leaders have been on trial on charges of genocide.
Photograph: MARKA / Alamy Stock Photo/Alamy Stock Photo

Nuon Chea, 92, who was second-in-command to Pol Pot, and Khieu Samphan, 87, who served as head of state, were both sentenced to life imprisonment for genocide and crimes against humanity carried out between 1977 and 1979, in what is a landmark moment for the Khmer Rouge tribunals. The pair are already serving life sentences for crimes against humanity.

As senior figures in the Khmer regime, the court declared both men responsible for murder, extermination, enslavement, deportation imprisonment, torture, persecution on religious, racial and political grounds, enforced disappearances and mass rape through the state policy of forced marriages .

The verdict, read by Judge Nil Nonn, gave a detailed account of some of the most horrific actions carried out by the regime, particularly focusing on the infamous S-21 security prison and execution site where tens of thousands were killed. Interrogations, and executions were carried out under the direct instruction of those in the “upper echelons, including Nuon Chea”, who oversaw S-21 for two years.

“The chamber finds that prisoners were brought to interrogation rooms, handcuffed and blindfolded, their legs chained during questioning” said Nil Nonn, adding that interrogation methods included “beatings with sticks, rocks, electrical wire, whips, electric shocks and suffocation and the extraction of of toenails and fingernails.”

As the list of the regime’s crimes were read out in detail, Nuon Chea asked to be excused from the court on the basis of ill health.

The judgment also emphasised that Khieu Samphan “encouraged, incited and legitimised” the criminal policies that lead to the deaths of civilians “on a massive scale” including the millions forced into labour camps to build dams and bridges and the mass extermination of Vietnamese. Buddhist monks were forcibly defrocked while Muslims were forced to eat pork.

David Scheffer, who was UN secretary general’s special expert on assistance to the Khmer Rouge trials and the former US ambassador at large for war crimes issues, described the genocide verdict as “very significant”. “This is comparable, in Cambodia, to the Nuremberg judgment after world war two,” Scheffer told the Guardian. “That is worth the money and effort.”

On Friday morning the courtroom in the capital of Phnom Penh was packed with families of some of the 1.7 million Cambodians who died between 1975 and 1979, through a combinations of mass executions, starvation and brutal labour camps, in one of the worst atrocities of the 20th century.

“It was such an evil regime and it was the worst example of what a government can do,” said prosecutor Nicholas Koumjian. “I think this verdict is a very timely and very necessary. The fact that these crimes happened 40 years ago in no way diminishes the impact of this verdict for those who were affected by the crimes, people whose parents were tortured and killed.” 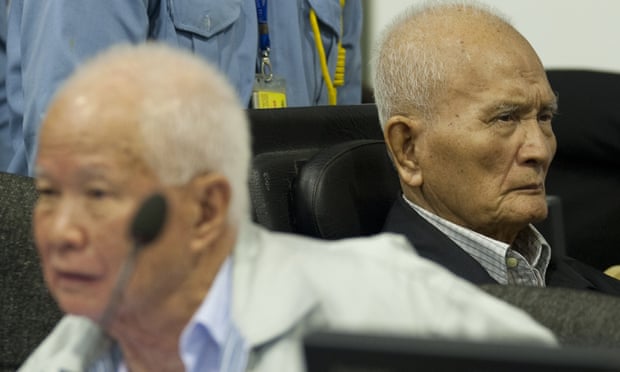 While neither Nuon Chea and Khieu Samphan disputed their roles as pivotal figures in the Khmer Rouge communist regime – whose repressive policies of agricultural collectivisation and social engineering led to famine and saw hundreds of thousands put into labour camps – they both denied genocide. By the time the regime was ousted by Cambodian dissidents and Vietnamese troops in 1979, about 25% of Cambodia’s population had died.

Victor Koppe, the lawyer for Nuon Chea, told the Guardian the case at the extraordinary chambers in the courts of Cambodia (ECCC) had been conducted “very unfairly” and had served simply to prop up a version of history that suited the current government. Many of today’s government figures, including Prime Minister Hun Sen, served in the Khmer Rouge regime before defecting.

“In 10 or 20 years from now, when the dust has settled, people will look back on this as a complete waste of time and energy and resources,” he said.

He was echoed by Anta Guisse, the lawyer for for Khieu Samphan, who said that due to the symbolic importance of securing convictions, neither of the defendants had been given a fair trial. Both Koppe and Guisse confirmed they would be appealing the convictions.

The Khmer Rouge trials have been plagued by criticism since the ECCC was formed in 1997 through a conjoined effort by the UN and the Cambodian courts to try the “most senior” Khmer Rouge members. It took nine years to get the first case to trial and, 12 years and $320m later, it has convicted only three men. Most of those responsible for the killings, including Pol Pot, died before they could be tried.

The first life sentence was handed to Kaing Guek Eav, known as Comrade Duch, who ran S-21 concentration camp in Phnom Penh where at least 14,000 people were tortured and killed. In 2014, Nuon Chea and Khieu Samphan were then found guilty of crimes against humanity.

Their second trial, for genocide and mass rape, drew to a close in June last year but the verdict has taken 18 months to reach by the panel of three Cambodian and two international judges.

Many have criticised the tribunals for moving at a glacial, and very expensive pace, and being susceptible to political interference from Hun Sen’s government. Prosecutor Koumjian said he “wished things had gone faster and that more people had been prosecuted”.

But Alexander Hinton, director of the Centre for the Study of Genocide and Human Rights, and UNESCO chair on genocide prevention at Rutgers University, said: “Justice is not perfect. But it’s better than no justice. And what’s the alternative? Impunity for mass murder.”

There are three Khmer Rouge commanders who are still awaiting trial but the future of the ECCC remains uncertain, mainly due to resistance from Hun Sen who has long opposed the trials and said that any more cases risked pushing Cambodia into civil war.

“But in the end the court delivered,” he added. “There may just have been three judgments, but the process proceeded with the rule of law. I expect most Cambodians will take this court, warts and all.”