Light and Luminosity: The Moon and the Sun in Our Lives

5 Nov 2018 – The planet Earth gets its light as well as life from the Sun. If there was no Sun, life – human, plant or animal, would not be possible on our planet. The Sun shines on different regions of the Earth for variable times depending on the season — it could be about twenty-two hours during the summer months in the northern parts of the globe and only an hour or less during winter in the same regions. The reverse is true for southern parts of the Earth such as the Antarctic. 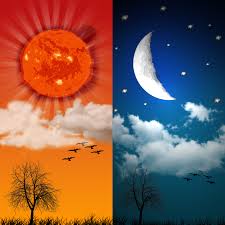 However, for most regions of the Earth, let us assume that on an average we receive sunlight for about half a day or twelve hours. What about the nighttime? During the night we have moonlight— not as bright as the Sun but soothing and refreshing to us human beings. The moon’s monthly waxing and waning results in a full moon day, when it shines brightly and gives us a sense of peace and tranquility. Again on Amavasya (New Moon, when it is visible only in a semi-circumference crescent shape), we feel somewhat forlorn and our sages and religious persons have asked us to be vigilant and sober on that day.

Scientists have determined that tidal waves that arise due to the Moon’s attraction on the seas and oceans, have a positive effect on plant growth and indirectly on life itself. Tidal waves have also been used for producing electric power, especially in France.

Apart from the changing shapes of the Moon, there are also events such as lunar eclipse and solar eclipse, each of which has a scientific explanation based on the movements of the Moon around the Earth and the earth’s revolution around the Sun. These eclipses display their own charm and beauty. In India we had simple observatories known as Jantar Mantar which explained the occurrence of eclipses as well as predicting when the next eclipse would occur, long before western science could predict their occurrence.

It is also known that our annual calendar is based on the revolution of the Earth around the Sun and the motion of the Moon around the Earth. The former gives us the common solar calendar with 365 days in a year; whereas the latter is known as lunar calendar that is about 28 days in duration in a month.  Events that are based on lunar calendar vary from one year to the next. For example, the month of fasting for Muslim people, called Roza, shifts from year to year. Sometimes it falls in summer and then gradually moves to the winter months and back again, after a few years to summer.

The Moon and the Pole Star have been guiding hundreds of sea travelers moving from one region to another in their boats when modern equipment was not available to determine the position in the seas.

Over the centuries, the Moon has not only given us moonlight but also has been a symbol of beauty and waywardness because of its changing shapes (as visible from the earth). Poets have written beautiful verses about our celestial neighbor and when describing a pretty woman, have compared her with the Moon.

“I want to be in love with you, the same way I am in love with the moon …” wrote Sanober Khan, a Mumbai based poetess.

William Shakespeare wrote in his famous drama Romeo and Juliet, “Do not swear by the Moon for she changes constantly, then your love will also change”.

Comparing the changing shapes of the moon, Mark Twain, the well-known American author felt that “We are like the Moon, and have a dark side which we never show to anyone.”

Carl Sandburg another American author and biographer wrote “The Moon is a friend for the lonesome to talk to”.

In Hinduism, the Moon is called Chandrama or simply Chanda and Soma is known as the Moon God. Based on this analogy, the days of the week start with Somvaar (Monday), and then continue as mangalvaar, budhvaar, brahspativaar, shukravaar, shanivaar and ravivaar. These names are derived from the Hindu names of the Sun’s planets respectively — Mars, Mercury, Jupiter, Venus, Saturn and finally the Sun. The French names for the week are also based on French names of the planets around the Sun starting with Lundi (Monday).

Hindi films have beautiful melodious songs — many on aspects of love and longing. One such is “Voh Chand Khila, voh Taare hase, yeh raat ajab matvaali hai (The Moon is shining bright, the stars are smiling, the night is romantic …)

“Ek raat mein do do Chand Khile— ek ghoonghat mein, ek Badri mein “(The night has two moons — one in your veil, the other in the Clouds).

The Moon has been studied by scientists and astronomers from different perspectives – one of which was whether there was water on the moon’s surface. For a long time, USA and Russia wanted to send men to land on the Moon. After many attempts, finally two American astronauts — Neil Armstrong and Edwin Aldrin circled the moon in their Apollo 11 spacecraft and landed on the moon in their lunar module Eagle on July 20, 1969. An amazing unbelievable feat thanks to modern science and technology. Subsequently, other astronauts have also landed on the moon.

Despite this fantastic scientific feat, the Moon continues to enthrall ordinary men and women and beautiful and nostalgic poems and songs continue to be written on its luminosity. It continues to be a symbol of love, longing and religious harmony.

Anticopyright: Editorials and articles originated on TMS may be freely reprinted, disseminated, translated and used as background material, provided an acknowledgement and link to the source, TMS: Light and Luminosity: The Moon and the Sun in Our Lives, is included. Thank you.