We Treat Nations as though They Were Individuals

Under the Fourth Geneva Convention, collective punishment is war crime. Article 33 states that “No protected person may be punished for an offense that he or she did not personally commit.”

At present, we treat nations as though they were persons: We punish entire nations by sanctions, even when only the leaders are guilty, even though the burdens of the sanctions fall most heavily on the poorest and least guilty of the citizens, and even though sanctions often have the effect of uniting the citizens of a country behind the guilty leaders. Should we not regard sanctions as collective punishment? If we do so, then sanctions are a war crime, under the Fourth Geneva Convention.

Much can be criticized in the way that the Gulf War of 1990-1991 was carried out. Besides military targets, the US and its allies bombed electrical generation facilities with the aim of creating postwar leverage over Iraq. The electrical generating plants would have to be rebuilt with the help of foreign technical assistance, and this help could be traded for postwar compliance. In the meantime, hospitals and water-purification plants were without electricity. In addition, during the Gulf War, a large number of projectiles made of depleted uranium were fired by allied planes and tanks. The result was a sharp increase in cancer in Iraq. Finally, both Shiites and Kurds were encouraged by the Allies to rebel against Saddam Hussein’s government, but were later abandoned by the allies and slaughtered by Saddam.

The most terrible misuse of power, however, was the US and UK insistence the sanctions against Iraq should remain in place after the end of the Gulf War. These two countries used their veto power in the Security Council to prevent the removal of the sanctions. Their motive seems to have been the hope that the economic and psychological impact would provoke the Iraqi people to revolt against Saddam. However, that brutal dictator remained firmly in place, supported by universal fear of his police and by massive propaganda. The effect of the sanctions was to produce more than half a million deaths of children under five years of age, as is documented by UNICEF data. The total number of deaths that the sanctions produced among Iraqi civilians probably exceeded a million, if older children and adults are included. 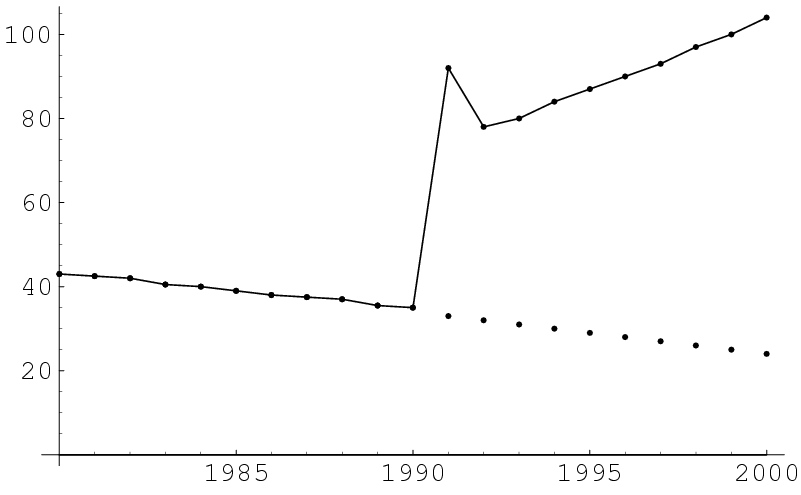 Deaths of children under five years of age in Iraq, measured in thousands. This graph is based on a study by UNICEF and shows the effect of sanctions on child mortality. From UNICEF’s figures, it can be seen that the sanctions imposed on Iraq caused the deaths of more than half a million children.

Ramsey Clark, who studied the effects of the sanctions in Iraq from 1991 onwards, wrote to the Security Council that most of the deaths “are from the effects of malnutrition including marasmus and kwashiorkor, wasting or emaciation which has reached twelve per cent of all children, stunted growth which affects twenty-eight per cent, diarrhea, dehydration from bad water or food, which is ordinarily easily controlled and cured, common communicable diseases preventable by vaccinations, and epidemics from deteriorating sanitary conditions. There are no deaths crueler than these. They are suffering slowly, helplessly, without simple remedial medication, without simple sedation to relieve pain, without mercy.”

The sanctions that the Trump Administration has currently imposed on Iran are also an example of collective punishment. They are damaging the health of ordinary Iranian citizens, who can in no way be blamed fro the policies of their government. According to Wikipedia: “Pharmaceuticals and medical equipment do not fall under the international sanctions, but the country is facing shortages of drugs for the treatment of 30 illnesses, including cancer, heart and breathing problems, thalassemia and multiple sclerosis, because Iran is not allowed to use International payment systems…. In addition, there are 40,000 hemophiliacs who can’t get anti-clotting medicines… An estimated 23,000 Iranians with HIV/Aids have had their access to the drugs they need to keep alive severely restricted.”

In addition to the fact that sanctions are a form of collective punishment, and thus a war crime under the Fourth Geneva Convention, we should also remember that Iran is completely within its rights under international law and under the NPT.

Israel, Iran, and the NPT

The NPT was designed to prevent the spread of nuclear weapons beyond the five nations that already had them; to provide assurance that “peaceful” nuclear activities of non-nuclear-weapon states would not be used to produce such weapons; to promote peaceful use of nuclear energy to the greatest extent consistent with non-proliferation of nuclear weapons; and finally, to ensure that definite steps towards complete nuclear disarmament would be taken by all states, as well steps towards comprehensive control of conventional armaments (Article VI).

The non-nuclear-weapon states insisted that Article VI be included in the treaty as a price for giving up their own ambitions. The full text of Article VI is as follows:

“Each of the Parties to the Treaty undertakes to pursue negotiations in good faith on effective measures relating cessation of the nuclear arms race at an early date and to nuclear disarmament, and on a Treaty on general and complete disarmament under strict international control.”

The NPT has now been signed by 187 countries and has been in force as international law since 1970. However, Israel, India, Pakistan, and Cuba have refused to sign, and North Korea, after signing the treaty, withdrew from it in 1993.

According to Wikipedia, Israel’s first Prime Minister, David Ben-Gurion was “nearly obsessed with obtaining nuclear weapons”, and under his administration, work on obtaining these weapons for Israel was started in 1949.

“In 1949 Israeli scientists were invited to the Saclay Nuclear Research Centre, this cooperation leading to a joint effort including sharing of knowledge between French and Israeli scientists especially those with knowledge from the Manhattan Project… Progress in nuclear science and technology in France and Israel remained closely linked throughout the early fifties… There were several Israeli observers at the French nuclear tests and the Israelis had unrestricted access to French nuclear test explosion data.”

“When Egyptian President Gamal Abdel Nasser nationalized the Suez Canal, France proposed Israel attack Egypt and invade the Sinai as a pretext for France and Britain to invade Egypt posing as ‘peacekeepers’ with the true intent of seizing the Suez Canal. In exchange, France would provide the nuclear reactor as the basis for the Israeli nuclear weapons program. Shimon Perez, sensing the opportunity on the nuclear reactor, accepted.”

“Top secret British documents obtained by BBC Newsnight show that Britain made hundreds of secret shipments of restricted materials to Israel in the 1950s and 1960s. These included specialist chemicals for reprocessing and samples of fissile material, uranium-235, in 1959, and plutonium in 1966, as well as highly enriched lithium-6, which is used to boost fission bombs and fuel hydrogen bombs. The investigation also showed that Britain shipped 20 tons of heavy water directly to Israel in 1959 and 1960 to start up the Dimona reactor.”

Here we see both France and Britain as gross violators of the NPT, since the NPT forbids nations possessing nuclear weapons helping other nations to obtain them. The United States government knew what was happening, but prevented the knowledge from becoming public.

Israel completed its first nuclear weapons in the early 1960’s. The country is now thought to have 100 to 300 of them, including hydrogen bombs and neutron bombs. Israel’s government maintains a policy of “nuclear opacity”, meaning that while visibly possessing nuclear weapons, it denies having them.

The Human Impact of Sanctions against Iran

In a November 6, 2018 article in the Internet journal Countercurrents, Medea Benjamin wrote:

“Iranian government officials want to know how the Trump administration can get away with punishing Iran and other countries for complying with the internationally recognized nuclear deal signed in 2015.

“’The US is, in effect, threatening states that seek to abide by Resolution 2231 with punitive measures,’ said President Rouhani. ‘This constitutes a mockery of international decisions and the blackmailing of responsible parties who seek to uphold them.’…

“This is the second round of sanctions since Trump pulled out of the Iran nuclear deal, a deal that was signed in 2015 not only by the US and Iran, but also by Germany, England, France, Russia and China – and approved unanimously by the UN Security Council. It’s also a deal that has been working. Iran has been complying with the most intrusive inspections regime ever devised, as the International Atomic Energy Agency has confirmed 13 times.

“Trump, always ready to bulldoze international agreements, unilaterally withdrew from the deal and imposed a first round of sanctions in August and the second round now. These sanctions are designed to stop not just US companies from trading with Iran, but all companies – anywhere in the world. According to Treasury Secretary Steve Mnuchin, ‘Any financial institution, company, or individual who evades our sanctions risks losing access to the U.S. financial system and the ability to do business with the United States or U.S. companies.’ In effect, the Trump administration, practicing imperial hubris on steroids, is determined to punish countries abiding by an internationally approved agreement.”

The sanctions are already taking a tragic toll on the innocent people of Iran, undermining both their health and their economic security. Surely, this must be seen as an example of collective punishment.

Anticopyright: Editorials and articles originated on TMS may be freely reprinted, disseminated, translated and used as background material, provided an acknowledgement and link to the source, TMS: Sanctions as Collective Punishment, is included. Thank you.

One Response to “Sanctions as Collective Punishment”