“The United States reiterates its decision to withdraw from the Paris Agreement.” 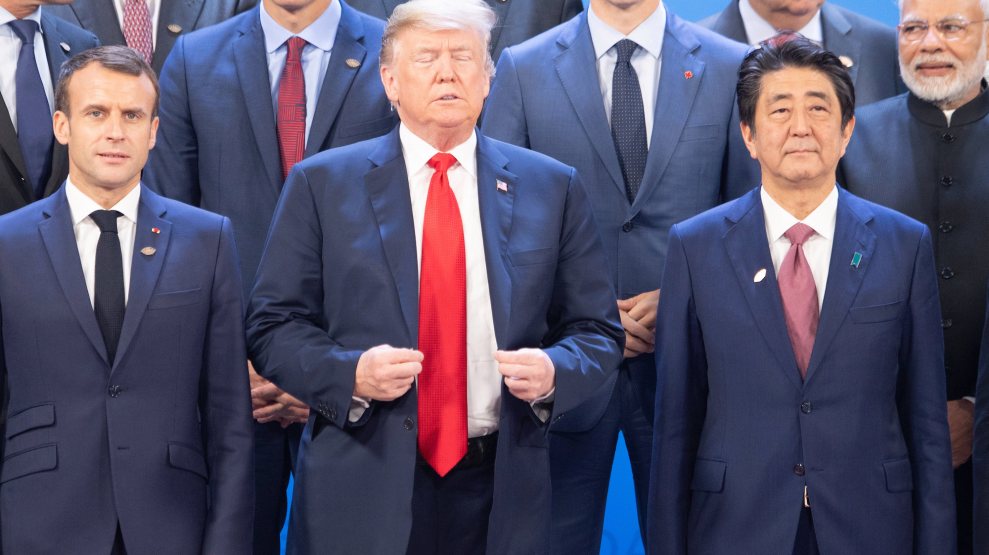 G20 leaders at the meeting in Argentina.
Ralf Hirschberger/DPA via ZUMA

1 Dec 2018 – It is telling that on two of the most contentious topics at the Buenos Aires Group of 20 meeting, the United States eventually joined 19 other world leaders on trade, but when it comes to climate change, President Donald Trump remained firmly alone in his belief that it is a hoax.

Two days of difficult negotiations at the G20 came to a close on Saturday [1 Dec] with a nonbinding six-page statement that attempts to defuse the brewing trade war between the United States and China, by committing, vaguely, to reforming the World Trade Organization. “We recognize the contribution that the multilateral trading system has made,” the statement read. “The system is currently falling short of its objectives and there is room for improvement. We therefore support the necessary reform of the WTO to improve its functioning. We will review progress at our next Summit.”

On climate, though, Trump was the only holdout. While the communiqué affirms support for the Paris climate change agreement on the eve of the next round of climate talks in Poland, it includes a separate section for the US: “The United States reiterates its decision to withdraw from the Paris Agreement, and affirms its strong commitment to economic growth and energy access and security, utilizing all energy sources and technologies, while protecting the environment.”

Trump, of course, pledged in June 2016 to withdraw from the Paris climate accord, and the United States will officially stand alone in the world in rejecting climate action when Trump can fulfill that promise formally in 2020. In the meantime, the country remains a part of the UN climate negotiations, though now more often playing the spoiler role in talks.

The rest of the text, agreed upon by the 19 countries, recognizes “that the Paris Agreement is irreversible and commit to its full implementation, reflecting common but differentiated responsibilities and respective capabilities, in light of different national circumstances. We will continue to tackle climate change, while promoting sustainable development and economic growth.”

In an email to reporters, the White House took credit for shaping the language that mentions recognizing “all energy sources and technologies in the energy mix” and promoting “energy security”—a favorite line of Trump’s to justify subsidizing coal in order to compete with renewables.

“There really wasn’t any disputing that the US was going to recognize its position,” an anonymous senior White House official told USA Today. “But what was interesting is that this was one of the last issues to close because the countries who typically might agree couldn’t agree with each other. What you’re starting to see is you’re seeing a little bit of the coalition fraying.”

It’s never been a mystery where Trump stands. He’s long thought of warming as a “hoax,” but recently he’s been asked more by journalists about his views in the face of alarming reports by both the United Nations and his own administration that the world is risking the worst-case scenarios by not changing course fast enough on greenhouse pollution.

Trump’s reason for rejecting the overwhelming evidence for climate change has been to cite his “natural instinct” for science. In a Washington Post interview this week, he said, “One of the problems that a lot of people like myself, we have very high levels of intelligence but we’re not necessarily such believers.”

Every Insane Thing Donald Trump Has Said About Global Warming

Rebecca Leber is a reporter in Mother Jones’ DC bureau, where she covers environmental politics and policy. She’s covered climate and energy for The New Republic, Grist, and ThinkProgress, and her writing has been published by more than a dozen outlets. Reach her at rleber@motherjones.com