25 Dec 2018 – Greetings! I am so sorry for not having been in touch with you ever since we met in various anti-nuclear conferences and consultations between 2001 and 2011. This is mainly because we had been protesting against the Koodankulam Nuclear Power Project (KKNPP), a Russian nuclear facility at Koodankulam, near the southernmost tip of India. It is the largest nuclear power park in India with six 1,000 MW units supplied by the Russians.

In 2009 some of my friends and I managed to bring all different anti-Uranium mining, anti-reactor and anti-bomb groups from all over India for a three-day consultation and we founded the National Alliance of Anti-nuclear Movements (NAAM). The NAAM has been holding periodic meetings ever since and the latest one took place in Bhopal in October 2018.

Right after the Fukushima accident in March 2011, people in the southern tip of India came together to oppose the KKNPP and I had the privilege of leading the struggle committee. We were holed up in a coastal village, Idinthakarai, for two and a half years with tens of thousands of fisherfolks, farmers, women and youth. Our struggle was described as the longest and largest non-violent struggle after India’s national fight for independence.

The Indian State that has been signing indiscriminate nuclear agreements with Russia, US, Japan, France, Australia, South Korea, Kazakhstan, Namibia etc. does not take our genuine and valiant struggle lightly. They call us anti-national, seditious, radical leftists, secessionists, foreign-stooges, foreign-funded etc. They have foisted roughly 380 cases on us including 20 sedition cases and 20 ‘waging war on the State’ cases that carry death penalty as possible punishment if convicted.

The central government sent a team from Delhi to raid my home, checked my financial transactions repeatedly, and froze all my bank accounts along with my wife’s and the account of a Trust that manages our little school. Our school was also attacked twice with the connivance of the local police. The authorities have also impounded my passport and issued a ‘look out’ notice to all the ports and airports in the country. So I am unable to go abroad to teach or research and am hopelessly broke.

Ever since I left Idinthakarai village, I contested in the 2014 Parliament election as an Aam Aadmi Party (AAP) candidate and in the 2016 state assembly election as an independent candidate. I lost both of them rather badly due to lack of money, men, material and electoral experience. But we did make use of the election hustings to spread our anti-nuclear messages.

In 2016 some of my friends and I founded a Green Party (Pachai Tamizhagam Katchi) and carrying out political activities in Tamil Nadu. Although the provincial police, and the provincial and the central intelligence agencies have managed to undermine our protests, we have been keeping up the struggle through educating political and civil society leaders, campaigning on the streets, participating in TV debates, convening press conferences, writing articles and letters in newspapers, carrying out train tour campaigns and so on.

The Government of India along with its Department of Atomic Energy (DAE) and the Nuclear Power Corporation of India Ltd. (NPCIL) has been persisting with these faulty reactors by hiding all the hardships because any acknowledgement of difficulty or trouble would derail their entire nuclear dream. The various nuclear projects in the pipeline would be opposed vigorously and the bomb project would be challenged seriously. The large-scale corruption in the nuclear department, use of sub-standard parts and all other issues would be exposed. Consequently, our repeated demand for a White Paper on the KKNPP has been completely ignored by the Indian State.

In fact, units 3 & 4 and 5 & 6 are being added on a war-footing. The Indian government is also planning several mega nuclear power parks along the 7,500-km long coastline and in many interior locations also. To supply sufficient Uranium for all these indigenous and imported reactors, the government is setting up several mining projects also.

Right now, nuclear power contributes hardly 3 percent to the electricity pool in India with 22 units in 7 locations. This is not likely to go up anytime in the near future. Besides squandering our scarce national resources on highly expensive nuclear reactors imported from Russia, France and the United States etc., the Indian government seems to be keen on propping up foreign countries’ economies rather than working for our own people. The government spends exorbitant amounts on imported reactors, dilutes our own liability act, reveals hardly any details to the public, and compromises on the safety and security of our own citizens.

The United States and other countries have helped India join the Nuclear Suppliers Group (NSG), and sign nuclear safeguards agreement with the International Atomic Energy Agency (IAEA) etc. for their own (nuclear) business gains. As a result of all these, the Non-Proliferation Treaty (NPT) and other international nuclear treaties stand compromised and even threatened. It is ludicrous to hold that some countries such as Iran and North Korea should not develop nuclear power but others like India and Pakistan could. Now Brazil, Bangladesh, Egypt, the UAE and many other countries are beginning to set up nuclear power plants and if the trend continues like this, fissile material may become readily available in the open market. Nuclear terrorism is fast becoming a stark reality.

Nuclear bomb continues to be a credible threat to the survival of our planet and the well-being of all the peoples and other beings. But there is hardly any debate or discussion in international forums or summit meetings of world leaders. Even in the recent biannual conference of the International Peace Research Association (IPRA), there was hardly any mention of the word ‘nuclear’ except in my talk. Many researchers and scholars could not get Indian visa to attend that meeting. Similarly, the No Nukes Asia Forum (NNAF) members had difficulty in getting the Filipino visa for a meeting of the group in that country. Right-wing groups and governments around the world abhor any discussion on the nuclear issue. The American president Donald Trump has recently cancelled the landmark Intermediate-range Nuclear Forces (INF) Treaty in order to be able to counter the Chinese arms build-up in the Pacific.

To put it tersely, nuclear things are getting out of hand. And we need to reinvigorate all the various national, regional and international anti-nuclear groups and movements here and now. We all need to discuss the nuclear issues more earnestly and devise clear strategies to create a nuclear-free world. One immediate step could be putting pressure on the national governments and the United Nations to hold the recently-postponed ‘High-Level Conference on Nuclear Disarmament’ without any further delay.

Looking forward to hearing more from you on these issues, I send you my best personal regards and all peaceful wishes. Happy Holidays! 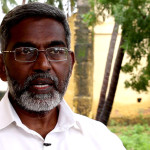 Anticopyright: Editorials and articles originated on TMS may be freely reprinted, disseminated, translated and used as background material, provided an acknowledgement and link to the source, TMS: Anti-nuclear Message from India, is included. Thank you.