In the Shadow of the Bomb: Poems of Survival 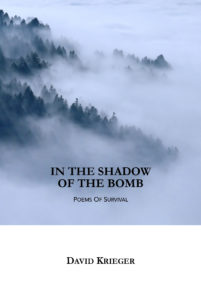 In the Shadow of the Bomb: Poems of Survival, by David Krieger. A Nuclear Age Peace Foundation Book, 2018, pp. 107

This is the third book of poetry by David Krieger I am reviewing. The first, Wake Up, was a warning call; the second, Portraits: Peacemakers, Warmongers and People Between, etched the personalities of doers and their deeds; and in the latest, In the Shadow of the Bomb, Krieger confronts us with the naked reality of The Bomb. The questions he raises are: What is the value of poetry in the face of weapons of mass annihilation? Can poems awaken us to the dangers of the Nuclear Age?

In fact, with each poetry collection, Krieger has been bringing us closer to the question of nuclear war and our survival. American President Trump, in fact, now pronounces America’s preparedness for an armed Space force. Krieger’s latest collection is about our hubris when a missile loaded with nuclear weapons is pointed at the collective head of humanity. Can we avert our eyes and pretend not to see? In the poem, ‘In Our Hubris’, Krieger asks: Have we given up on our common future? He wants the reader to react, resist, and awaken before it’s too late. Krieger’s work is unabashedly polemical, a nonkilling manifesto about the future, conscious of the contemporary history of the Western world.

His poem ‘When the Bomb Became Our God’ tells us how close we have come to meeting the fate we have been shaping for ourselves:

In another poem, ‘People of the Bomb’, he observes:

“The bomb may have ended the war,
but only if history is read
like a distant star. If only the sky
had not turned white and aged.
If only time had not bolted to change course,
If only the white flags had flown before
the strange storm.”

In the section entitled, “What Shall We Call the Bomb Dropped on Hiroshima?” the poet asks:

“Shall we call it
The Beginning of the End or
The End of the Beginning?”

Of those two dreadful August mornings when the Atomic Bombs were dropped on Hiroshima and Nagasaki, he recalls the words of General Dwight D. Eisenhower, “It wasn’t necessary to hit them with those awful things.” In that August 1945 history lesson, his insight doesn’t miss the evident racism of that dastardly act. On August 6th and August 9th, the two atomic bombs were dropped on civilians at Hiroshima and Nagasaki respectively. Ironically, between the dropping of those two atomic bombs, the U.S. signed the Charter of the Nuremberg Tribunal, agreeing to hold Nazi leaders accountable for crimes against  peace, war crimes, and crimes against humanity.

‘Where did the victims (of nuclear attacks) go?’ The poet demands, and then answers:

“Where else would the victims go but first
into the air, then into the water, then into the grasses,
and eventually into our food?
What does this mean?
It means that we breathe our victims,
that we drink them and eat them, without tasting
the bitterness, in our daily meals.

In another poem, entitled, ‘Among the Ashes’, amidst the charred bodies in Hiroshima, a daughter recognizes the gold tooth of her mother:

“As the girl reached out
to touch the burnt body,
her mother crumbled to ashes
Her mother, vivid
in the girl’s memory, sifted
through her fingers, floated away.”

The poet’s hurt challenges our humanity: “How dared we do all that?”

“We are mighty. We take what we want
when we want, believing there is no accounting.”

In 1948, George Orwell wrote: “If you want a picture of the future, imagine a boot stamping on a human face – forever.” In his poem, ‘Warning to Americans’, Krieger writes:

“Don’t look into the mirror, You may be frightened
by the raw redness of your jingoism. You may find
a flag tattooed on your forehead or on your chest.

Don’t mourn the loss of your freedoms. Remember,
Orwell warned this would come.
Your freedoms were not meant to last forever.

David Krieger, a founder and president of the Nuclear Age Peace Foundation, is so familiar with the history of his country, government and people that with poems about warring America, in the section, ‘Reflections of a Tragic History’, his poetry describes with a sense of irony how atomic weapons obliterated cities for the wrong reasons, carpet bombing and massacre of civilians done in the name of freedom and demonstrating technology might, sacrifice of children and slaughter of  peasants for presidential lies. Searching for a silver lining, the poet concludes: “Is there no possibility that our hearts, like sad continents, / may reattach themselves to life?” Krieger coaxes his reader to, “Think, and Think Again” about the implications of looking at fellow humans as hajjis, gooks, savages…, they are humans not ‘the other’.

In ‘Rules of Engagement’, the poet points to how wars have continued to dehumanize American soldiers, reminding us of an incident in the Afghan war when three Afghans lay dead on their backs in the dirt, and the four young U.S. Marines in battle gear took to celebrate their victory urinating on them.  That act, Krieger notes, was like holding up a mirror proclaiming – “this is who we are.”

“When we teach our children to kill, we turn them
Into something we don’t understand: ourselves.
Their lack of humanity is not different from ours.
We have not taught these young men to value life.
They teach us how little we do.
Why should they hold back when we have
taught them and sent them to kill other men —
men whose names they will never know?
If we are shocked by their disrespect for the dead,
we should consider our own for the living.”

In the section, ‘Oh War’, Krieger provides a narrative on archeology of war given by politicians, generals, and businessmen starting with distant beating of the drums exhorting the need for sacrifice from ‘Soldiers Fall’ to the deaths of ‘Children of War’, to singing of ‘War Crime Blues’:

“Have you heard the terrible news?
U.S. forces bombed a hospital in Kunduz.
It gives me a case of the wartime blues,
makes me shake with the war crime blues.
You can’t win a war, you can only lose.”

In another poem, the poet continues:

Soldiers fall
like white flowers
on a winter field.
They sink
in burning snow.”

The final part of the collection has about a dozen poems of hope and inspiration, challenging the reader to stand up and be counted — giving us reasons to end war. These are deeply moving poems of positivity. Some snippets:

(“I have a higher duty to my conscience”. –Pablo Paredes)

“Like the three tenors, like three pillars,
there are three Pablos for peace:
Picasso, Neruda and Paredes.

The first painted Guernica, the second
wrote poems as an act of peace.
The third refused to fight in Iraq.

Pable Picasso painted the horrors of war.
Pablo Neruda wrote poems of love and decency.
Pablo Peredes refused to kill or be killed.”

“I refuse to be used as a tool
of war, to kill on order,
to give my life for a lie.
I refuse to be indoctrinated
or subordinated, to allow the military
to define all I can be.”

David Krieger believes we have to elevate our moral and spiritual level to take control of our most dangerous technologies and abolish them before they abolish us. A great story teller, his poetry of survival asks us to awaken our passion to end the nuclear era, trying to ignite in us a love for life, encouraging us to pass the world on intact to new generation(s). Celebrating the possibility of a living planet, in his poem, ‘A Conspiracy of Decency’, his optimism shines:

“We will conspire to find new ways to say people matter.
This conspiracy will be bold.
Everyone will dance at wholly inappropriate times.
They will burst out singing non-patriotic songs.
And the not-so-secret password will be Peace.”

Like the Nobel Poet Laureate Rabindranath Tagore, who wrote in 1913: “The small truth has words that are clear; the great truth has great silence”, Krieger believes that “Within the awful shattering chaos of war, lives a still and silent seed of peace.” The seed of our existence and essence.  —  A powerful collection of poems.

Anticopyright: Editorials and articles originated on TMS may be freely reprinted, disseminated, translated and used as background material, provided an acknowledgement and link to the source, TMS: In the Shadow of the Bomb: Poems of Survival, is included. Thank you.

2 Responses to “In the Shadow of the Bomb: Poems of Survival”