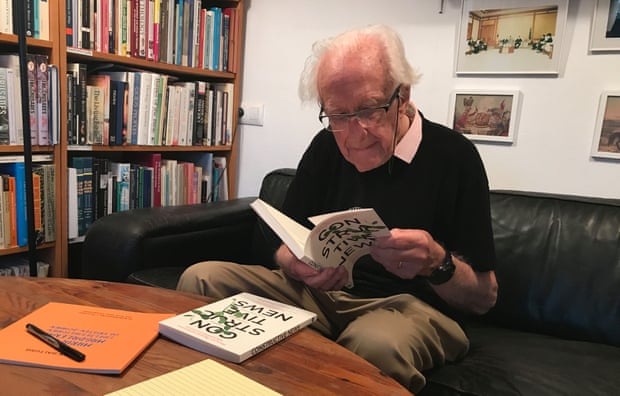 18 Jan 2019 – The academic who first defined the essence of news journalism has said the media have misconstrued his work and become far too negative, sensational and adversarial.

Johan Galtung, a Norwegian professor who wrote a key scientific paper more than 50 years ago that listed a series of factors including conflict and immediacy as the hallmarks of news reporting, said his work was intended as a warning, not a guide.

Galtung’s 1965 study listed criteria that appeared to underpin news reporting at the time, finding that while importance and newness were crucial, so were sensation and conflict. His work has since been seen as a gold standard for news journalism.

Good News at Last: The World Isn’t As Horrific As You Think

But in an interview, Galtung said his definitions were intended to show how news was getting it wrong. He stressed that his paper said that if news continued to reflect the world in this antagonistic way, it would generate extreme negativity, and “a growing tension between the centre and the periphery both nationally and globally”.

“It’s a complete misunderstanding,” he said from his home in southern Spain. “Our work from the early 1960s was meant to be a warning of the consequences for the way news media filtered the world. But the western news industry believed I was describing how things should be done, instead of what is being done.

“I was saying, ‘what you do is incomplete. You are missing a major part of the image of the world,’” said Galtung, who will address the annual Constructive Journalism Conference in Geneva on 18 January.

But, he said, editors and journalists, particularly in the US, interpreted the work as “the standard on which generation after generation ever after has filtered the world to the public through the news”.

The overwhelming negativity of news in recent years has prompted a debate about its impact on the public psyche. Recent academic studies have found that pessimistic news makes audiences feel helpless and less likely to engage in solving global problems.

A 2017 study on declining global audiences for traditional news sources was conducted by Reuters Institute for the Study of Journalism at Oxford University. The study showed that 48% of people leaving news media did it because news had a negative effect on their mood; 37% said they stopped consuming news because they did not trust the content; and 27% said they stopped following the news because “there is nothing I can do about it anyway”.

The Edelman Trust Barometer published global research in late 2017 showing that on average 53% of people worldwide felt the system they lived in was failing. Respondents expressed a “sense of injustice”, “lack of hope”, “lack of confidence” and “desire for change”. In countries like France, Germany, Italy, US, Spain, the UK and the Netherlands, between 56% and 72% of the population described a meltdown of their trust in democratic society.

“News media are now so full of stories on misery,” said Hans Henrik Knoop, an assistant professor at Denmark’s Institute of Psychology. “Negativity controls news flow, and therefore also politics and public debate. Apathy or fear is the result. The risk is that people not only deselect media as sources for news, but also that they disengage in the public debate.”

Galtung predicted as much in 1965. The article “The structure of foreign news” was published in March of that year in the Journal of Peace Research by Galtung and colleague Mari Holmboe Ruge. The pair examined the coverage of international conflicts in four Norwegian newspapers and listed 12 criteria, which seemed to be present in order for an event to be considered newsworthy. One of the most dominant was “reference to something negative”.

To this day Wikipedia cites the article from Galtung and Ruge as the basis for how the news is constructed.

As Reuters Institute for the Study of Journalism at Oxford University stated in 2013: “The most cited work on news value has been that of Galtung and Ruge … Most of the research since the 1960s … has used Galtung and Ruge as the starting point.” The academics’ findings are taught in school and journalism colleges across the world.

The academic paper concluded with a warning on the consequences for society if news organisations continued to promote confrontation, tension and sensation over collaboration, resolution and compassion.

“The consequence of all this is an image of the world that gives little autonomy to the periphery but sees it as mainly existing for the sake of the centre,” the paper said. “Conflict will be emphasised, conciliation not.”

“And this is exactly what has happened,” Galtung said. “News media give a total biased picture of reality. The perception of reality in the public becomes overly negative.”

For years, the founder of peace and conflict studies and head of the Peace Research Institute at the University of Oslo has been reluctant to speak to journalists, as he feels misrepresented by the news industry.

He is unequivocal on the consequences of the news media’s misreading of his research. “It is enormous. Absolutely enormous,” he said.

“It shapes what people are doing. And it shapes politicians, it makes them negative, instead of putting emphasis on the good in society they want to construct. They become unnecessarily competitive instead of being cooperative.”

Ulrik Haagerup is former executive director of news at Danish Public Broadcasting and founder and CEO of Constructive Institute located at Aarhus University in Denmark. He spoke to Galtung on the sidelines of the annual Constructive Journalism Conference in Geneva

One Response to “Academic Who Defined News Principles, Galtung Says Journalists Are Too Negative”