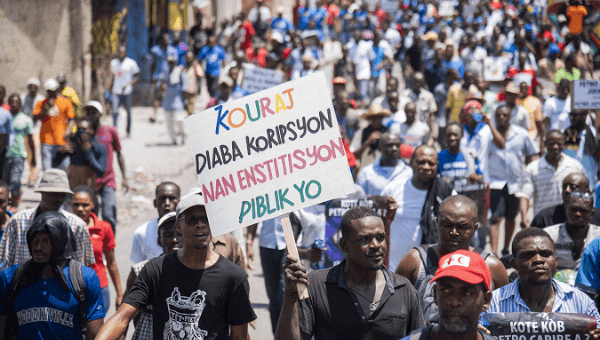 1 Jan 2019 – Haiti, the first Latin American country to declare independence and the first Black republic, celebrates 215 years since it forced France to surrender its colonial claim over what the slave-driven plantation formerly known as Saint-Domingue.

After the French Revolution (1789 – 1799), over half a million enslaved Black men demanded the abolition of slavery in the former colony. France refused, leading to an armed uprising against the “masters.” Between 3,000 and 5,000 white men and women were killed during the uprising.

On Jan. 1, 1804, the French colony of Saint-Domingue became the Republic of Haiti, after over a decade of fighting against French enslavement and colonization. It was the most successful slave rebellion in the Americas and the only revolt of its kind that led to the creation of a state.

In a message to Haiti’s President Joevenel Moise, LaRoque stressed that it is time to “remember the historic time of the Haitian Revolution and its significance of triumph over adversity in the conquest of liberty, equality, and its national destiny.”

An important memory today, when Haiti is facing an ongoing political and economic crisis, which mostly lately led to nationwide protests and strikes against corruption and dire living conditions for the many; over half of its 10 million inhabitants survive with less than US$2 a day.

Haiti’s problems have a long history.

Since its birth as a Republic, Haiti was burdened with an illegitimate debt. In exchange for lifting a naval and diplomatic blockade, France demanded that Haiti pay 150 million of gold francs in “reparations” to former French slaveholders. According to several estimates, that was 10 times the country’s yearly revenue.

Twelve French warships with 500 cannons were stationed along the coast of Haiti, threatening to re-invade and re-enslave the Haitian people. For over a century, Haiti was required to finance the debt, hampering the possibility to invest in infrastructure, social services, and industrial development.

It wasn’t until 1947 that Haiti was finally capable of paying compensation to slaveholders and human traffickers. By then, it had already suffered a 19-year-long occupation by the United States (1915 – 1934), during which racial inequalities were exacerbated.

In 2004, Haiti officially demanded France to pay back the money, stressing that it was a “grave injustice” that prevented Haiti from developing as fast as other countries.

France has so far rejected any possibility for paying back the illegitimate debt it claimed from Haiti.