20 Jan 2019 – In April 2014 I was part of an international delegation which visited Syria for five days. The delegates came from many different countries. Among the notables were the Irish Nobel Laureate Mairead Maguire, a Syrian-British heart surgeon and Julian Assange’s father. We spent time in Damascus, then traveled by bus to Latakia and then Homs. In each city we had meetings with political, religious and social leaders but also had time to wander about and talk with people on the streets.

In Latakia, I met Lilly Martin, an American woman who married a Syrian and has lived there, raising a family for the past twenty-five years. She told me how wrong the western media coverage was. Contrary to media claims, she said protests in Latakia were violent from the start. After the first outbreak of violence, Syrian police and military were ordered to not carry weapons. Protesters continued to burn and destroy government offices with incidents of knifing and shooting unarmed police.

When we visited Homs I was struck by how normal it looked. The streets were full of people and the city looked fine. It was dramatically different than the images portrayed in western media. It was only when we were driving out of Homs that we passed an area where there was widespread destruction and battle damage. There was a sharp contrast between most of the city and the few neighborhoods where battle had raged.

The American journalist Marie Colvin died in February 2012 in one of those neighborhoods. It was called Baba Amr. Ten days after her death, the militants and remaining civilians had all departed Baba Amr. It’s unfortunate that Marie Colvin did not talk with Lilly Martin or visit the majority of Homs where the war was not raging. It could have provided much needed balance to her perspective. 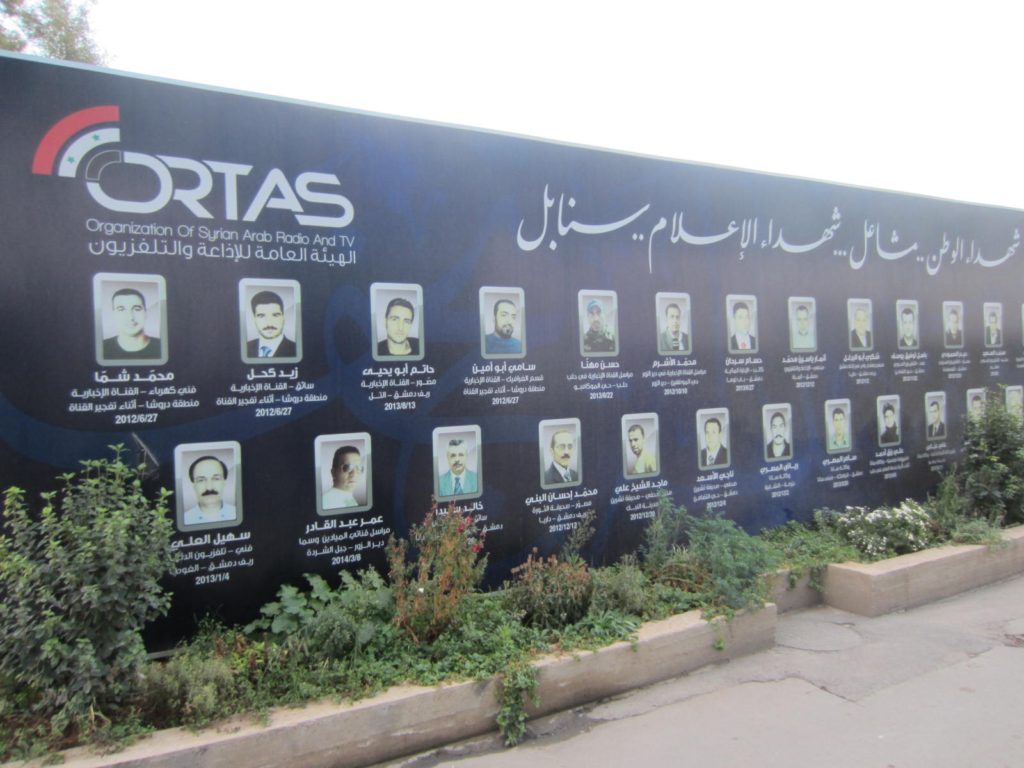 According to many of her colleagues, Marie Colvin was charming and courageous, ambitious and fun to be with. She had a knack for including personal details, descriptions and emotions that engaged the reader. Unfortunately, Colvin’s reports and interviews from Syria were inaccurate and a huge distortion of the situation.

It is useful to examine Colvin’s reporting now, seven years later, because there is a wave of new articles, books and movies about her and how she died in Syria.

Colvin and photographer Paul Conroy were smuggled into Syria from Lebanon in February 2012. They spent some days in the town of Al Buwaydah and then were taken into the city of Homs using a drainage culvert to avoid Syrian Army checkpoints. Their guides and minders for the trip were from the Farouq Battalion associated with the Free Syrian Army (FSA).

Beginning in the Fall 2011, militants from the Farouq Battalion set up checkpoints, killed security and soldiers and gradually took control of the Homs neighborhood called Baba Amr. They called it a “liberated zone”. By the time Marie Colvin and other journalists arrived, most of the civilians had fled the fighting to stay with friends and family in other parts of the city.

Colvin and Conroy spent a few days in Baba Amr but then left through the tunnel when it was rumored that Syrian forces were going to attack. After learning that the attack did not take place, the journalists made the difficult journey back into Baba Amr. The second morning after returning, Marie Colvin and French photographer Remi Olchik died as the Syrian forces launched mortar and missile attacks. 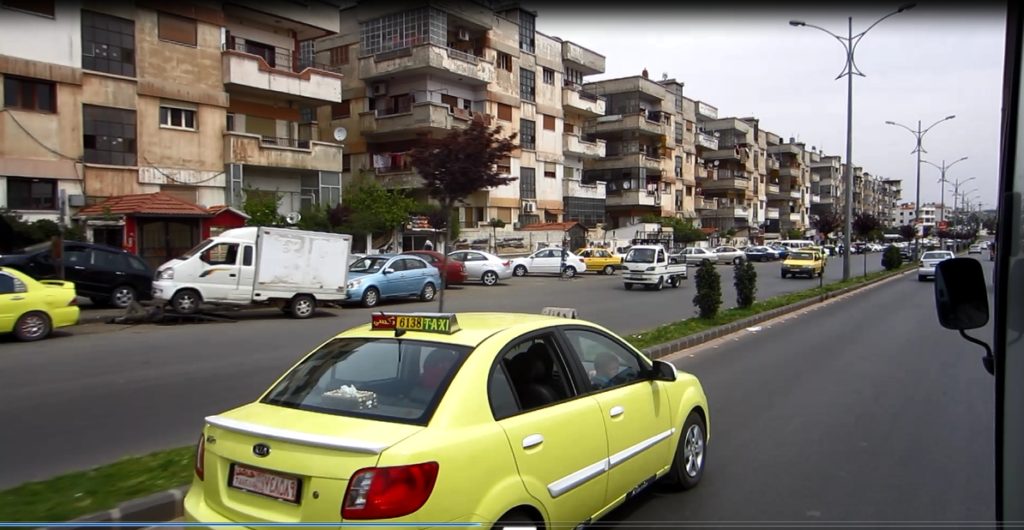 Biased and Inaccurate Reporting from Syria

Marie Colvin’s reports and interviews from Syria were broadcast widely in the UK and USA. She wrote an article titled “A vet is only hope for Syrian wounded”.  The article begins “Wounded civilians arriving at a makeshift clinic in the Syrian city of Homs are relying on a vet to save their lives because there is no doctor to treat them.” As documented in Conroy’s book, they were not in Homs; they were in the town Buwaydah when they observed a vet working as a medic. Actually, there were hundreds of doctors performing medical duties and treating civilians and soldiers injured in the conflict in Homs.

Colvin continued her report saying, “The widows’ basement reflects the ordeal of 28,000 men, women and children clinging to existence in Baba Amr.” This is a huge falsehood; there was a tiny fraction of that number of civilians remaining in the neighborhood. Paul Conroy wrote as follows: “It became increasingly unbelievable that there were an estimated 28,000 people still living in Baba Amr. I hadn’t seen a single one.” (page 188, “Under the Wire”)

The night before her death, Marie Colvin did live interviews on BBC, Channel 4 and CNN. The CNN interview began by showing video of a baby dying from a shrapnel wound. CNN believed Marie Colvin was an eye-witness to the baby’s death. Anderson Cooper asked Colvin what it was like to be in the room. Marie Colvin replied that the room was chaotic and the baby’s death heartbreaking. She dramatized the situation by speaking about the baby’s grandmother being a volunteer in the room when the baby arrived. However, Colvin was not in the room at all. Marie Colvin and the media activists were shown the video on a laptop computer by their FSA guide. (page 155, “Under the Wire”).

In her CNN interview Colvin described Baba Amr as “28,000 civilians, men, women and children, hiding, being shelled, defenseless…. There are no military targets here…. So it’s a complete and utter lie that they (Syrian military) are only going after terrorists…. The Syrian Army is simply shelling a city of cold, starving civilians.” In reality, Baba Amr was the primary base for militants of the Farouq Battalion. If there was an “utter lie”, it was pretending that this was primarily a civilian neighborhood. 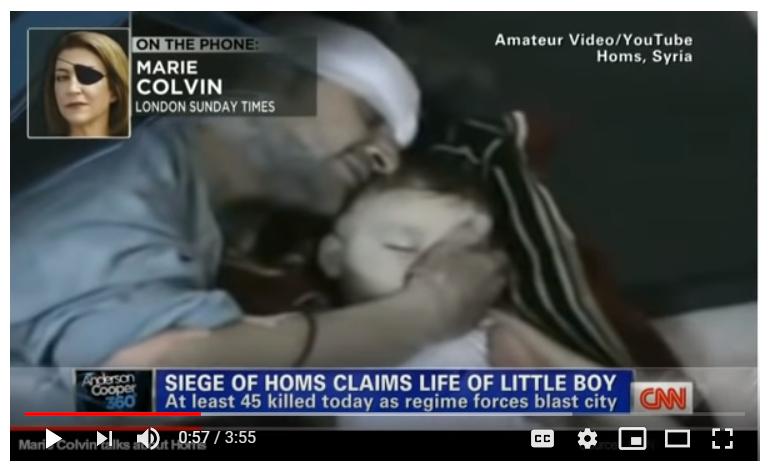 The Syrian Reality Which Colvin Did Not Report

Like most western coverage of Syria, Colvin’s reporting did not provide important context such as the following:

In mid January, an Arab League report documented the results of their investigation. They said,

“The Observer Mission witnessed acts of violence being committed against Government forces and civilians that resulted in several deaths and injuries. Examples of these acts include the bombing of a civilian bus, killing eight persons and injuring others, including women and children, and the bombing of a train carrying diesel oil. In another incident in Homs, a police bus was blown up, killing two police officers. A fuel pipeline and some small bridges were also bombed.”

Militants in Baba Amr destroyed government tanks and used their own tank to attack government forces.

On 2 February 2012, FSA militants attacked a government checkpoint, killing ten soldiers and taking another 19 as prisoners. That was evidently the last straw for the government. The next day, February 3, the intense bombardment of Baba Amr began. 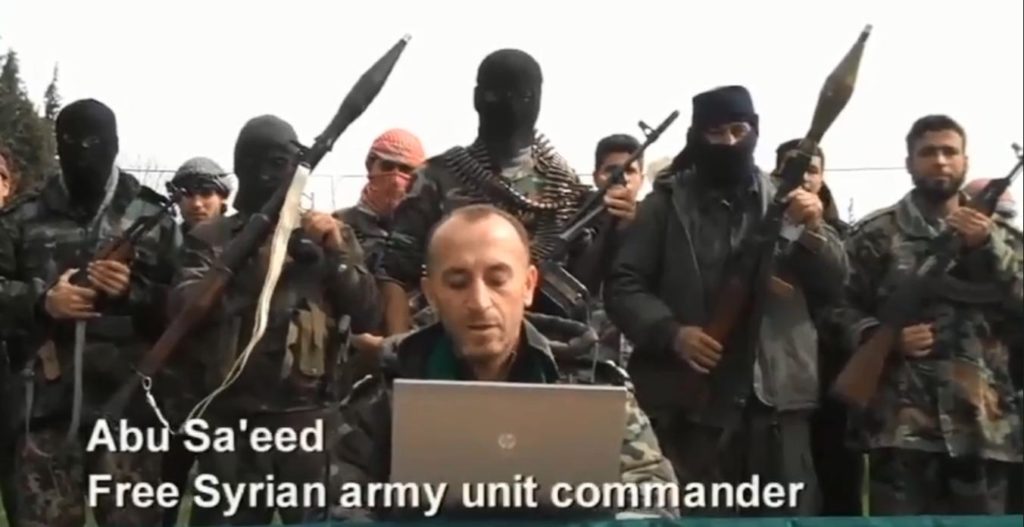 Marie Colvin’s reports from Baba Amr had a political goal of spurring Western intervention. This is made clear in emails to her Sunday Times editor. “It is sickening that the Syrian regime is allowed to keep doing this …. I think again to focus on Baba Amr, 28,000 defenceless under shelling….” (pp 196-197, “Under the Wire”).

In her interview with CNN, Colvin used the video of the dying little baby to urge western intervention. “That baby probably will move more people to think, ‘What is going on, and why is no one stopping this murder in Homs that is happening every day?”

In her final article for the Sunday Times Colvin says, “In Baba Amr, the Free Syrian Army (FSA)…. have virtually unanimous support from civilians who see them as their defenders.” This claims is highly dubious. The vast majority of civilians had left Baba Amr. All that were left were family members of FSA militants and others who had nowhere to go.

The bias in Marie Colvin’s reports and interviews was not unique. On the contrary, nearly all NATO and Gulf state reporting on Syria has been biased. Stephen Kinzer would later write “The media are misleading the public on Syria.” Patrick Cockburn would later write that “Nearly everything you have read about Syria and Iraq could be wrong”. 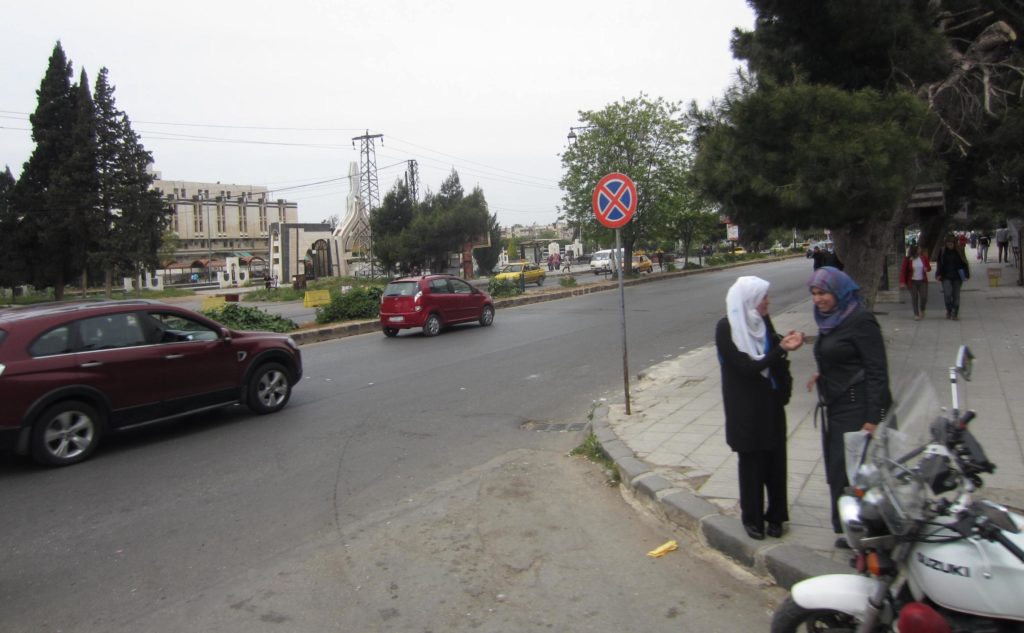 It is claimed that Marie Colvin was intentionally targeted by the Syrian government. This is unlikely. Her death brought opprobrium on Damascus and helped the militant opposition. A few months after Marie Colvin’s death, a prominent British journalist reported that the same Syrian rebels tried to get him and his team killed.

“I’m quite clear the rebels deliberately set us up to be shot by the Syrian Army. Dead journos are bad for Damascus.”

It is also claimed that Syrian intelligence determined the location of Marie Colvin by identifying a satellite phone signal used in her interviews. This is false. Colvin told to her editor at the Sunday Times that the Thuraya satellite phones did not work. For her skype interviews she used the same antenna uplink used night and day by media activists in Baba Amr.

Marie and Remi were working in a battle zone, guided and effectively embedded with armed insurgents. Their deaths were another tragic consequence of the war.

Ten days after Colvin’s death, the militants and remaining civilians withdrew from Baba Amr. There was no massacre, just a street parade and celebration in other parts of Homs.

The deaths of Marie Colvin and Remi Olchik sparked many tributes and widespread publicity. Largely unknown in the West, hundreds of Syrian journalists have also died in the conflict. In a sense, they are all victims of the proxy war on Syria. In another sense, the equivalence is not fair. The war has been encouraged by some and imposed on others.

Anticopyright: Editorials and articles originated on TMS may be freely reprinted, disseminated, translated and used as background material, provided an acknowledgement and link to the source, TMS: Marie Colvin, Homs and Media Falsehoods about Syria, is included. Thank you.