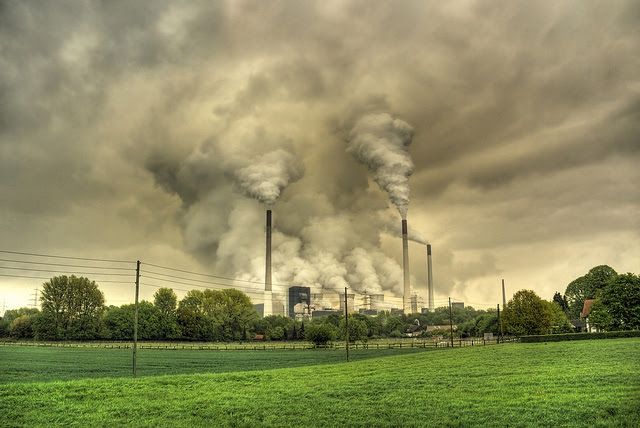 Here’s A Peek into Our Climate-Addled Future

3 Jan 2019 –The summer of 2018 was intense: deadly wildfires, persistent drought, killer floods and record-breaking heat. Although scientists exercise great care before linking individual weather events to climate change, the rise in global temperatures caused by human activities has been found to increase the severity, likelihood and duration of such conditions.

Globally, 2018 is on pace to be the fourth-hottest year on record. Only 2015, 2016 and 2017 were hotter. The Paris climate agreement aims to hold temperature rise below 1.5 to 2 degrees Celsius, but if humankind carries on its business-as-usual approach to climate change, there’s a 93 percent chance we’re barreling toward a world that is 4 degrees Celsius warmer by the end of the century, a potentially catastrophic level of warming.

A Warning and a Reckoning

In 1992, 1,700 scientists around the world issued a chilling “warning to humanity.” The infamous letter declared that humans were on a “collision course” with the natural world if they did not rein in their environmentally damaging activities.

Such apocalyptic thinking might be easy to mock, and not entirely helpful in inspiring political action if end times are nigh. In 2017, however, more than 15,000 scientists from 184 countries co-signed their names to an updated—and even bleaker—version of the 1992 manifesto.

The latest version, titled “World Scientists’ Warning to Humanity: A Second Notice,” asserts that most of the environmental challenges raised in the original letter—i.e., depletion of freshwater sources, overfishing, plummeting biodiversity, unsustainable human population growth—remain unsolved and are “getting far worse.”

“Especially troubling is the current trajectory of potentially catastrophic climate change due to rising [greenhouse gases] from burning fossil fuels, deforestation, and agricultural production—particularly from farming ruminants for meat consumption,” the paper states.

“Moreover,” the authors wrote, “We have unleashed a mass extinction event, the sixth in roughly 540 million years, wherein many current life forms could be annihilated or at least committed to extinction by the end of this century.”

But they stressed that, “Soon it will be too late to shift course away from our failing trajectory, and time is running out.”

More recently, President Trump’s own administration released on November 23 the 1,600-page Fourth National Climate Assessment, a quadrennial report compiled by 13 federal agencies. This report paints a particularly grim picture, including more frequent droughts, floods, wildfires and extreme weather, declining crop yields, the rise of disease-carrying insects and rising seas—all of which could reduce U.S. gross domestic product by a tenth by the end of the century.

So what we saw this summer? Unless humanity gets its act together, we can expect much worse to come. Here’s a peek into our climate-addled future.

The Amazon, one of the most biodiverse places on Earth, could lose about 70 percent of its plant and amphibian species and more than 60 percent of its birds, mammals and reptile species from unchecked climate change, according to a 2018 study by the University of East Anglia, the James Cook University and World Wildlife Fund (WWF), which analyzed the impact of climate change on nearly 80,000 species of plants, birds, mammals, reptiles and amphibians inhabiting the WWF’s 35 “Priority Places” for conservation.

The study’s most alarming projection was for the Miombo Woodlands in central and Southern Africa, one of the priority places most vulnerable to climate change. If global temperatures rose 4.5 degrees Celsius, the researchers projected the loss of 90 percent of amphibians and 80 percent or more of plants, birds, mammals and reptiles.

This incredible loss of biodiversity affects humans, too. “This is not simply about the disappearance of certain species from particular places, but about profound changes to ecosystems that provide vital services to hundreds of millions of people,” the authors warned.

Staple crops such as wheat, rice, maize and soybeans, which provide two-thirds of the world’s caloric intake, are sensitive to temperature and precipitation and to rising atmospheric concentrations of carbon dioxide. A sweeping 2017 study showed that every degree-Celsius of warming will reduce average global yields of wheat by 6 percent, rice by 3.2 percent, maize by 7.4 percent and soybeans by 3.1 percent.

What’s more, according to a recent paper, carbon dioxide levels expected by 2050 will make staple crops such as rice and wheat less nutritious. This could result in 175 million people becoming zinc deficient (which can cause a wide array of health impacts, including impaired growth and immune function and impotence) and 122 million people becoming protein deficient (which can cause edema, fat accumulation in liver cells, loss of muscle mass and in children, stunted growth). Additionally, the researchers found that more than 1 billion women and children could lose a large portion of their dietary iron intake, putting them at increased risk of anemia and other diseases.

Unless we cut heat-trapping greenhouse gases, scientists predict sea levels could rise up to three feet by 2100, according to the International Panel on Climate Change (IPCC) Fifth Assessment report.

This could bring high tides and surges from strong storms, and be devastating for the millions of people living in coastal areas. The National Oceanic and Atmospheric Administration (NOAA) published a reportearlier this year that predicted parts of Miami, New York City and San Francisco could flood every day by 2100, under a sea-level rise scenario of three feet.

Entire countries could also be swallowed by the sea due to global warming. Kiribati, a nation consisting of 33 atolls and reef islands in the South Pacific, is expected to be one of the first.

Kiribati won’t be alone. At least eight islands have already disappeared into the Pacific Ocean due to rising sea levels since 2016, and an April study said that most coral atolls will be uninhabitable by the mid-21st century.

The article’s scientific merit has been fiercely debated, but the World Bank did conclude in March 2018 that water scarcity, crop failure and rising sea levels could displace 143 million people by 2050. The report focused on Sub-Saharan Africa, South Asia and Latin America, which represent 55 percent of the developing world’s population. Unsurprisingly, the poorest and most climate-vulnerable areas will be hardest hit.

“Our attitude towards the environment has been so reckless that we are running out of good choices for the future,” Camilo Mora of the University of Hawaii at Manoa, the study’s lead author, told National Geographic.

“For heatwaves, our options are now between bad or terrible,” he added. “Many people around the world are already paying the ultimate price of heatwaves.”

But the Golden State’s fires will only get worse, according to California’s Fourth Climate Change Assessment released by the governor’s office in August. If greenhouse gases continue rising, large fires that burn more than 25,000 acres will increase by 50 percent by the end of the century, and the volume of acres that will be burned by wildfires in an average year will increase by 77 percent, the report said.

“Higher spring and summer temperatures and earlier spring snowmelt typically cause soils to be drier for longer, increasing the likelihood of drought and a longer wildfire season, particularly in the western United States,” The Union of Concerned Scientists explained in a blog post.

“These hot, dry conditions also increase the likelihood that wildfires will be more intense and long-burning once they are started by lightning strikes or human error.”

It’s not currently clear if changes in climate directly led to 2017’s major hurricanes, including Harvey, Irma, Maria and Ophelia. What we do know is this: Moist air over warm ocean water is hurricane fuel.

“Everything in the atmosphere now is impacted by the fact that it’s warmer than it’s ever been,” CNN Senior Meteorologist Brandon Miller said. “There’s more water vapor in the atmosphere. The ocean is warmer. And all of that really only pushes the impact in one direction, and that is worse: higher surge in storms, higher rainfall in storms.”

NOAA concluded this June that, “It is likely that greenhouse warming will cause hurricanes in the coming century to be more intense globally and have higher rainfall rates than present-day hurricanes.”

The Arctic is warming at a rate twice as fast as the rest of the planet, and continued loss of ice and snow cover “will cause big changes to ocean currents, to circulation of the atmosphere, to fisheries and especially to the air temperature, which will warm up because there isn’t any ice cooling the surface anymore,” Peter Wadhams, head of the Polar Ocean Physics Group at the University of Cambridge, told Public Radio International. “That will have an effect, for instance, on air currents over Greenland, which will increase the melt rate of the Greenland ice sheet.”

Not only that, frozen Arctic soil—or permafrost—is starting to melt, causing the release of methane, a far more potent greenhouse gas than carbon dioxide. It’s said that the permafrost holds 1.8 trillion tons of carbon, more than twice as much as is currently suspended in the Earth’s atmosphere. Wadhams explained that the fear is that the permafrost will melt in “one rapid go.” If that happens, “The amount of methane that comes out will be a huge pulse, and that would have a detectable climate change, maybe 0.6 of a degree. … So, it would be just a big jerk to the global climate.”

9. The Spread of Pathogens

Disturbingly, permafrost is full of pathogens, and its melting could unleash once-frozen bacteria and viruses, The Atlantic reported. In 2016, dozens of people were hospitalized and a 12-year-old boy died after an outbreak of anthrax in Siberia. More than 2,000 reindeer were also infected. Anthrax hadn’t been seen in the region for 75 years. The cause? Scientists suggested that a heat wave thawed a reindeer carcass that was infected with the disease decades ago, according to NPR.

While we shouldn’t get too frightened about Earth’s once-frozen pathogens wiping us out (yet), the warming planet has also widened the geographic ranges of ticks, mosquitoes and other organisms that carry disease.

“We now have dengue in southern parts of Texas,” George C. Stewart, McKee Professor of Microbial Pathogenesis and chair of the department of veterinary pathobiology at the University of Missouri, told Scientific American. “Malaria is seen at higher elevations and latitudes as temperatures climb. And the cholera agent, Vibrio cholerae, replicates better at higher temperatures.”

As the world’s largest carbon sink, our oceans bear the brunt of climate change. But the more carbon it absorbs (about 22 million tons a day), the more acidic the waters become. This could put a whole host of marine life at risk, including coral reef ecosystems, the thousands of species that depend on them and the estimated 1 billion people around the globe who rely on healthy reefs for sustenance and income. According to Science, “Researchers predict that with increasing levels of acidification, most coral reefs will be gradually dissolving away by the end of the century.”

These climate predictions are worst-case scenarios, but there are many more dangers to consider in our warming world. A report recently published in the journal Nature Climate Change found “evidence for 467 pathways by which human health, water, food, economy, infrastructure and security have been recently impacted by climate hazards such as warming, heatwaves, precipitation, drought, floods, fires, storms, sea-level rise and changes in natural land cover and ocean chemistry.”

Half a Degree Matters

Since the 19th century, the Earth has warmed by 1 degree Celsius. Now, a major IPCC special report released in October warns that even just a half-degree more of warming could be disastrous. “Every extra bit of warming matters, especially since warming of 1.5ºC or higher increases the risk associated with long-lasting or irreversible changes, such as the loss of some ecosystems,” said Hans-Otto Pörtner, co-chair of IPCC Working Group II.

The panel said that “limiting global warming to 1.5°C compared to 2°C could go hand in hand with ensuring a more sustainable and equitable society.”

With President Trump saying he doesn’t believe his own administration’s climate report, that sustainable and equitable society remains a distant dream.

Lorraine Chow is a freelance writer and reporter based in South Carolina.