Don’t Play Politics with Our Peace

Two years on we have a fundamental right to government; all our futures are in your hands. Please don’t play politics with our peace. 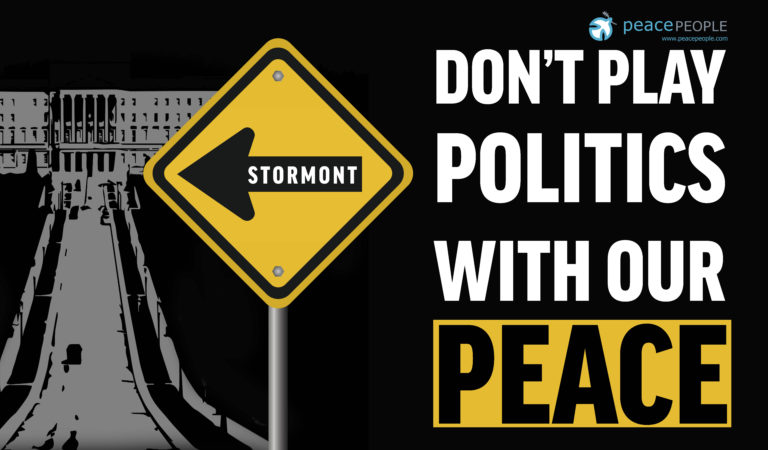 It is with deep concern and regret that I witness Northern Ireland has been without a Parliament for almost two years. It astonishes me that some of our political representatives, who know full well that their refusal to sit around the Executive Table and the Assembly in Stormont Parliament, means a political stalemate and a vacuum of power. Refusal to represent the people who have elected our politicians, directly affects many: There is a lack of spending in our infrastructure, education, health care and job creation. This leads to unemployment, homelessness, and insufficient wages. Instability in our governance deters past and future investors. Over the last 40 years, many large companies have left Northern Ireland, leaving a void only to be replaced with low-income employment. Is it any wonder that we have by far the lowest income in the United Kingdom? Many of our young people have been forced, not through choice but through necessity, to emigrate to find jobs and a future. Our biggest export from Northern Ireland is our biggest treasure- our young people. There is hardly a home in Northern Ireland from which a young family member has not left to seek a promising future and left a void and a sadness in their absence.

I therefore want to challenge everyone to look at their children, grandchildren, nieces and nephews and question: how big is their division? Gone are the days of fear and threat. So where does the problem lie? I believe the problem lies in the older generations who have suffered terribly on all sides through violence and fear. My generation has a responsibility to not restrain the youth by our bigotry and division. It is my hope that in the future we will have non-sectarian elections in a Parliament of left, right and center. Nevertheless, until that day occurs, I believe it is up to the older generation to ensure our elected government is representing us by insisting on the participation and cooperation of elected representatives. It is time to put aside egos, individual and collective, for the sake of the youth. If this scenario of dysfunctional politics continues, we are each challenged to ask the question: Are Sinn Fein or the Democratic Unionists (DUP) pursuing a divisionary politics in a quest for continued power? We can see this in the more centralized votes leaning away from moderate and towards hard-line parties over the last twenty years. At this point in our history faced as we are with important decision regarding Brexit and the question of a soft/ hard border, it is even more important that all our elected politicians be present at the table to speak on behalf of the people. It is also important that our political representatives work for a full implementation of the Good Friday Agreement and the healing and reconciliation of our society. Unfortunately, I believe, that if the two parties are not able to reconcile their differences then it is the responsibility of the British and Irish governments to hold talks with remaining parties willing to govern in Northern Ireland.

Anticopyright: Editorials and articles originated on TMS may be freely reprinted, disseminated, translated and used as background material, provided an acknowledgement and link to the source, TMS: Don’t Play Politics with Our Peace, is included. Thank you.