Stand with the People’s Uprising in Haiti

Statement in Solidarity with the Popular Uprising in Haiti

25 Feb 2019 – On November 15, 2018, in the midst of mass demonstrations taking place across the length and breadth of Haiti, Fanmi Lavalas Political Organization, the party of Haiti’s poor majority, issued a statement titled Crisis and Resolution. In the statement, Fanmi Lavalas denounced the regime of president Jovenel Moise and prime minister Jean-Henri Ceant as corrupt and dictatorial, and called for a transitional government for a period of three years to address the needs of the population and to set the stage for new elections for an inclusive and democratic government. The statement closes with the following:

“Fanmi Lavalas Political Organization continues to stand firmly with the Haitian people to “chavire chodyè a (overturn the cauldron)”. No cosmetic solution will bring an effective and lasting solution to the crisis in which we are plunged. This system has run its course. It cannot be patched up. It must be changed.”

In the months since the statement was released, Haiti’s population has been in the streets without let up, risking their lives each and every day as they attempt to oust the Moise-Ceant government. The Petro Caribe scandal, in which some $4.2 billion worth of funds made available through a Venezuelan government program and targeted for infrastructure and social services, was pocketed by Haitian government officials and their business cronies, has proven to be the tipping point — just like the rise in fuel prices last July that led to an earlier massive rebellion. 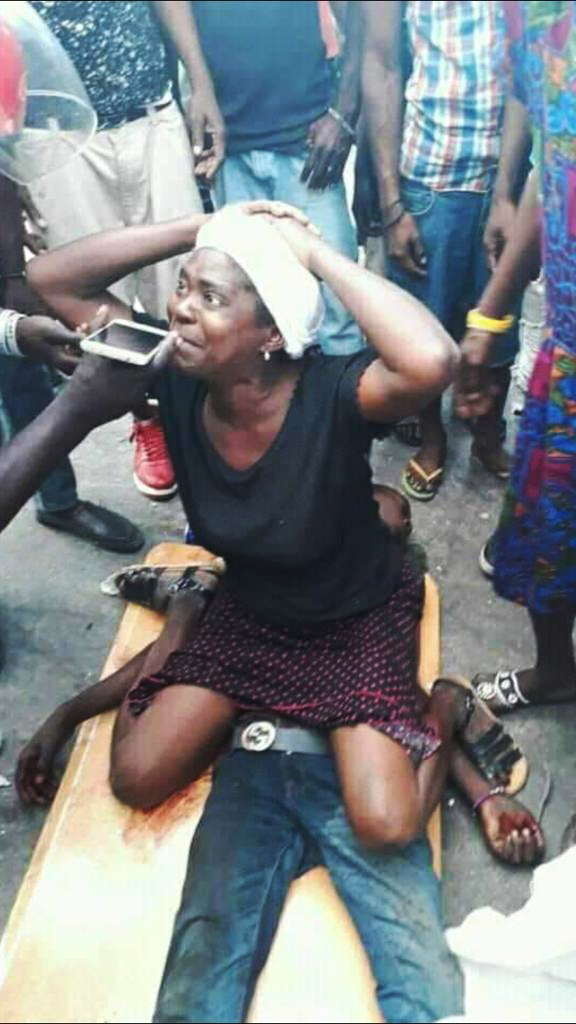 A mother protects the body of her son who was shot by Haitian police. She is making sure no one disappears his body as is the common practice of repressive forces in Haiti. They take the bodies away and all over Haiti people are searching for their loved ones.

But the roots of the crisis go much deeper than rising fuel prices or a corruption scandal. The current Haitian government has no legitimacy; it is a classic puppet regime, there to do the bidding of its international sponsors in the UN headquarters in New York, in Washington, Ontario and Paris. It is selling off the country’s mineral wealth, grabbing land from farmers, stealing money, and sacrificing Haiti’s sovereignty in its search for profits and power.  There can be no resolution without a fundamental change in governance and the social order. 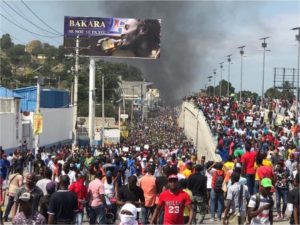 This February marks the 15th anniversary of the 2004 coup d’état that ousted the democratically elected government of President Jean-Bertrand Aristide. In these fifteen years, the Haitian popular movement has refused to be silenced, in spite of the kidnapping and forced exile of President Aristide and his wife and colleague, Mildred Trouillot Aristide, a subsequent UN military occupation, continuous and deadly repression against peaceful protestors, and a rigged electoral system. In 2015 and 2016, a series of stolen elections financed by the U.S. government–called an “electoral coup” by Fanmi Lavalas – resulted in the installation of Jovenel Moise, who is now desperately hanging on to power in the face of overwhelming opposition. While Fanmi Lavalas and other opposition parties produced detailed evidence of fraud and voter suppression, the U.S. State Department countered by calling the election “free and fair.” 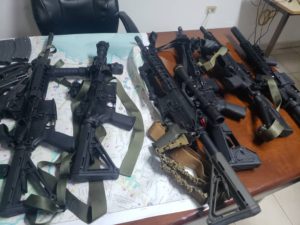 The Moise government has most recently shown how beholden it is to the Trump regime by voting with the U.S. to recognize Guaido’s self-proclaimed government in Venezuela. The same State Department that has attempted to convince Haitians that a stolen election = democracy is currently railing against Venezuela’s legitimate elected government and attempting to lay the groundwork for yet another coup in the Americas.  What hypocrisy.

The consequences of Haiti’s electoral coup in 2016 can be seen today in the dramatic footage of Haitians standing up to heavily armed police, carrying the bodies of their dead relatives, and turning their grief into more determined resistance. Denied free and fair elections, Haitians are now voting in the streets.

The uprising in Haiti is a powerful statement in favor of democracy and inclusion. This is what threatens the small elite that now rules Haiti.  And they are striking out in the most brutal ways. In one particularly grim episode in November 2018, heavily armed police and criminal gang members recruited by the police and given police uniforms, unleashed a horrific massacre in the community of Lasalin, a center of the Lavalas movement. Well over 70 people were killed as the police and their armed agents went door to door, slaughtering whole families, gang-raping women, burning homes, and terrorizing the community. As a final assault, they fed some of the dead bodies to pigs — a message sent to dramatize the utter disregard with which this current government views the Haitian people. 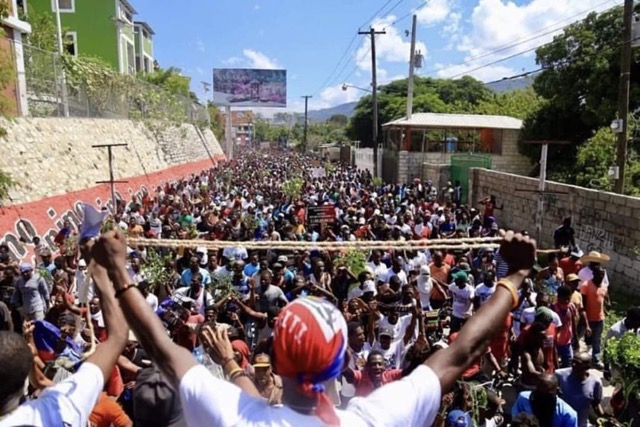 Just last week, it was revealed that 7 heavily armed U.S. mercenaries had been arrested in Haiti while, in their words, “working for the government.” What were they doing there? And why were they whisked out of the country so quickly with no consequence? What was their relationship to the Haitian government and to its repressive actions? Clearly, this is only the tip of the iceberg.
From mainstream news media, we have been subjected to the usual racialized commentary about Haiti – “mobs in the streets”, “police outgunned”, “looters”, “riots.” And from far too many progressives, there has been complete silence. What is acknowledged as revolutionary social movement in other areas of the world is somehow dismissed as chaos in Haiti.  Yet what we are seeing today in Haiti is the latest chapter in an unending struggle for democracy, dignity and justice.

In this time of rebellion, crisis and repression, we send our support to the people of Haiti, to the grassroots movement, and to the people’s party, Fanmi Lavalas.  It is a time for our voices to be heard, for the silence around Haiti to be broken, and for a dramatic increase in solidarity – something that should be on all of our agenda.

For more information, go to www.haitisolidarity.net

Anticopyright: Editorials and articles originated on TMS may be freely reprinted, disseminated, translated and used as background material, provided an acknowledgement and link to the source, TMS: Stand with the People’s Uprising in Haiti, is included. Thank you.