The Spiritual and Socialist Start of International Women’s Day

8 March is the International Day of Women and thus a time to highlight the specific role of women in local, national and world society. International Women’s Day was first proposed by Clara Zetlin (1857-1933) at the Second International Conference of Socialist Women in Copenhagen in 1911. Later, she served as a socialist-communist member of the German Parliament during the Wiemar Republic which existed from 1920 to 1933 when Hitler came to power. Zetlin went into exile in the Soviet Union shortly after Hitler came to power. She died there several months later in 1933. 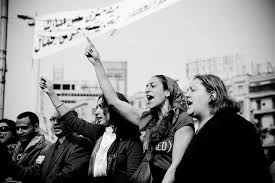 Zetkin had lived some years in Paris and was active in women’s movements there. The women were building on the 1889 International Congress for Feminine Works and Institutions held in Paris under the leadership of Ana de Walska.  De Walska was part of the circle of young Russian and Polish intellectuals in Paris around Gerard Encausse (1865-1916), a spiritual writer who wrote under the pen name of Papus and edited a journal L’Initiation.(1) Papus stressed the need for world peace. In 1901 Papus spent time in Russia as a spiritual advisor to Tsar Nicholas II. Papus had warded the Tsar against the growing influence of Rasputin

This turn-of-the-century spiritual milieu was influenced by Indian and Chinese thought. Translations of fundamental Asian philosophical texts were increasingly known in an educated public. ‘Feminine’ and ‘masculine’ were related to the Chinese terms of Yin and Yang − not opposed but in a harmonic balance.  Men and women alike have within themselves the Yin and Yang psychological characteristics. ‘Feminine’ characteristics or values include intuitive, nurturing, caring, sensitive and relational traits.  ‘Masculine’ traits are rational, assertive and analytical.

As individual persons, men and women alike can achieve a state of wholeness, of balance between the Yin and Yang.  However, in practice, ‘masculine’ refers to men and ‘feminine’ to women.  Thus, some feminists identify the male psyche as the prime cause of the subordination of women around the world.  Men are seen as having nearly a genetic coding that leads them to ‘seize’ power, to institutionalize that power through patriarchal societal structures and to buttress that power with masculine values and culture. 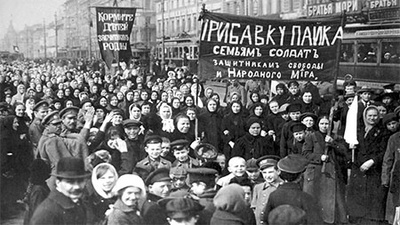 International Women’s Day in Petrograd (as St. Petersburg had been renamed in 1914).

Thus Clara Zetkin saw the need to call attention in a forceful way to the role that women as women play in society and the many blocks  which men place in their way.  She made her proposal in 1911 and  the idea of the Day was taken up within the Socialist movements.

The harmonious balance of Yin and Yang, present in the early discussions around Ana de Walska and Papus, largely dropped out of the Socialist version of International Women’s Day.  However, with greater attention being given to Chinese philosophical thought, we may see a revival of the theme.

The emerging world society has been slow to address the problem of injustice to women, because it has lacked a consensus on sex-based inequality as an urgent issue of political justice.  The outrages suffered every day by millions of women − domestic violence, child sexual abuse, child marriage, inequality before the law, poverty and lack of dignity  require concerted action. Leadership on these issues comes more often from non-government organizations rather than legislative action  Solidarity and organization are crucial elements to create sustainable ways of living in which all categories of people are encouraged to contribute. 8 March 2018  is a reminder of the positive steps taken but also the distance yet to be covered.

Anticopyright: Editorials and articles originated on TMS may be freely reprinted, disseminated, translated and used as background material, provided an acknowledgement and link to the source, TMS: The Spiritual and Socialist Start of International Women’s Day, is included. Thank you.