All What Your Jeans Can (and Do) Hide!

It Takes Up To 7,500 Litres of Water to Make Just One Pair 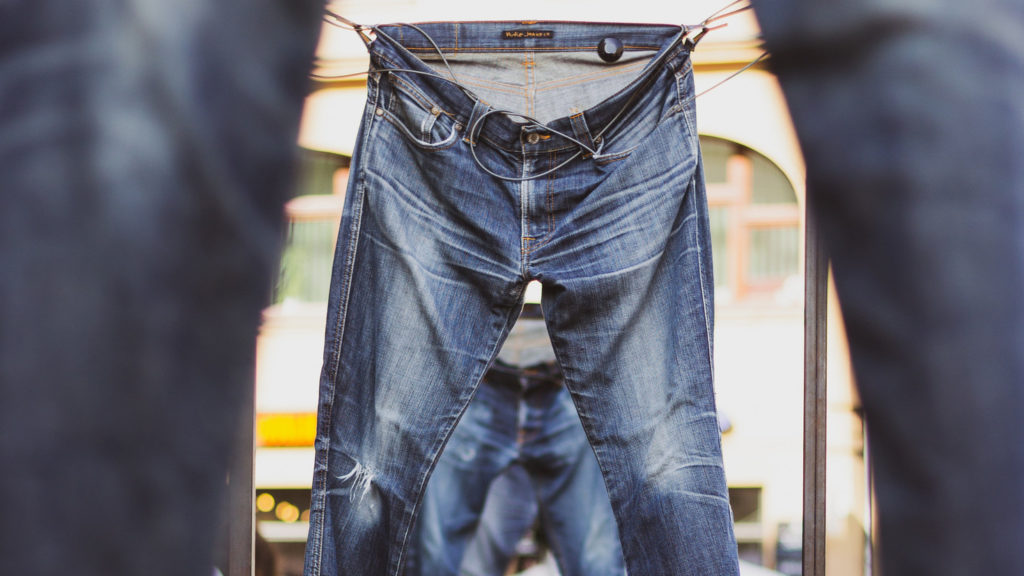 It takes around 7,500 litres of water to make just one single pair of jeans.

1 Apr 2019 – Paris, Milan, New York, Tokyo… These are just some of the world’s most prestigious fashion catwalks. There, and elsewhere, perfectly – and often unrealistically – silhouetted young women and men graciously parade to impress elite guests and TV watchers with surprising, fabulous creativity of the most renowned fashion designers and dressmakers.

Yet, regardless of the amazing costs of such shows – and of what you may wonder how eccentric can be some of the displayed clothing – there is a hidden price that Mother Nature pays (and which is not included in the price tag).

Let’s start with the case of innocent blue jeans: it takes around 7,500 litres (some 2,000 gallons) of water to make just one single pair! Know what this means? It is equivalent to the amount of water the average person drinks over a period of seven years.

“When we think of industries that are having a harmful effect on the environment, manufacturing, energy, transport and even food production might come to mind. But the fashion industry is considered by the UN Conference on Trade and Development UNCTAD, to be the second most polluting industry in the world”.

In fact, according to UNCTAD, some 93 billion cubic metres of water – enough to meet the needs of five million people – is used by the fashion industry annually, and around half a million tons of micro-fibre, which is the equivalent of 3 million barrels of oil, is now being dumped into the ocean every year.

As for carbon emissions, the industry is responsible for more than all international flights and maritime shipping combined. “The dominant business model in the sector is that of ‘fast fashion’, whereby consumers are offered constantly changing collections at low prices, and encouraged to frequently buy and discard clothes”, the UN specialised body further explains.

And it warns that many experts, including the UN, believe the trend is responsible for “a plethora of negative social, economic and environmental impacts and, with clothing production doubling between 2000 and 2014, it is crucially important to ensure that clothes are produced as ethically and sustainably as possible”.

For its part, one of the top world bodies in charge of environmental issues UN Environment provides more conservative figures. It says that considering cotton production, manufacture, transport and washing, it takes 3,781 litres of water to make one pair of jeans. Furthermore, “the process equates to around 33.4 kilograms of carbon equivalent emitted, like driving 111 kilometres or watching 246 hours of TV on a big screen”.

Even just washing our clothes releases plastic microfibres and other pollutants into the environment, contaminating our oceans and drinking water, UN Environment warns and adds that around 20% of global industrial water pollution is from dyeing and textile treatment.

Please also know that some studies estimate that the average garment is worn ten times before being discarded. And that demand for clothing is projected to rise two per cent a year – but the number of times we wear them has dropped one third compared to the early 2000s. Well, the world specialised body goes further to inform that this waste costs money and the value of natural resources. “Of the total fibre input used for clothing, 87 per cent is incinerated or sent to landfill. Overall, one garbage truck of textiles is landfilled or incinerated every second“.

The alliance of the Top Ten

The issue is so alarming that it has pushed 10 different UN organisations to join forces through an Alliance for Sustainable Fashion, which was launched on March 2019 in Nairobi during the 2019 UN Environment Assembly. Elisa Tonda, Head of the Consumption and Production Unit at the UN Environment , one of the 10 UN bodies involved in the Alliance, explained the urgency behind its formation: “The global production of clothing and footwear generates 8% of the world’s greenhouse gas emissions and, with manufacturing concentrated in Asia, the industry is mainly reliant on hard coal and natural gas to generate electricity and heat. If we carry on with a business-as-usual approach, the greenhouse gas emissions from the industry are expected to rise by almost 50% by 2030”.

More than all international flights and maritime shipping combined

The UN Alliance for Sustainable Fashion seeks “to halt the environmentally and socially destructive practices of fashion”. No wonder: “The industry is the second-biggest consumer of water, generating around 20 percent of the world’s wastewater and releasing half a million tons of synthetic microfibers into the ocean annually”, UN Environment reports.
And it reminds us that: “Fashion today is about obsession with outward image and appearance. Rarely do we as consumers consider what’s on the inside: the hundreds of thousands of fibres that make up our clothing which have led to an estimated 1.4 million trillion plastic fibres in the ocean”.

Now last but not least: according to UN estimates: “The fashion industry wields considerable power. It is worth 1.3 trillion US dollars, employing around 300 million people along the value chain”.

Now that we know, who would dare to pull this giant cat out of the bag?