27 Mar 2019 – On 29 March 2019, the United Nations Security Council will hold a discussion largely devoted to the disintegration of the State of Mali, brought into sharp focus by the brutal killing on 23 March of some 135 persons in the village of Ogossagou, mostly women and children.  In addition some 50 persons were badly wounded so the death toll may grow in the near future.  The village of Ogossagou in the middle area of Mali was largely inhabited by Peuls, a cattle-raising group.  Thus many men were away from the village, and it was women and children who were killed, often by being burned alive.

The attackers are widely thought to be members of the Dogon militia group  Dan Na Ambassagou, but uniforms, such as they wear, are easily available on local markets.  Thus others could have dressed in uniforms with Ambassagou badges or patches. This is also a real possibility as the village of Ogossagou is close to the frontier with Burkina Faso where there are also armed militias, not directly related to those in Mali.

France, which had been the colonial power in Mali, sent troops to put down the Twarg rebellion.  The United Nations built on the foundation of the French forces to create a U.N. military, peacekeeping force, the Minusma.  A “peace agreement” was signed in 2015.  However, while the French and U.N. military can prevent a certain number of attacks by militias, they cannot create the decentralized forms of government administration necessary. 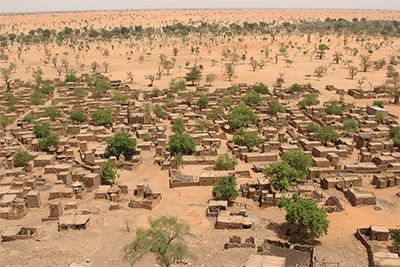 Thus insecurity has continued.  There has been a shift of violence from the north of Mali toward the middle area of the country.  Some of those involved in the north have move to the center.  However, once violence starts, others join in.  Thus we find ethnic groups in the middle area starting to fight each other for reasons not directly related to the causes of the original conflict in the north.

A stark example of this new violence is the struggle between the Dogon and the Peuls.  (Traditionally, the plural of “Peul” was “Fulani” but increasingly there is a tendency to put an s on Peul, which we will do here). The Dogon are well known in French anthropological study.  In order not to become Muslim, the Dogon moved from the plains into mountains with steep sides making their villages relatively easy to defend.  In order not to be tempted to become Muslim, the Dogon strengthened their traditional beliefs and rituals – much to the joy of the French anthropologists who started to study them in the late 1930s. (1)

The Dogon did not consider themselves as a “warrior” group, but in recent time, the concept of “self-defense” has grown among groups in Mali in light of the inability of the government to defend them.

The importance of the U.N. Security Council meeting is highlighted by the fact that the session will be chaired by Jean-Yves Le Drian, French Foreign Minister who had long held the post of Minister of Defense in the precedent administration. The 29 March meeting in New York merits close attention because Mali is not the only example of armed conflicts between pastoralists and settled agriculturalists. We find the same causes of armed conflict in the Darfur conflicts in Sudan and, not directly related, in the conflicts in what is now South Sudan.  These conflicts are likely to spread to wider areas of Africa due to the pressures of climate change and the inability of traditional forms of dispute settlement between agriculturalists and pastoralists to deal with the greater scale of the current situation. In some ways this is a test for “early warning”. It will be important to see what type of structures the U.N. can put into place to deal with a growing issue.

1) On the Dogon, it was Marcel Griaule who was the leader, his key books being  Dieu d’eau, and the later Le Renard Pale. The writing of his co-workers Genevieve Dieterlen and Michel Leiris are also important.

Anticopyright: Editorials and articles originated on TMS may be freely reprinted, disseminated, translated and used as background material, provided an acknowledgement and link to the source, TMS: Dogon-Peul Conflict in Mali Draws U.N. Attention to Broader Settled Agriculturalist-Pastoralists Tensions in Africa, is included. Thank you.