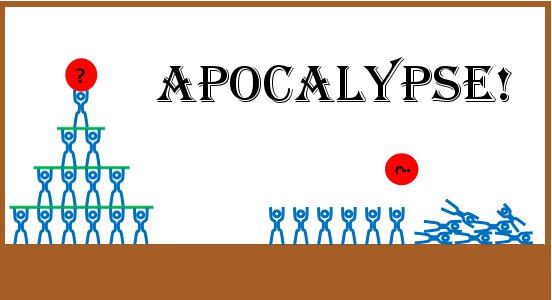 A Martian on reconnaissance mission to earth may well include the following in the report to HQ:

Conflicts rage amongst human beings almost all over Planet Earth. At any given time, many of these conflicts simmer just under the surface, while others flare out in the open. The root cause of conflicts is always land or other resources – such as oil, natural gas, human labour, water, minerals and so on.

Rarely do humans admit that a conflict is about land, oil, or whatever. Instead, they go to great lengths to disguise the real causes of conflicts using fantastic cover stories. Their cover stories are as fantastic as the one about there being no intelligent life on Mars!

Cover stories aim at maintaining collective psycho­logical equilibrium; and over short periods of time they do seem to work. So-called ‘thought leaders’ of human beings invent stories as needed.

A common type of cover story revolves around one group of humans claiming to be ‘superior’ to the rest. That is hard for us Martians to accept, because to us all humans appear alike – with only superficial outward differences among them. Close examination reveals that such claims of ‘superiority’ are aimed only at grabbing more resources from the rest of humans.

Other cover stories are based on (a) self-serving definitions of ‘right behaviour and speech’, (b) ever-mutating economic theories to justify endless resource grabs, and (c) conveniently imagined ‘histories’ to create dubious post-facto justification for resource grabs.

Purveyors of cover stories create a huge top-heavy structure within human societies, with its economic burden falling upon the primary and secondary producers who make up the real economy. This burden is sometimes tolerated by the latter, but often there is deep resentment among them. Purveyors of cover-stories seem heedless of the immense misery produced through their wrong views and actions.

We must study carefully such divisions and weaknesses of human societies, in case humans get funny notions one day of exploiting us and our beloved planet.

Thankfully – and possibly unknown to the Martian agent – there are also individual human beings on earth who are capable of understanding these issues far better than any Martian can. Such individuals are present in every human society – regardless of the ‘superficial outward differences’ among them (borrowing the phrase from the Martian’s report).

At times, such individuals may indeed be flummoxed:

What on earth is going on? Why must there be no end to dehumanizing misery and conflict? Does conflict ever yield lasting peace? Or does it give rise to yet another round of conflict, war, economic devastation – yet another terrible round of misery?

When individuals from different backgrounds debate such issues sincerely – and even if they agree on a common objective – they may disagree on the starting point of the debate. They may fail to find a common path to the shared goal simply because each individual has a different initial premise.

Is there anything – even the tiniest bit! – that all such individuals can agree on? Of course they would agree that we are all Homo Sapiens, but then what? Homo Sapiens is only an assigned biological label; it does not carry with it any essential attribute that can serve as a premise.

Is there any other irreducible minimum that can serve as the basis for logical analysis?

Whatever else he might have been, Gautam Buddha was a thinking individual par excellence – and we shall consider his views only in that capacity. The fact that a religion has been founded in his name is irrelevant here. We only need a candidate premise to serve as irreducible basis for analysis.

The word suffering here includes physical suffering, discontent, anxiety, depression, inner turmoil … et cetera. Every human being – rich or poor – has that experience at one time or another.

The modern culture of unbridled materialism is based on the assumption that, with sufficient material resources available, everybody – at least in the G7 countries! – can reach a stable state of contented life. The idea seems to be that, with technology and clever management, the two existential realities of impermanence and suffering can be negated once and for all. HALLELUIAH!

Naturally, in an illusory permanent state of contentment, an individual would be tempted to craft – and then peddle assiduously! – a marketable ‘personality’ for himself or herself. It is thus that the modern culture totally negates also the reality of non-self, or ‘being in God’.

Thus we see that the underlying premise of the modern materialistic culture – based on technology and management – contradicts all the three existential realities as enunciated by Gautam Buddha.

An open-minded individual now faces a big question. Who is right – Gautam Buddha, or the PR gang of politicians, economists, TV pundits and self-styled fashionistas who dominate the media?

Unlike the PR gang, Gautam Buddha urged his listeners to accept his analysis only if it passed the crucial test of their own individual understanding. Unlike them, he had no personal agenda. Although people had faith in him, his analysis and prescription were not to be accepted on faith alone.

That crucial caveat also holds true today. An individual must reason carefully through the issues related to impermanence, non-self and suffering.

Looking around, it appears that one of two possible answers may be reached:

Reason and faith are two capacities of the mind which can help an individual in coping with life. An exercise of reason requires a premise, which serves as a starting point; and a state of faith pre­supposes a specific divinity, person or other object which serves as an anchor.

A congregation based on shared faith may be centred on a temple, a mosque, a church or even a prayer group. In each case, its role in the community would be similar.

A faith-based congregation helps its members to deal with the difficult aspects of life. Fear of death and the hereafter, the heavy responsibility of family livelihood and children’s nurture, the pain caused by unbridled greed and lust – any community needs help in dealing with these issues.

On the other hand, brazen disregard of existential realities – and therefore of a rational approach to life – begets in a person arrogance, as well as unrestrained greed and lust. If death seems remote, then why not grab all that you can, while you can – and to hell with the consequences! Of course this too is reasoning of a sort – but it is based on a false premise, a denial of existential realities. This is the deluded reasoning of desperation which generates temporary excitement – but eventually only a ‘scorched earth’ type of an outcome.

Indeed, even a faith-based congregation based on Buddha being treated as ‘an incarnation’ would also match the description given here.

We turn now to the word apocalypse.

In the original, secular sense of the word, ‘apocalypse’ means ‘revelation’ – something which was previously unknown becomes known. When Archimedes discovered a certain law of Physics in his bathtub and jumped out shouting ‘Eureka!’ he experienced an ‘apocalypse’.

When a person gains some new wisdom which has significance in life, that experience may be called ‘apocalypse’; although unfamiliar, this usage would not be wrong. A thinking individual must have that experience many times in life, as understanding grows.

Due to the influence of scriptures, however, the word ‘apocalypse’ has also come to mean ‘widespread destruction or disaster’, or even ‘end time’ – although this latter meaning has no relationship to the original meaning of the word in Greek.

Can we reconcile the two meanings of the word using our three-fold premise?

Suppose a society falls into widespread and brazen disregard of existential realities. In the absence of clear thinking, matters would definitely deteriorate. People at large would sense things going horribly wrong – without however having a clear diagnostic. Indeed, the power elites of the society may even punish any attempt at a clear diagnostic.

Is it not plausible that people would then have dark forebodings of an impending ‘breakdown’ – an impending double-whammy breakdown of both reason and of faith?

But then how does an impending ‘breakdown’ become conflated with ‘apocalypse’?

If that is true, then any latter morbid interpretation of the word ‘apocalypse’ must be due to group-think. A mind caught up in such morbid group-think would be wrongly fixated on ‘breakdown’ or ‘end time’ – much like a deer fixated on the headlights of an oncoming vehicle.

The development of inner wisdom is a strictly individual phenomenon. Group-think may have its uses, but it has no essential relationship to inner wisdom. A rational individual must necessarily transcend the limits of group-think. Side by side, a faith-based congregation can provide benevolent mediation between existential realities and community life, avoiding erroneous group-think.

Brazen disregard of existential realities makes a group fragile, with each member out only to grab what he or she can; dishonesty and exploitation spreads. Leaders grow feet of clay and heads full of greed. Community bonds collapse soon after it becomes unfashionable to even talk about them.

Over thirty years ago, Margaret Thatcher famously stated: ‘There is no such thing as society!’

Anticopyright: Editorials and articles originated on TMS may be freely reprinted, disseminated, translated and used as background material, provided an acknowledgement and link to the source, TMS: Apocalypse!, is included. Thank you.