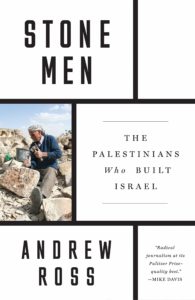 13 May 2019 – On May 10thAndrew Ross came to University of California, Santa Barbara for a discussion of his extraordinary Book, Stone Men, offering the audience a lively presentation enlivened by a PowerPoint array of informative pictures. I took part in a conversation with Andrew that was held prior to giving the small, yet intense, audience an opportunity to participate with questions. And comments. Andrew expressed the most startling aspect of Stone Men in these words: “… it would be no exaggeration to say that the ‘stone men’ of Palestine have built every state in the region except their own.” (3) His very readable text mainly adopts a somewhat narrower focus, concentrating its efforts on the particular role of Palestinian workers and the rich stone quarries of Palestine in the physical evolution of the Israeli state, not only establishing its architectural identity, but also shaping relations between Arab and Jewish workers and labor unions, but also the contradictions that emerged between the market drive for profits by the Israeli private sector and the Zionist willingness to sacrifice profits and construction quality to achieve racial purity, which meant maximal Jewishness.

Reading Andrew’s book was for me quite a humbling encounter. Despite having immersed myself in the literature and politics of the Palestinian struggle for the past two decades I was almost totally unaware of how revealingly relevant to the underlying struggle was this story of the. physical building of urban Israel. This focus provides a parallel and persuasive confirmation of my contention that the ‘original sin’ of Zionism is to establish a Jewish state in a non-Jewish society. It is the original sin because it leads from the earliest Zionist conceptions more than a century ago of a Jewish homeland to the ethnic cleansing of the Nakba, the resistance of the Palestinian people, their repression, the dependence on apartheid methods and structures to control resistance and establish Israeli security.

Andrew’s explorations of the way that this reality is concretely expressed in the building of Israel with Palestinian stones (the most valuable resource of the country aside from water) and Palestinian labor skilled over generations in the craft of stone masonry is not only a grim tale of exploitation and domination characteristic of settler colonialism, but in this case more than most colonial ventures, explicates the Zionist effort to displace the indigenous identity of the country with their own imported brand of coercive displacement or ethnic cleansing and biblical entitlement.  In other words, just as Palestinian stone and water no longer belong to the Palestinian people neither does even the history nor identity of the place. 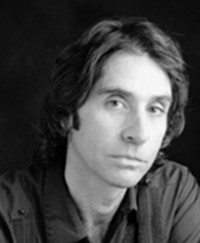 This interaction of displacement and resistance was accentuated and made especially severe due to four linked characteristics: first, Zionism was swimming against the anti-colonial tide of twentieth century history by their project to impose a democratic Jewish state on a non-Jewish societal reality; secondly, such political background also stimulated and sustained Palestinian resistance as an ongoing battleground of anti-colonialism, reinforced by the. global legitimacy of its nationalist aspirations; thirdly, such legitimate resistance, especially in the face of Israeli apartheid and crimes against humanity, has given rise to a global solidarity movement; and fourthly, this entire dynamic is deformed by the continued geopolitical reinforcement of the Zionist Project, especially by the United States, carried to a surrealistic extreme by the Trump presidency.

I especially appreciated Andrew’s avoidance of the tendency of American liberals to treat the two sides in a language of false symmetry. Obama was a master of such rhetoric, characteristically declaring that both sides share blame for the failure to find a peaceful solution and that real peace will depend on painful concessions by both sides. This kind of languages falsifies and deliberately ignores the essential asymmetry of the relationship between Israeli Jews and Palestinians, which as indicated, is an apartheid state premised on inequality and the subjugation of the Palestinian people as a whole. It follows from this that the fundamental first step toward a sustainable peace must come from Israel, which in this instance would require the renunciation of apartheid and the dismantling of its structures. Only on the basis of the existential equality of the two peoples does a sustainable peace based on diplomacy and negotiations become a plausible possibility. This is what happened in South Africa, and incidentally, in a manner that was unexpected by both the experts and the citizenry of the country.

I was also impressed by the refreshing transparencyof Andrew’s scholarly profile, a quality that is in short supply in the academic literature. Such transparency assumes the properties of what I would label as ‘partisan objectivity.’ This contrasts with standard academic writing that hides the author’s point of view behind a veil of detached rhetoric. Andrew makes clear his solidarity with the Palestinian struggle for peace-with-justice as dependent upon the establishment of a democratic secular state, which is a controversial observational standpoint. Such a standpoint implicitly means the end of the Zionist insistence on the identity of post-mandate of Palestine as a Jewish state, which according to the Basic Law enacted by the Knesset in 2018 reserves the right of self-determination exclusivelyfor the Jewish people. This enactment not only reinforces the contention that Israel is guilty of the international crime of apartheid, and as well pushes the logic of Palestinian displacement (Nakba)a step closer to its outer limit. In presenting this narrative of how Israel was built over the decades Andrew presents a range of Palestinian and Israeli voices that give an objective account of perceptions and experience with the author largely limiting his role to recording, listening,  and describing. but this author is also a knowing and feeling subject, and this reality is acknowledged, not suppressed. I regard this as a significant achievement, and a model for the rest of us to follow.

Among the most moving aspects of the book is the exposure of the deep personal and interpersonal conflicts faced by virtually all Palestinians. To earn a living many Palestinians work in the settlements or obtain work permits to take construction jobs across the green line. Such individuals feel fortunate to have these opportunities to earn a living wage, yet this good fortune creates severe tensions within self, family, and community. To survive materially, Palestinian males must often be complicit in Israeli expansionism and apartheid policies. Such a situation confronts individuals with a terrible dilemma of choosing between complicity and criminality, either giving priority to day to day imperatives of survival or to direct participation in resistance. The Palestinian interviewees relate their own experience of throwing stones as a youngster and being a settlement worker as a family provider, which is never an easy path, given the humiliation and acute insecurities that some with such a territory.  Some Palestinians. Interviewed in the book convey their adjustment as in constant flux, being compliant for the sake of paid work, and oppositional otherwise.

It is against this background that I recommend Stone Men so highly. Not only is the argument, the abundant photos, and the evidence gathered impressive and interesting, but the methodology is an exemplary instance of ethnographic studies, relying on copious empirical observation and numerous interviews with Palestinians and Israelis to explain the realities in their own voices. Ross has a gift for quotation that further conveys his underlying, irrefutable message. In this sense the book practices what it preaches—empowerment of people, the inalienable entitlement of a rooted presence in national space, the fabric of injustice as described by those most victimized, and the anti-colonial mentality that can be repressed but not extinguished.

My final assessment: no matter how much you think you know about Palestine, you do not know enough until you have read this book.