The Kentucky Derby, as Told by the Horses 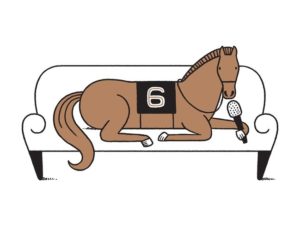 Maximum Security: At first, I wasn’t sure where we were going. I remember being in a small, like, shed, with gates. But the gates were locked. I remember a very loud bell and the gates opened really fast and everyone was running. So I ran. I assumed it was a fire alarm. Also, there was a small man clinging to my back. I don’t know why.

Country House: When the bell rang, I wet myself. It was so loud. The gates flew open and I screamed. Everyone was running like mad. On my back was a tiny man dressed like a bumblebee. He had a stick and he was hitting my ass. Which was weird.

Code of Honor: At first, it seemed like we were running somewhere. It was straight for a while, and then we turned. And I kind of expected there to be something there. Like a barn. Or a pond. Or a Roy Rogers. But it just kind of kept going exactly the same. And then there was another turn. Same thing. At first, I thought it was kind of funny. By the second turn, though, I was, like, This is ridiculous. I kept thinking of that Steve Winwood song “Can’t Find My Way Home.” The live version, with Clapton, at the Crossroads Guitar Festival, 2007.

Gray Magician: I had no idea what was going on. I just remember a lot of women in ridiculous hats.

Country House: There was a horse that was in front. He looked really familiar. I think his name is Duane. But I wasn’t sure. They were calling him Maximum Security. I guess he works in security. But I was trying to catch him, because I think he knows my friend Bob. I’m, like, “Hey! Hey! Do you know Bob?” But he didn’t slow down. He seemed super eager to be in the lead. To this day, I don’t know if he knows my friend Bob. His loss, because Bob is hilarious.

Gray Magician: I was looking around trying to figure out where we were going. I assumed it was a surprise party. I don’t know why I thought that. Maybe because of the hats.

Long Range Toddy: The irony for me is that I don’t love running. I think walking at a brisk pace can give you the same kind of cardio with much less stress on your body.

Country House: It was very crowded and muddy, and I’m thinking, If we have to run around this circle again, I’m going to slap myself.

War of Will: You know how when you’re running for a while your mind wanders? Well, this is kind of embarrassing, but I had just heard this joke the day before, and I decide to tell it to this one horse in front of me, the one leading everyone. I say, “Hey! Hey!” And he says, “What?” But, like, kind of annoyed. And I go, “Why the long face?” Now, I think it’s hilarious, but he says, “Seriously?” And that’s when he put his butt in my face.

Maximum Security: I may have put my butt in his face. But it wasn’t intentional. I was trying to get away from him, like at a party when you’re, like, “Oh, I see someone I know.”

Country House: When I heard him say, “Why the long face?,” I thought, He can’t have just said that. But I looked at him and he’s, like, “What?” And I said, “You know that’s the oldest joke in the world, right?” And I honestly think he had no idea.

War of Will: That’s what made me laugh. And then I stumbled, because it was so funny. I was hoping the little sadist on my back would fall. Unfortunately, he didn’t. And then everyone slowed down. I assumed it had something to do with my joke, and I felt really bad. I’m on the insecure side, and I have a hard time meeting new people—and all of a sudden they’re running away from me.

Long Range Toddy: I was incredibly tired. And really dirty. Everyone was around Duane. I don’t know why. And then I just felt sad, like, what’s the point of it all? Like, why are we here? Why run around and around in circles? And all the hats. I just wanted to go home.

Country House: Then some people came over and put, like, a huge bush on me, with flowers, and they were smiling, like, “Isn’t this great?” It was incredibly strange.

War of Will: I was thinking of telling the joke again but had second thoughts. I’m really glad I didn’t.

Gray Magician: Would I do it again? I’d walk it, if that were an option. I don’t know why they were in such a rush. But, then, I finished last. And I’m O.K. with that.

This article appears in the print edition of the May 20, 2019, issue, with the headline “The Kentucky Derby: An Oral History.”

John Kenney has contributed to The New Yorker since 1999. His most recent book is Love Poems for Married People.