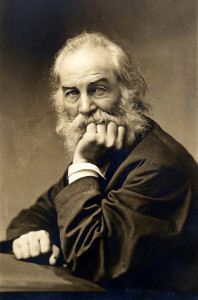 May 31, 2019 is the 200th anniversary of Walt Whitman’s birth in West Hills, New York. The passage of two centuries of continuous war and violence reveals humanity has neither learned nor heeded Whitman’s sage words and pleas for unity, connection, oneness with all things. Whitman’s words and thoughts remain because they are sacred. He beheld the horrors and the beauty of life, breaking with conventional poetic forms, to inspire a 19th century vision of life transcending time… enduring.

I wonder what Walt Whitman would say if he appeared in our time? I know he would recognize the betrayal of history’s lessons, humanity’s continued infatuation with violence and war, and our limited empathy. He would scold us! Reprimand us! Remind us solutions are to be found in compassion and connection, not metal.

In one of those special moments, readily experienced while reading Whitman, I experienced Walt Whitman’s presence. I sought words, feelings, images, wanting to secure his presence, finding in them a profound sense of existing. I wanted to immediately to write a poem honoring his voice and intentions. I wrote a draft poem in sojourn in hours, words tumbling out unimpeded convention. I was possessed by purpose.  I waited a few days, overwhelmed by my efforts to hear his voice, to channel his presence. It is best to rest when you awaken the dead in thought and feeling. This is the poem I created.

My words lack the power and grace of Walt Whitman; but I am consoled by my intentions is good!  My effort is offered in respect and admiration of his Walt Whitman’s timeless talent, and timeless message of the unity across all life.  Happy Birthday, Walt Whitman.

And in the background,
In shadows,
Time unchanged:

“Steal away, steal away; Steal away to . . .
“Deeeeppp river, Lord! My home is over Jordan.

Did you not see what I saw?
Endless rows of blood-stained sheets,
Gaunt nurses placating life,
Tears streaming from bedside widows
Hollow-eyed children begging for bread.

Damn the cannon makers!
Damn the smelters making them!
Damn the voices cheering their firing!
Guiltless . . .
Blind to their sullied metal fruit,
Deaf to cries,
Distance from shot to crater
Buffering conscience.

What use, conscience?
What value, brain?
What function, heart?
What glory, courage . . .
If ignored, denied, separated
From a silent human face.

A face, once admired and prized,
Bursting forth from a mother urging
Her swollen womb;
Grunting . . . screaming
Unfathomable mysteries,
Birthing life!
A face emerges!
Its future . . . inscribed.

Tear down your crosses, crescents, and sacred-angled stars

If you ignore their precepts!

Excuses for madness,
Salve for betrayal,
Gloves for stained hands
Veils for truth.

All is sacred!
Behold grandeur,
Fill senses with awe –
Failing this,
Know you never lived!

At end of day,
Earth will accept your
Crumbled remains,
And . . . try again!
And you will have no choice!

“This is what you shall do:

Love the earth and sun and the animals,
Despise riches,
Give alms to everyone that asks,
Stand up for the stupid and crazy,
Devote your income and labor to others,
Hate tyrants, argue not concerning god,
Have patience and indulgence toward the people,
Re-examine all you have been told
At school or church or in any book,
Dismiss whatever insults your own soul;
And your very flesh shall be a great poem.”

Walt Whitman (1819-1892) is my favorite poet, and in many ways, my favorite humanist. He witnessed the horrors of the American Civil War; their sights, sounds, and smells inspired his commitment to peace. But long before the War, his special senses gave voice to word for changing world about him. He captured time and times!

I find life in his every word, each line and verse, a sacred-clarion call to life! In his words, their pace, stridency, boldness, spring passionate observations, accusations, and visions of hope revealing uncommon and uncompromising courage and wisdom.

In this America, we need a healthy dose of the countervailing idea expressed in our founding Declaration of Independence, what Whitman called our “organic compact” – that all humans are created equal. Just as President and lumberjack, man and woman, black, red or white, should be equals in a democratic universe, so too necessarily, soul and body, spirit and matter, death and life, God and humans. All things in the known universe and in the parts of it that remain unknown are equal. They all partake equally in the cosmos. They are all embodiments of a single reality — the continuum of matter-spirit, body-soul, life-death, God-human, time-space — which Whitman, following Emerson, chose to call “divine.” And if all who are conscious know that they partake of this single divine reality, then how can they let the greed of a few control their aspirations and shape their political and economic destiny. The success of Whitman’s poetry would be evident, he claimed, by the empowerment of those who read and understood him (Levine, 2019).

Nothing more needs to be said. Walt Whitman endures; humanity continues to at risk.

Anticopyright: Editorials and articles originated on TMS may be freely reprinted, disseminated, translated and used as background material, provided an acknowledgement and link to the source, TMS: Walt Whitman Returns. . ., is included. Thank you.