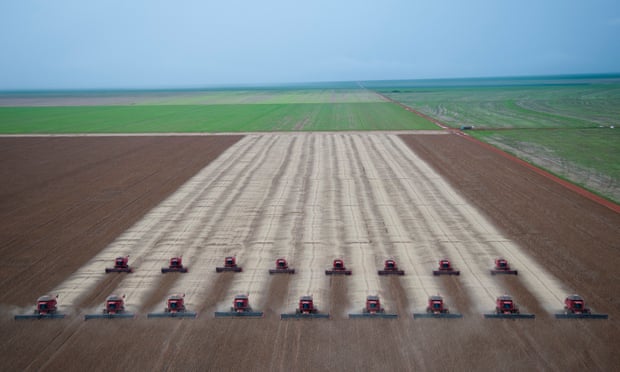 11 Jun 2019 – An area twice the size of the UK has been destroyed for products such as palm oil and soy over the last decade, according to analysis by Greenpeace International.

In 2010, members of the Consumer Goods Forum, including some of the world’s biggest consumer brands, pledged to eliminate deforestation by 2020, through the sustainable sourcing of four commodities most linked to forest destruction: soya, palm oil, paper and pulp, and cattle.

But analysis by Greenpeace International suggests that by the start of 2020, an estimated 50m hectares (123m acres) of forest are likely to have been destroyed in the growing demand for and consumption of agricultural products, in the 10 years since those promises were made. Its report, Countdown to Extinction, said that since 2010, the area planted with soya in Brazil has increased by 45% and palm oil production in Indonesia has risen by 75%.

The environmental group accused major brands of failing to meet their commitments and warned that the current situation was “bleak”, advising them to evolve in order to “prevent climate and ecological breakdown”.

Greenpeace says it wrote to more than 50 traders, retailers, producers and consumer companies early in 2019 asking them to demonstrate progress towards deforestation by disclosing their commodity suppliers.

Only a handful replied and all of those that did disclose the requested information source products from traders or producers involved in forest destruction, they said. None of the 50 demonstrated “meaningful” action to end deforestation, the campaigners said, based on assessing their policies and publicly available supply chain information.

The companies that responded could not provide details on how much soya they were using for animal feed, let alone where it was sourced from, the campaigners said.

Soya is the second most significant driver of global deforestation and 90% of soya produced globally is used for animal feed, the report found.

Anna Jones, global campaign lead for forests at Greenpeace UK, said: “These companies are destroying our children’s future by driving us towards climate and ecological collapse.

“They’ve wasted a decade on half-measures and in that time vast areas of the natural world have been destroyed.

“They should be in crisis talks right now, but they’re still trying to grow demand for products that will drive forest destruction even further.”

She added: “Our message to companies is simple: evolve your business to prevent climate and ecological breakdown.”

About 80% of global deforestation is caused by agricultural production, which is also the leading cause of habitat destruction, the group said.

Agricultural consumption, and therefore production, is forecast to rise globally. Meat consumption is set to rise by 76% according to some estimates. Soya production is also predicted to soar by almost 45% and palm oil by nearly 60%, according to the Food and Agriculture Organisation.

The campaigners said the onus is on brands that use commodities such as beef, palm oil and soya, to show their supply chains are free from deforestation.

Richard George, head of forests at Greenpeace UK said: “Any company using soya needs to be committed to eliminating deforestation and habitat destruction. They need to be aware of where their products come from.

“It’s shocking that 10 years after these companies committed to cutting deforestation, they don’t know how much soya they are using. We are in the middle of a climate crisis. That’s not ok.”

The report, published as chief executives from global brands gathered in Vancouver for the Consumer Goods Forum global summit, said that preventing climate and ecological breakdown will require “transformative changes” to the way forests are managed and agricultural commodities are produced, and “dramatic reductions” in meat and dairy consumption. 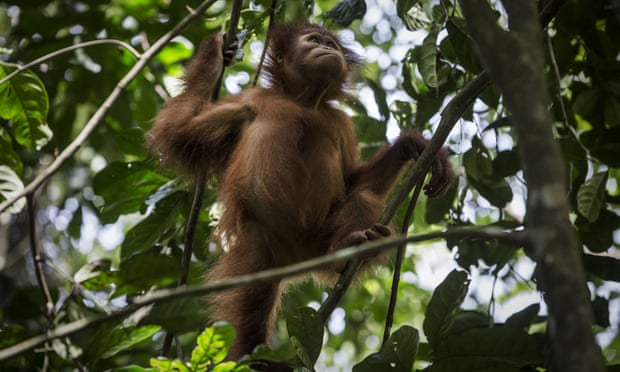 An orangutan at the Sumatran Orangutan Conservation Programme’s rehabilitation centre in Kuta Mbelin. The endangered species continues to lose its habitat through the clearing of peatlands for palm oil plantations.
Photograph: Ulet Ifansasti/Getty Images

“We are experiencing a climate and ecological emergency,” the report said. “Companies that are unwilling or unable to do what is needed to fit the global commodity trade and keep forest destroyers out of their supply chains must instead avoid high-risk commodities entirely.”

In October last year, the Intergovernmental Panel on Climate Change recognised that reforming the food system to ensure the protection of forests is a vital part of the flight against the climate emergency.

And in May, the Intergovernmental Science Policy Platform on Biodiversity and Ecosystem systems warned of an unprecedented decline in nature, accelerating extinction rates and called for “transformative changes” to restore and protect nature.

The Consumer Goods Forum said that while its members purchase only a “small fraction” of the commodities grown in tropical forests, they are playing an “important role” in addressing the issues. These include sharing best practices on the sourcing of commodities, using new technology to increase transparency in supply chains, and co-founding the Tropical Forest Alliance with the US government to reduce deforestation.

In a statement, the CGF said: “Today, the CGF’s members have moved substantially closer to our goal of 100% sustainable sourcing of the four commodity groups. But over the last nine years we have also learned that the forces driving deforestation are more complex than almost any stakeholder realised in 2010.”

The CGF now believes that sourcing certified sustainable commodities is not sufficient to eliminate deforestation, and so has been working over the past 18 months with external stakeholders to develop a more effective strategy, it said. Details of the strategy, which will be discussed at this week’s global summit, will be shared during UN climate week in September, as planned, it said.

Karen McVeigh has been a senior news reporter for the Guardian since December 2006. Before that, she freelanced for the Times following a five-year stint as The Scotsman‘s London correspondent.