A Few Thoughts on Inequality

What does inequality mean? It means a comparison of two or more entities and determining which is, in simplistic terms, bigger or smaller.

In Mathematics, it is quite clear that the numbers say five and ten are unequal and 10 is bigger than 5. Similarly, we may have circles of which one is bigger than the other.

A question arises unequal in what way — in size, in age, in speed, in intelligence, in which feature? A deer is smaller than a donkey in size but it may run faster in speed. Thus when making comparisons or referring to inequalities, one must be clear in which aspect or feature are we making comparison between two or more items or animals or trees or whatever. 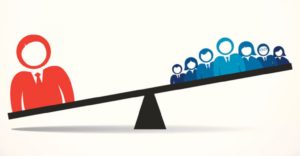 Normally, we almost intrinsically feel that bigger is better. In battle we would prefer a sturdier horse that can run faster than another one , a donkey that can carry more weight than another one. A king with greater number of soldiers and horses or camels would generally win a battle against his opponent. In today’s military environment, bigger guns, bigger canons, bigger grenades etc are preferable to put pressure on your political opponents and so inequality in terms of military hardware is beneficial to the party that has the larger armaments etc.

But sometimes smaller may be better. A book on economics Small is Beautiful  by E F Schumacher talks about economics for ordinary, non-elite people. A butterfly looks beautiful irrespective of its size; so does a small plant with multi coloured flowers. In science a short theorem or formula is generally more meaningful. Pythagoras’ theorem, short in size, conveys much mathematical insight. Perhaps one of the most significant equations despite its small size is the one discovered by the great scientist Albert Einstein that is written as e equals mc square (e = mc2). It conveys some fundamental ideas of physics as discovered by Einstein.

But inequality in human society is dangerous and debilitating to the people who are unequal to others in terms of economic and social status, education, health, availability of suitable jobs and other similar basic requirements.  This inequality is visible to any person who is not overawed by the posters and ads promoting SALES @ 50 percent off for goodies for the rich clientele.

Rich people without being aware are often cruel and unsympathetic to the needs of poor homeless people. They buy expensive villas that have probably been constructed on lands obtained by breaking down the shanties and slums. They consume food, water and other necessities more than required and then waste the excess by throwing away as garbage. Many of us have seen rag pickers picking up rotting food from garbage bins to feed themselves or their families. The rich drive big cars at excessive speed causing injury to persons on the roadsides as well as resulting in environmental degradation.

Their children have all the amenities that young people cherish — sports, weekend trips to exotic destinations, participating in dramas, music fests, speech contests, painting portals and other opportunities that the poor kids can only look at with wonder. They can go to expensive restaurants and relish the attractive delicacies while the children of their servants and other poor kids can only gaze at with awe.

The fashion industry relies on the rich fashionistas to discard clothes they may have used only a couple of times and buy expensive clothes as per the latest fashion.

One can add to the list of social inequities visible mainly in the poorer countries of the world — in South Asia (including India), Africa and parts of Latin America.

Yes, the governments are aware of this debilitating situation. But what can they do? The reins to prosperity are in the hands of presidents and leaders of rich nations — USA, Canada, Japan, China, even Saudi Arabia and the international economic organisations such as WTO, IMF and World Bank etc.

Occasionally, personalities such as Gandhi, Nelson Mandela, Martin Luther King and others who struggle against social, racial, economic injustice and discrimination are born. The International Day for Elimination of Racial Injustice and the forceful propagation of Sustainable Development Goals are not enough to banish or even reduce worldwide inequality and discrimination. The world needs the emergence of stalwarts like Gandhi, Mandela and other honest personalities for this uphill task.

Let us promote peace, harmony, justice and equality in our world.

Anticopyright: Editorials and articles originated on TMS may be freely reprinted, disseminated, translated and used as background material, provided an acknowledgement and link to the source, TMS: A Few Thoughts on Inequality, is included. Thank you.