Orwell’s 1984 No Longer Reads like Fiction. It’s the Reality of Our Times 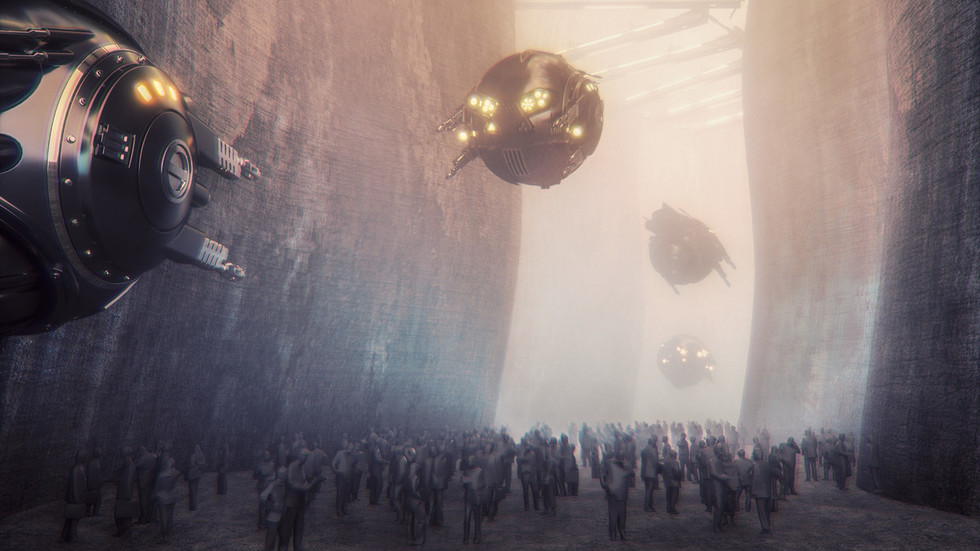 28 Jun 2019 – 70 years ago, the British writer George Orwell captured the essence of technology in its ability to shape our destinies in his seminal work, 1984. The tragedy of our times is that we have failed to heed his warning.

No matter how many times I read 1984, the feeling of total helplessness and despair that weaves itself throughout Orwell’s masterpiece never fails to take me by surprise. Although usually referred to as a ‘dystopian futuristic novel’, it is actually a horror story on a scale far greater than anything that has emerged from the minds of prolific writers like Stephen King or Dean Koontz. The reason is simple. The nightmare world that the protagonist Winston Smith inhabits, a place called Oceania, is all too easily imaginable. Man, as opposed to some imaginary clown or demon, is the evil monster.

In the very first pages of the book, Orwell demonstrates an uncanny ability to foresee future trends in technology. Describing the protagonist Winston Smith’s frugal London flat, he mentions an instrument called a ‘telescreen’, which sounds strikingly similar to the handheld ‘smartphone’ that is enthusiastically used by billions of people around the world today.

"Freedom is the freedom to say that two plus two makes four. If that is granted, all else follows" #orwell #1984 pic.twitter.com/UxisBmL9lZ

Orwell describes the ubiquitous device as an “oblong metal plaque like a dulled mirror” affixed to the wall that “could be dimmed, but there was no way of shutting it off completely.” Sound familiar? It is through this gadget that the rulers of Oceania are able to monitor the actions of its citizens every minute of every day. At the same time, the denizens of 1984 were never allowed to forget they were living in a totalitarian surveillance state, under the control of the much-feared Thought Police. Massive posters with the slogan ‘Big Brother is Watching You’ were as prevalent as our modern-day advertising billboards. Today, however, such polite warnings about surveillance would seem redundant, as reports of unauthorized spying still gets the occasional lazy nod in the media now and then.

In fact, just in time for 1984’s anniversary, it has been reported that the National Security Agency (NSA) has once again been illicitly collecting records on telephone calls and text messages placed by US citizens. This latest invasion of privacy has been casually dismissed as an “error” after an unnamed telecommunications firm handed over call records the NSA allegedly “hadn’t requested” and “weren’t approved” by the Foreign Intelligence Surveillance Court. In 2013, former CIA employee Edward Snowden blew the whistle on the NSA’s intrusive surveillance operations, yet somehow the government agency is able to continue – with the help of the corporate sector – vacuuming up the private information of regular citizens.

Another method of control alluded to in 1984 fell under a system of speech known as ‘Newspeak’, which attempted to reduce the language to ‘doublethink’, with the ulterior motive of controlling ideas and thoughts. For example, the term ‘joycamp’, a truncated term every bit as euphemistic as the ‘PATRIOT Act’, was used to describe a forced labor camp, whereas a ‘doubleplusgood duckspeaker’ was used to praise an orator who ‘quacked’ correctly with regards to the political situation.

Another Newspeak term, known as ‘facecrime’, provides yet another striking parallel to our modern situation. Defined as “to wear an improper expression on your face (to look incredulous when a victory was announced, for example) was itself a punishable offense.” It would be difficult for the modern reader to hear the term ‘facecrime’ and not connect it with ‘Facebook’, the social media platform that regularly censors content creators for expressing thoughts it finds ‘hateful’ or inappropriate. What social media users need is an Orwellian lesson in ‘crimestop’, which Orwell defined as “the faculty of stopping short, as though by instinct, at the threshold of any dangerous thought.” Those so-called unacceptable ‘dangerous thoughts’ were determined not by the will of the people, of course, but by their rulers.

And yes, it gets worse. Just this week, Mark Zuckerberg’s ‘private company’ agreed to give French authorities the “identification data” of Facebook users suspected of spreading ‘hate speech’ on the platform, in what would be an unprecedented move on the part of Silicon Valley.

‘Hate speech’ is precisely one of those delightfully vague, subjective terms with no real meaning that one would expect to find in the Newspeak style guide. Short of threatening the life of a person or persons, individuals should be free to criticize others without fear of reprisal, least of all from the state, which should be in the business of protecting free speech at all cost.

Read Also: Big Brother is keeping ‘Five Eyes’ on you

Another modern phenomenon that would be right at home in Orwell’s Oceania is the obsession with political correctness, which is defined as “the avoidance of forms of expression or action that are perceived to exclude, marginalize, or insult groups of people who are socially disadvantaged or discriminated against.” But since so many people today identify with some marginalized group, this has made the intelligent discussion of controversial ideas – not least of all on US college campuses, of all places – exceedingly difficult, if not downright dangerous. Orwell must be looking down on all of this madness with much surprise, since he provided the world with the best possible warning to prevent it.

For anyone who entertains expectations for a happy ending in 1984, be prepared for serious disappointment (spoiler alert, for the few who have somehow not read this book). Although Winston Smith manages to finally experience love, the brief romance – like a delicate flower that was able to take root amid a field of asphalt – is crushed by the authorities with shocking brutality. Not satisfied with merely destroying the relationship, however, Smith is forced to betray his ‘Julia’ after undergoing the worst imaginable torture at the ‘Ministry of Love’.

The book ends with the words, “He had won the victory over himself. He loved Big Brother.” Will we too declare, like Winston Smith, our love for ‘Big Brother’ above all else, or will we emerge victorious against the forces of a technological tyranny that appears to be just over the horizon? Or is Orwell’s 1984 just really good fiction and not the instruction manual for tyrants many have come to fear it is?

An awful lot is riding on our answers to those questions, and time is running out.

Robert Bridge is an American writer and journalist. Former Editor-in-Chief of The Moscow News, he is author of the book Midnight in the American Empire released in 2013.