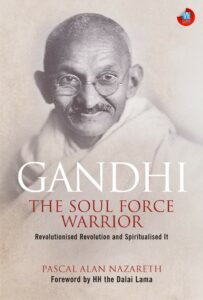 8 Apr 2020 – The book, Gandhi: The Soul Force Warrior by Pascal Alan Nazareth is the latest work about the illustrious Indian political leader Mohandas Karamchand Gandhi described as an ‘apostle of nonviolence’. The author, a scholar and a retired Indian diplomat, tackles in this book the topic of Gandhi’s contribution as a moral leader who through his principles of Truth and Nonviolence that created a thought revolution sounding the death knell for European imperialism worldwide and laying the foundation for reforms of social reconstruction in the newly Independent India.

Nazareth takes up this claim of Galtung to explore Gandhi’s unique contribution and his place among diverse revolutions originating in the West since the Reformation. He highlights evolution of Gandhi’s revolutionary vision, ideology and praxis–its spiritual and other sources–as well as the changing Global and Indian context in which Gandhian “revolution” took place.

The book highlights Gandhi’s transformation from a shy youth to “soul force” revolutionary elucidating the dynamics of and potency of his philosophy of Satyagraha along with its key components of Swaraj, Sarvodaya, Swadeshi, Sanskriti and Trusteeship.  Gandhi described Satyagraha as “soul force”, “truth force”, and “love force” depending on the context in which its use was being tried.

Summarizing Gandhi’s thinking, Nazareth points out that for Gandhi, Satyagraha was an indefinable mysterious power that pervaded everything, a “living power that is changeless, that holds all together, that creates, dissolves and creates…Our life is of that force. That force resides in but is not of the body. He, who denies the existence of that great force, denies to himself the use of that inexhaustible power and thus remains impotent.”

“Satyagraha is soul force, pure and simple and whenever and to whatever extent there is room for the use of arms or physical force, there and to that extent, there is so much less possibility for soul force. These are purely antagonistic forces and I had full realization of this antagonism even at the advent of Satyagraha.”

The author goes on to provide evidence of the above strategy presenting six successful ‘soul force’ revolutions in the USA, Philippines, Poland, Chile, Bolivia and Czechoslovakia. He concludes with projections of such strategy in an era of terrorism and asymmetric warfare.

Reiterating Gandhi, Nazareth points out that the basic dynamics of Satyagraha is based on the immutable maxim, that

“government of the people is only possible only so long as they consent either consciously or unconsciously to be governed and in its dynamic condition means conscious suffering and putting of one’s whole and against the will of tyrant. The strategy is to fearlessly highlight the injustices of the oppressor regime, erode its political, economic and institutional, particularly armed forces support, induce it to negotiate, fashion a mutually acceptable agreement and transform the hostile relationship into a friendly one.” (Young India, 1 August 1920)

Compared to his previous acclaimed work, Gandhi’s Outstanding Leadership, the slim book under review provides an interesting reading. It has a sharper focus supported by a succinct thoughtful analysis.  A book of significant value for peace studies researchers and generalists.

Anticopyright: Editorials and articles originated on TMS may be freely reprinted, disseminated, translated and used as background material, provided an acknowledgement and link to the source, TMS: Gandhi: The Soul Force Warrior, is included. Thank you.