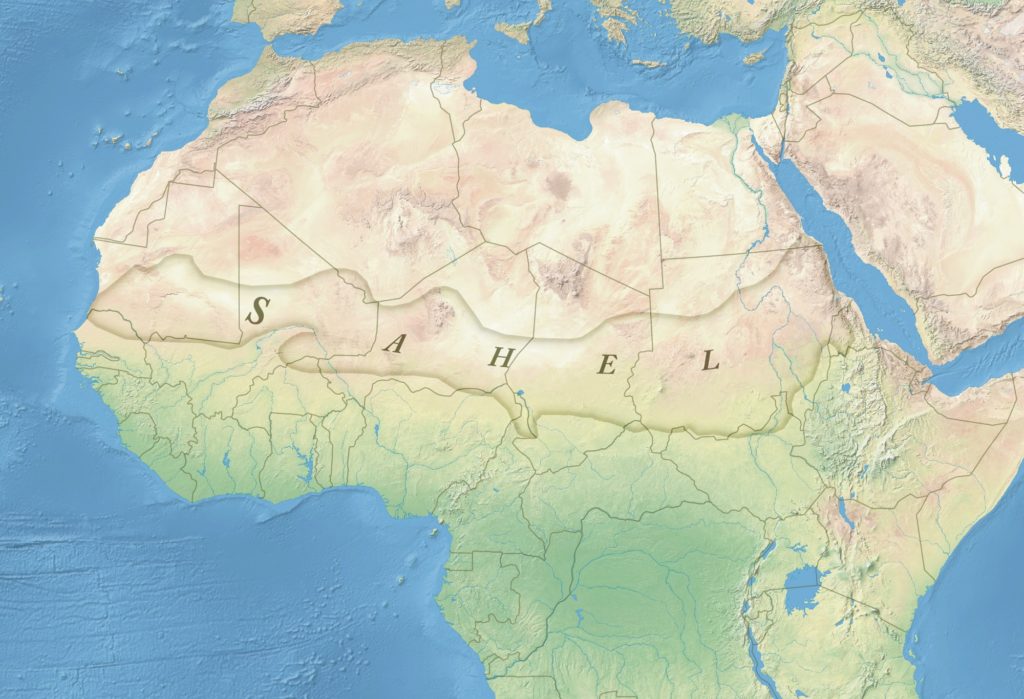 28 Jun 2019 – Despite U.N. troops, French army troops, European Union military trainers, and national armies, instability is spreading in the Sahel five States: Mauritania, Mali, Niger, Burkina Faso, and Chad.  Senegal should normally be added to the Sahel States as part of the country has a Sahel geography, but as the government is relatively stable and free of extremist violence, Senegal is left outside the formal Sahel 5 grouping – all former French colonies.  The French government still plays a large role in the economic, political and security life of these Sahel 5 – what has been called “la Francafrique“.

The current round of instability began in January 2012 when Touareg fighters who had originally been a military force in Libya moved into largely Touareg-populated areas of northern Mali.  They claimed that they were creating an independent country to be called Azawad.  At the time, the Association of World Citizens had suggested that rather than create a separate State, Mali could become a federal state with greater autonomy for the north.  However, the time was not ripe for constitutional reforms.  Touareg troops and Islamist allies started moving toward the center of Mali.  The French government sent in military under the code name Serval to stop them.  The Touareg and Islamist groups retreated into thinly populated areas of north Mali and into other Sahel countries. Since August 2014, the code name of the French troops is changed to Barkhane with a mandate that covers the other four Sahel countries.

The Touareg insurgency has been largely contained or rather replaced by Islamist militias and armed groups of other ethnic groups such as the recent armed attacks by militias of the Peul and Dogon in central Mali.  In addition there is a host of groups involved in criminal activities: the drug trade from South America through West Africa to Western Europe, the arms trade, and the passing of migrants moving through the Sahel States toward North Africa in the hope of reaching Western Europe.  All these crime-related groups are heavily armed and, while they have no stated political aims, they make life unstable.

The government administration of all the Sahel 5 is weak.  Education, health, and rural development services to areas remote from the capitol city are inadequate if not non-existent.  In addition, there has been a prolonged drought of several years, recalling the 1972-1982 period.  The drought may be due to climate change for the area or may be an independent happening. In any case, the drought’s consequences have been to increase migration and instability.

While it is nearly “normal” to counter instability with military forces, the military, especially foreign military, rarely bring about the economic and social reforms necessary.  All the Sahel 5 States are over-centralized under the slogan of “national unity” while decentralization to meet local needs and to develop popular participation is needed.  The military however are “centralizers” as Napoleon reminds us.

It is not clear that the United Nations and national aid programs are adequate to the needs of structural administrative reforms.  They can do little more than “suggest” new administrative structures.  For the moment, the Sahel 5 is a military cooperation effort. Trans-frontier economic and social cooperation remains informal.  Deep structural reforms are needed, but for the moment political leadership seems absent.  The Sahel 5 merit close attention before instability grows worse and spreads more.

Anticopyright: Editorials and articles originated on TMS may be freely reprinted, disseminated, translated and used as background material, provided an acknowledgement and link to the source, TMS: Sahel Instability Spreads, is included. Thank you.