The Ignominious Collapse of the Case against Actor Kevin Spacey

19 Jul 2019 – Cape and Islands District Attorney Michael O’Keefe in Massachusetts announced Wed [17 Jul] that his office was dropping its sexual assault case against prominent actor Kevin Spacey. The prosecution had little choice in the matter since the accuser in the case, William Little, refused to testify 10 days ago about a missing cellphone that the defense argued was essential to the actor’s claims of innocence.

When asked by Spacey’s lawyer whether he understood that deleting relevant text messages from his cellphone would be illegal, Little, after consulting with his family and legal counsel, pleaded the Fifth Amendment against self-incrimination, essentially bringing the pretrial hearing and the entire case to a halt. Spacey was accused of groping the then-18-year-old late at night in a Nantucket bar and restaurant in July 2016. The actor argued that the incident involved consensual flirtation. 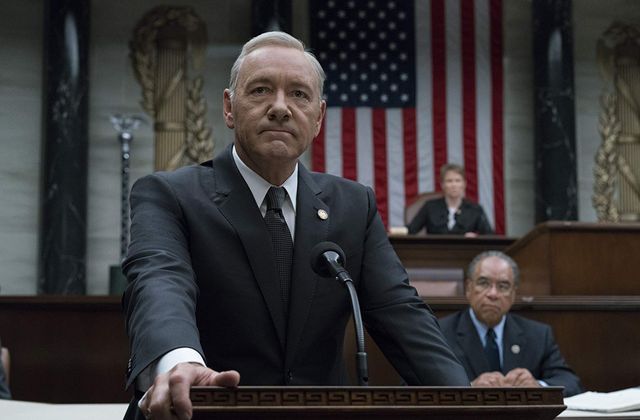 Kevin Spacey in House of Cards

Judge Thomas S. Barrett of Nantucket District Court indicated July 8 the case might well be dismissed if the accuser continued to refuse to testify. Barrett pointed out the case revolved around Little and that without him the Commonwealth of Massachusetts would “have a tough row to hoe.”

A July 17 press release from the Cape and Islands District Attorney’s Office explains,

As a result, the District Attorney’s office entered a Nolle Prosequi, a voluntary withdrawal of charges against Spacey,

“due to the unavailability of the complaining witness.”

The case against Spacey reeked of a politically motivated vendetta from the start.

The Nantucket allegation was launched with great fanfare in November 2018 by Little’s mother, Heather Unruh, a former local news anchor, at a widely publicized press conference in Boston. Unruh proclaimed that she “wanted to see Kevin Spacey go to jail. I want to have the hand of justice come down on him.”

Neither the family nor the authorities ever explained why it took the accuser 15 months to report the alleged assault to police. No objective observer would fail to be struck by the date of the original report, October 31, 2017. This was a few weeks after the #MeToo campaign erupted and only two days after actor Anthony Rapp accused Spacey in an interview of making inappropriate advances to him some 30 years previously, when he was 14 and Spacey was 26, fueling the sexual witch-hunt atmosphere.

Following the filing of charges in January 2019, prosecutors falsely contended that Little made his police report three months after the 2016 incident. However, the “lead investigator in the case…testified Monday [July 8] under questioning from Spacey’s defense attorney that the one-year difference was the result of a ‘typo.’ ” It would take a very naïve person to believe that the possibly suspicious date of Little’s initial police report, coming on the immediate heels of Rapp’s claims, was not a troubling detail to the police and prosecution.

The inability of the prosecution even to bring this miserable case to trial is a humiliating defeat not only for Massachusetts authorities and Unruh, but for the entire #MeToo witch-hunt.

The dropping of the charges against Spacey comes on top of Australian actor Geoffrey Rush’s victory in a defamation suit in April against Rupert Murdoch’s tabloid Daily Telegraph and its celebrity gossip columnist Jonathon Moran. The suit was filed in response to the newspaper’s claims that Rush had been guilty of “inappropriate” behavior towards a co-star in a production of King Lear, as well as its sensationalist publication of the allegations, characterizing Rush as “King Leer,” a “sexual predator” and a “pervert.”

The McCarthyite #MeToo campaign has proceeded largely through innuendo, gossip and unsubstantiated or anonymous denunciations fueled by media frenzy. When charges have been subjected to vigorous investigation and questioning, as in the Rush and Spacey cases, to this point they have evaporated.

The Nantucket case did not by itself destroy Spacey’s extraordinary acting career, but it played its own filthy part. Fantastically, FoxBusiness news lamented Wednesday that while the case against Spacey had fallen apart, “Netflix and Hollywood producers employing the actor [had] lost millions.” We shed no tears for the spineless executives at Netflix, producer of House of Cards, who immediately threw Spacey to the wolves in November 2017. The cowards and opportunists also include director Ridley Scott and Imperative Entertainment who cut the actor out of the already completed All the Money in the World and reshot his scenes with Christopher Plummer.

Following the Cape Cod district attorney’s decision to abandon the case, CBS News “legal expert” Rikki Klieman claimed the dropping of charges “in no way” meant that Spacey had been exonerated. Klieman herself first noted, “If you have a complaining witness who is allegedly a sexual assault victim, who is claiming the Fifth Amendment and is therefore is not going to testify, what have you got? You’ve got nothing.” How is the prosecution having “nothing” against the accused not an exoneration? Klieman attempted to explain: “The prosecution was simply faced with a case that by virtue of the alleged victim…taking the Fifth Amendment, they didn’t have a witness to say what happened.” The “alleged victim” took the Fifth Amendment after he was warned about the illegality of deleting possibly exculpatory evidence. The likelihood of his account of “what happened” being believed was poor.

By now, a great many people have seen through the #MeToo campaign. It never aroused great genuine public sympathy to begin with. The collective realization of self-involved, primarily female Hollywood performers—years after the fact in many cases—that they didn’t like the shabby, boorish way they may have been treated by studio executives and others or, worse still, what they themselves had consented to in the interests of advancing their careers, did not constitute a major national scandal or a cause that the mass of the population had any reason to adopt.

The #MeToo campaign and its leading spokespeople continue to remain conspicuously silent on the conditions of immigrant detainees, subject to systematic brutality and, in many appalling cases, sexual abuse.

The lack of interest in the conditions of working-class women is not accidental. Launched in the aftermath of the 2016 election, the sexual abuse hysteria was aimed from the outset by its Democratic Party and media initiators (Ronan Farrow and others) at whipping up susceptible layers of mostly middle-class professionals, diverting attention from the social crisis and doing everything possible to block a left-wing movement against the Trump administration. The #MeToo effort was intended to create a politically disoriented and toothless non-class, “across-the-board” movement that corporate warmongers such as Hillary Clinton (Farrow’s former boss at the State Department) could effortlessly adopt and promote, thus giving the Democrats breathing space and allowing them to mount their right-wing opposition to Trump, centered on the anti-Russian and other bogus issues.

The ganging up of the media, the police and prosecution and the political system against Spacey indicates something about the reactionary direction and underpinnings of this campaign.

Another indication of this social reality, and specifically of the sexual abuse crusade’s subjectivist, irrational side, is the announcement by actress Alyssa Milano, who initiated the #MeToo campaign with a tweet on October 15, 2017, that she was attending her first Democratic Party fundraiser of the 2020 election cycle, for self-help guru and raging idealist Marianne Williamson, one of the two-dozen Democratic candidates for the presidential nomination. A 1992 article by popular mathematics and popular science writer Martin Gardner reported that Williamson believed that the “Voice” she described in her book, A Course in Miracles, came from Jesus, that “nothing occurs outside our minds” and that “sickness is an illusion and does not actually exist.” According to the Los Angeles Times, she once told a group of HIV-positive disciples that the “AIDS virus is not more powerful than God.”

Despite the Spacey setback, the #MeToo witch-hunt, driven by powerful social forces, will proceed. Both the recent announcement by Netflix that it is was going ahead with a stand-up special with comedian Aziz Ansari and the news that fellow comedian Chris Hardwick was returning to San Diego Comic-Con have come under criticism. Ansari was accused by an anonymous woman in January 2018 of being sexually aggressive on a date, and Hardwick faced unsubstantiated allegations of abuse from an ex-girlfriend. Neither man came close to being charged with a crime, but that didn’t stop each of them from coming under career-threatening attacks.