Global Challenges 2019: Amidst a World in Peril and Collapse

In January 2016, I published an article on Global Challenges and Resources (Marsella, 2016).  The article was submitted to call attention to the broad spectrum of challenges humanity was facing threatening survival and wellbeing.  The challenges were presented in graphic form as a Chart with a topical hub and radiating arms identifying various challenges.

In 2016, I remained hopeful, the better “angels” of humanity could rise from the anthropogenic and natural legacy of destructive ashes characterizing our times, and begin the long-process of building a new era driven by values and policy decisions rooted in the “common good.”

Table 1 displays criteria I proposed for pursuing the “common good.” The criteria were idealistic in many ways as experience has shown global powers are more driven by profit, exploitation, destruction, national and corporate self-interests, militaristic interests, power, maintaining the status quo, pursuit of empire, disregard of social or environmental consequences, national rivalries, and self-ordained power.   These policy-decision priorities stand in direct contrast to the idealistic but essential principles, values, and priorities displayed in Table 1, with obvious consequences, including my despair and demoralization.

Tragically, and there is no other term which best describes the situation in 2019, the global condition is considered by many to be beyond repair. The principles, values, and priorities displayed are reasonable, but incapable of implementation given competing guides serving nefarious interests.  Is this then the fate of the world, Earth, and life forms, to be dismissed as unimportant regardless of their impact.

Cries of extinction because of dramatic climate change, omnipresent violence and war, population explosions, technological ascendancy, destruction of human rights and privacy by mass surveillance and archiving, corrupt government and criminal economic systems, have converged in 2019 presenting insurmountable challenges; one wonders are with wealth, power, and position, holding on to some madness for their personal survival at the expense of others and of life.

I find myself wondering; was my idealism, my belief in reason and shared concerned across the last three years a defensive fantasy?  I have constantly observed our global condition, searching for signs the challenges were diminishing, and humanity was rising to the task of addressing and resolving at least some of the challenges. I must now admit, much to my despair and demoralization, efforts directed toward solution are minimal in number and inconsequential. Global challenges continue, unmitigated; increased awareness and consciousness have proven insufficient. “The die is cast!”

Life on Earth as we have known it is caught in a deadly spiral of disorder- amplified feedback, creating an ever increasing, almost logarithmic course of toward extinction because connections among challenges. Globalization created an interdependency, or better yet, the hegemonic globalization of economically, politically, militarily powerful nations, which was pursued to increase wealth, power, and position, ultimately has created a vulnerable system of inescapable complexity and intervention. 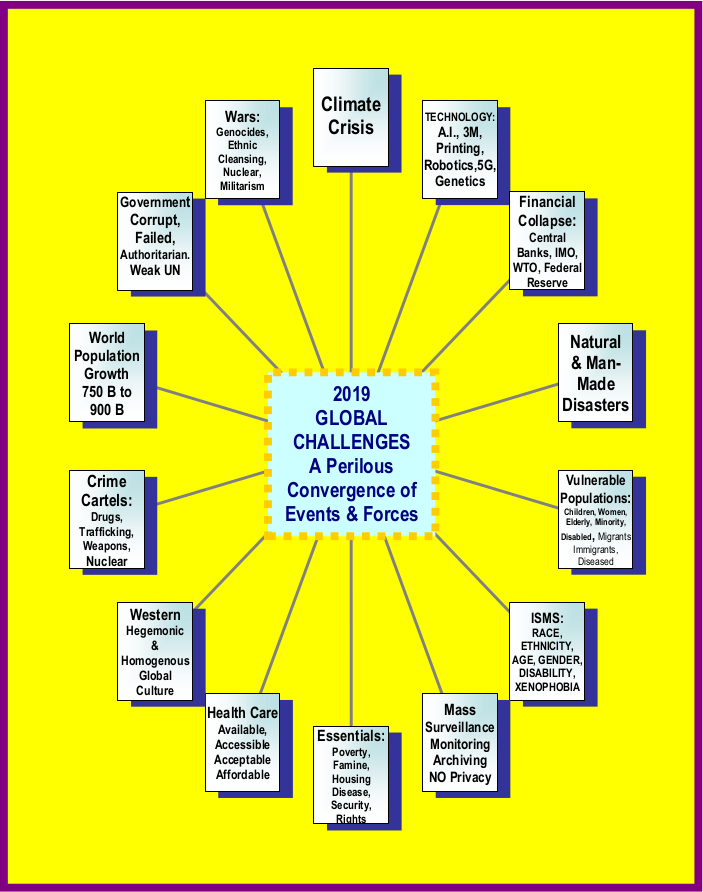 It is notable many global challenges exist which are not displayed but also warranted attention and concern.  Consider the fact the majority of the world’s population live or will live in cities raising the issue of “urbanization.” Cities are unprepared to address the migration to cities and resources needed to handle increased populations, especially those in need of assistance. Further, there is the failure of education systems to prepare students and adults for living in a world of diminishing energy, food, and human resources and the demands this will place upon survival and wellbeing skills.

A new global ethos is needed! A set of assumptions, beliefs, and practices — a code, a mantra, a guide for living! Existing guides are proving insufficient (e.g., Ten Commandments, “Golden Rules,” Code of Hammurabi, Justinian Code, Nation Constitutions). They are noble in intent. But they do not capture the spectrum of challenges before us, and they have few consequences for violations. Even promises of “Hell” seem powerless. (Marsella, 2016)

Even as nations and societies speak of the need for more laws, rules, regulations, morality, and ethics, there is little adherence or respect for the Universal Declaration of Human Rights (UDHR). There are appeals to national constitutions, professional ethic codes, and compliance to religion and theological standards and commandments, all to no success. Indeed, these vary standards loom as sources of global problems as they stand in conflict within and with one another.

Most obvious to all today is migration, a topic deserving of immediate critical attention. Desperate populations from around the world (Central America, Sub-Saharan Africa, East Africa, China, Myanmar), seek migration as an opportunity for personal and familial survival, only to find rejection and punishment at sites considered viable for entry. European nations (e.g., Italy, Hungary, Britain, France, Balkan States, Israel) have taken strident measures to discourage migration, it is the United States which has proven the most in-hospital and cruelest, brutal government addressing international migration.

Regardless of national and international criticism and accusation, USA government under the guise of “legality” has revealed the true nature of its draconian measures: “Make America White Again!” Torn by internal population fractionation against Blacks, Latinos, Muslims, Asians, and Caribbean, USA government has revealed a Nazi-Like ethos under current government officials and policies. While its allies cheer it on in shared concerns, the plight of the world continues to decline.  Perhaps we must ask: “To whom does the world belong?”

In 2016, I identified a number of societal models as global aspirations. Was I naïve to think enduring human virtues would arise in salvation?  Tragically, I am no longer sanguine, even as I know voices will criticize me for abandoning optimism. Please help me see reasons for hope! Please tell me sources for halting global decline as challenges overwhelm our capacities to resolve them. There are obvious examples of brave and courageous voices and bodies speaking of our situation, and pressing for organized efforts to resolve challenges separately and as a group.

I am, as Bishop Tutu, eloquently stated, “A prisoner of hope!” Hope, however, requires some anchor which gives it context, and nurtures its reality. I feel inadequate to the task, but offer the life affirming words of a thirteen century Nun, Hildegard of Bingen (1098-1179 CE) as timeless and sacred words.

I am that supreme and fiery force that sends forth all living sparks. Death hath no part in me, yet I bestow death, wherefore I am girt (girdled) about with wisdom as with wings. I am that living and fiery essence of the divine substance that glows in the beauty of the fields, and in the shining water, and in the burning sun and the moon and the stars, and in the force of invisible wind, the breath of all living things, I breathe in green grass and in the flowers, and in the living waters. . . . All these live and do not die because I am in them . . . . I am the source of the thundered word by which all creatures were made; I permeate all things that may not die. I am LIFE!

Anticopyright: Editorials and articles originated on TMS may be freely reprinted, disseminated, translated and used as background material, provided an acknowledgement and link to the source, TMS: Global Challenges 2019: Amidst a World in Peril and Collapse, is included. Thank you.

2 Responses to “Global Challenges 2019: Amidst a World in Peril and Collapse”