1 Aug 2019 – As many as 30 federal Australian parliamentarians attended a closed-door legal briefing by Jennifer Robinson, a lawyer for Julian Assange, at Canberra’s parliament house yesterday. The MPs included representatives of the conservative parties, Labor and the Greens. 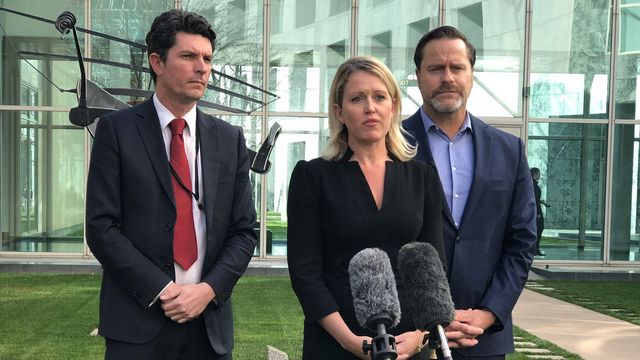 The world-renowned barrister reportedly outlined the dire implications for press freedom and democratic rights of the US-led persecution of Assange. She called upon the government to intervene in his defence as an Australian citizen and journalist and to raise his plight with US Secretary of State Mike Pompeo and Secretary of Defence Mike Esper when they visit the country this weekend to participate in annual Australia-United States Ministerial Consultations.

Pompeo and Esper are touring the region to drum up support for Washington’s aggressive confrontation with China, and its military provocations internationally.

In 2017, Pompeo, as head of the Central Intelligence Agency, denounced WikiLeaks as a “non-state hostile intelligence service” and branded Assange a “demon.” Pompeo played a key role in the stepped-up pursuit of Assange, which culminated in the issuing of 18 US charges against the WikiLeaks founder, including Espionage Act counts, carrying a maximum sentence of 175 years’ imprisonment.

A fact sheet that Robinson distributed to MPs and the media noted that the US was seeking to prosecute Assange for “regular journalistic activity” that included the publication of “disclosures of Chelsea Manning.”

These “detailed war crimes and human rights abuses committed by the US government and its agents, including the groundbreaking Collateral Murder video, Iraq War Logs, Afghan War Logs, Cablegate and the Guantanamo Bay Detainees Manual.”

Robinson rebuked media outlets that have claimed that Assange is not a “journalist.” She wrote: “Any attempt to compromise his status as such is driven by the US legal strategy alone, as this robs him of a vital defence under the First Amendment. If Mr Assange is instead slandered and made to look like a ‘hacker,’ it denies and erases Mr. Assange’s professionalism as a journalist and publisher, and contributes to the narrative that the material Chelsea Manning provided to WikiLeaks is therefore illegitimate.”

This slander was aimed at affecting a “shift in focus from the war crimes and other embarrassing materials WikiLeaks exposed.”

Robinson warned: “Mr. Assange is at great risk of human rights abuses should he be extradited to the US, therefore urgent political representations are highly appropriate and necessary in this matter given Australia’s human rights obligations.”

The fact sheet reported that there was “currently a deportation notice issued by the UK” to deport Assange to Australia. If Britain did not extradite him to the US, “the Australian government will be asked to accept him as a deportee. It is then possible that the US will seek his extradition from Australia under the US/Australian extradition treaty.”

The briefing was likely the largest gathering of parliamentarians to discuss Assange since the entire Australian political establishment signed up to Washington’s persecution of him in 2010.

The event reflected concerns within the ruling elite over the popular opposition to the Trump administration’s bid to prosecute Assange for his role in WikiLeaks’ exposure of illegal wars, mass surveillance and global diplomatic conspiracies.

Since Assange was dragged out of Ecuador’s London embassy on April 11, there have been indications of growing anger among ordinary people over the Australian government’s refusal to take any measures to prevent his extradition from Britain to the US.

Socialist Equality Party rallies in Australia attended by hundreds of workers, students and young people and viewed by tens of thousands online, have indicted the official parties, including Labor and the Greens, for their refusal to protect Assange. They have demanded that the Australian government use its legal discretion and diplomatic powers to secure his release and return to Australia, with a guarantee against extradition to the US.

Robinson said she had “serious concerns” about Assange’s health, after seven years of arbitrary detention in the Ecuadorian embassy without access to sunlight. She confirmed that he remained in the hospital wing of Britain’s maximum security Belmarsh Prison. “His health has obviously deteriorated significantly and there’s likely permanent damage on his health as a result from his time in the embassy.”

The lawyer noted that UN Special Rapporteur on Torture Nils Melzer had deemed Assange to be the victim of “psychological torture.” Robinson also said the conditions in which Assange is being imprisoned are obstructing the preparation of his legal defence.

Robinson declared: “He does not deserve the treatment he has received and it’s time for the Australian government to speak up.”

Whish-Wilson, who accompanied Robinson at the media conference, said Prime Minister Scott Morrison and Foreign Minister Marise Payne “must raise the issue of Assange” with Pompeo and Esper. “He must be brought home,” the senator stated.

The event was undoubtedly a breach in the protracted attempts by the political and media establishment to suppress any public discussion of Assange’s plight. None of the parliamentary parties, however, issued any statements on Robinson’s briefing. Her remarks were largely blacked out by the corporate media and the Australian Broadcasting Corporation.

The parliamentary establishment’s refusal to defend Assange is not the result of a lack of information. It flows from the support of all the official parties for Australia’s integration into US war preparations and their commitment to ever-more authoritarian measures to counter mounting social discontent.

The Greens-backed Labor government of Julia Gillard denounced WikiLeaks as a criminal organisation and pledged to help the US intelligence agencies destroy it. This was while senior US politicians were calling for Assange’s assassination because of his exposure of Washington’s war crimes.

Every government since has continued this criminal collaboration in Assange’s persecution. Most recently, Liberal-National Coalition and Labor leaders have spoken of providing him with unspecified “consular assistance,” but done nothing to prevent his ongoing persecution.

This line-up against the WikiLeaks founder underscores the importance of mobilising the immense social and political power of the working class internationally to secure his liberty and to defend all democratic rights.

It was to take forward this critical struggle that the WSWS and the International Committee of the Fourth International last month launched a Global Defence Committee to free Assange and the courageous whistleblower Chelsea Manning. All workers, young people and supporters of democratic rights should join it today.