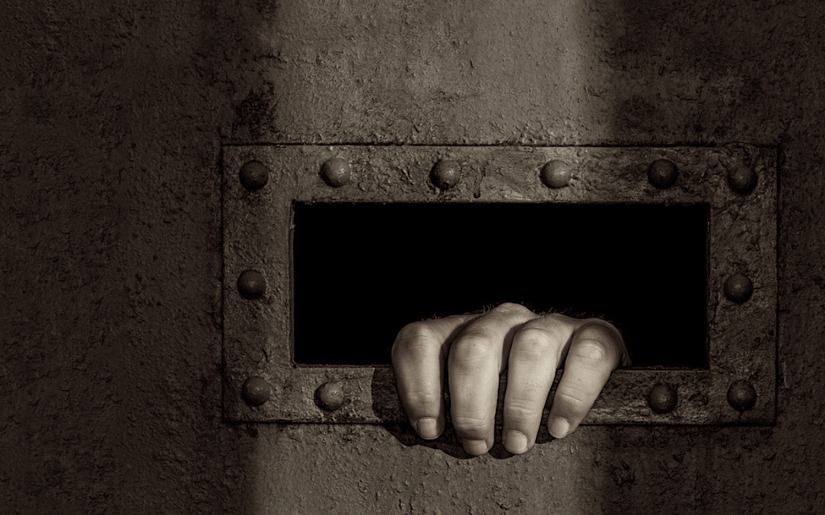 4 Aug 2019 – The latest report about kidnappings, rendition, ‘black sites’ and torture is a remarkable piece of investigative work. It provides us with nothing less than a litany of shocking evidence and testimony and at 403 pages it makes for truly grim reading. This article is made up of a very brief set of extracts from the just-released CIA Torture Unredacted report. It presents the findings from a four-year joint investigation by The Rendition Project and The Bureau of Investigative Journalism into the use of rendition, secret detention and torture by the CIA and its partners in the ‘War on Terror’.

Attempts to hold UK authorities to account for their role in the rendition (kidnapping and/or movement of suspects) and torture programme have been thwarted at every turn. Successive governments have repeatedly denied any involvement of UK security service or military personnel in torture or CIDT. Even as credible evidence mounted, officials were slow to fully investigate, were reticent about holding anyone to account, and have done very little to offer meaningful redress.  In 2010, the incoming UK Coalition government led by David Cameron finally launched a judge-led inquiry chaired by Peter Gibson, which was closed down before witnesses were even called, in part because of the considerable constraints placed on the Inquiry by government. Indeed, successive UK governments have gone to great lengths to suppress vital evidence, including passing legislation precisely for this purpose and continue to this day to resist repeated calls for a new inquiry.

Between 2001 and 2009, the CIA established a global network of secret prisons (‘black sites’) for the purpose of detaining terrorism suspects, in secret and indefinitely, and interrogating them through the use of torture and other cruel, inhuman and degrading treatment. The abuses which took place were severe, sustained, and in clear violation of domestic and international law. The perpetrators have never been held to account. The Rendition Project’s website (www.therenditionproject.org.uk), provide the most detailed public account to date of the CIA torture programme.

Information about CIA torture programme prisoners had to be prised out of the US military’s unwilling bureaucracy. But already at that time, there were rumours of an even more secretive programme, run in parallel by the Central Intelligence Agency outside the Pentagon’s chain of command. Press stories spoke of people abducted in the middle of the night, manhandled onto planes and never heard of again.

The torture programme was a highly secret endeavour, with the CIA and its partners going out of their way to hide the existence of a secret prison network dedicated to the indefinite detention and torture of terror suspects. It has taken years of investigation, by journalists, lawyers, parliamentarians and human rights investigators, for the broad contours of the programme to be revealed.

A pioneering combination of sophisticated analysis techniques and detailed open-source research, the report unveils crucial data which the CIA tried to hide in its censorship of the torture report. This data paints an unprecedented picture of the inside details of the black site programme.

State officials have gone on to deny the impact of, or even the existence of, CIA torture, including through the use of euphemistic language. This was not a programme of ‘enhanced interrogation’; this was torture.

Many prisoners, it turned out, were there on the basis of malicious, false or inaccurate information, had been handed over by bounty hunters, or had been imprisoned because they wore a certain type of Casio watch. These were the people the Bush administration called ‘the worst of the worst’ 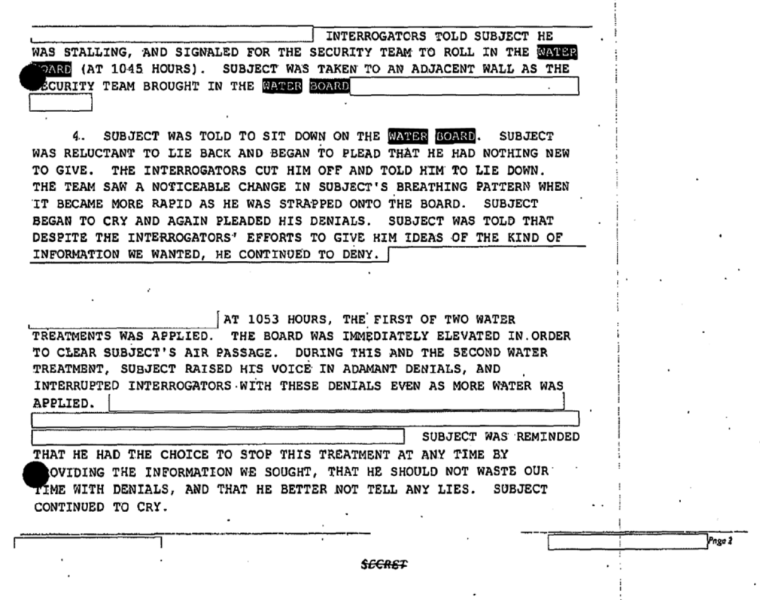 Cable from the Thai black site, describing the fifth continuous day of a prisoner’s torture (of eight days)

Prisoners were drugged, shackled, hooded and strapped to stretchers by rendition teams dressed entirely in black and communicating only in sign language. Some were placed in coffins during the flight; others were beaten repeatedly during their transfer. This procedure was designed, in the words of one memo, to create ‘significant apprehension in the detainee because of the enormity and suddenness of the change in the environment, the uncertainty about what will happen next, and the potential dread they might have of US custody.

Some prisoners were then subjected to mock execution, electro-torture, genital mutilation, mock burials, rape, and stress positions so severe that, in one case, observers were concerned that the prisoner’s arms would dislocate from his shoulders. Suspects detained in these prisons were subjected to an interrogation regime designed, in the words of one interrogator, to take them ‘to the verge of death and back again

One man had been waterboarded – drowned to the point of convulsions, vomiting and unconsciousness – 183 times in one month. Others had been placed for hours in boxes so small they had to crouch, or deprived of sleep for weeks at a time. One had been killed – through a combination of neglect, ill-treatment and avoidable hypothermia. This wasn’t ‘enhanced interrogation’. This was torture. 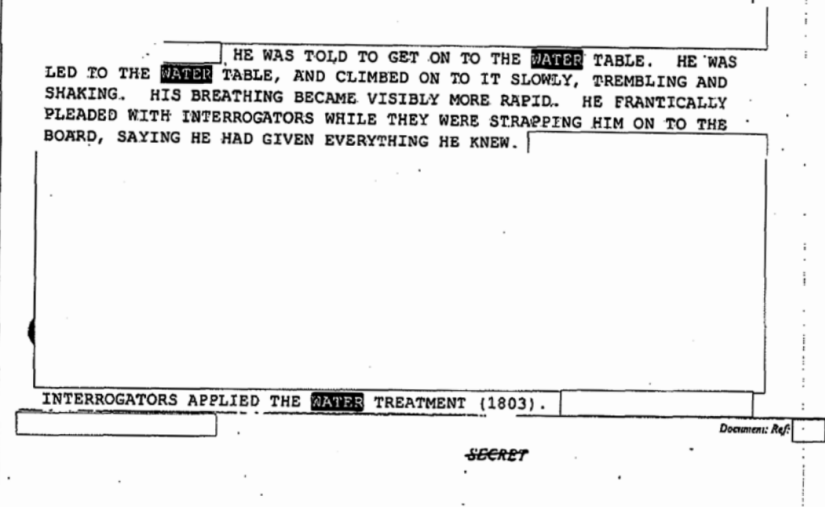 Cable from the Thai black site, describing the eighth continuous day of a prisoner’s torture.

“Then, they took me to a room and hung me by my hand to an iron shackle where my toes hardly touched the ground. They removed the mask away from my face and left me hanging from one hand, naked, thirsty, and hungry. I regained my breath after they removed the mask but soon enough I began feeling tired from being hung, hungry, and thirsty. All my weight was hung from the iron shackle until my hand was about to be cut off and the blood was going down to my feet. All my body parts were shaking because of cut off blood circulation and my pulled and beaten body began hurting all over and my head, nose and mouth started bleeding. Although I was not able to see anything due to the darkness, I was able to smell and taste the blood that was falling down my throat.”
— Testimony from Ahmed Rabbani (#25)

The Rendition Project and The Bureau of Investigative Journalism moved significantly beyond the findings of past investigations, shedding new light on the inner workings of the programme and tracking in detail the operation of the CIA’s black sites, the use of private aircraft to transfer prisoners secretly between these sites, and the fate and whereabouts of those subjected to secret detention, rendition and torture. In particular, we have filled in many of the gaps in public understanding which still exist after the Senate Select Committee on Intelligence (SSCI) decided to withhold its full Committee Study into the programme, and – alongside the CIA and the White House – to heavily redact the Study’s Executive Summary before its publication in 2014.

Despite the fact that the programme operated within the context of significant international cooperation, the Committee Study also fails to address in any detail the role played by other governments, and by partner intelligence and security agencies. This absence is perhaps most glaring in the case of those countries which hosted the CIA’s black sites, but is also significant in cases where other countries provided material and intelligence support for capture and rendition operations, or for interrogations under torture.

In this sense, no case was more significant than UK support for the programme, and the absence of all mention of British involvement in the Committee Study is striking.

Although none of the official inquiries into Britain’s role in abuses have published full details of specific cases, documents obtained by Human Rights Watch from a government building in Tripoli in September 2011, in the immediate aftermath of the fall of the Gaddafi regime, provide compelling evidence of British involvement in a number of these operations.

Once suspects were in secret detention, British intelligence and security agencies were, in many cases, intimately involved in the torture that took place, either by participating in the interrogations, by providing the intelligence that formed the basis of the torture, or by receiving intelligence gained through torture. The ISC found that, in at least 232 cases, UK officials supplied questions or intelligence to partners after they knew, or suspected, that mistreatment of the detainees in question was taking place.

Although the CIA played the lead role, officials and personnel from a number of other states – including other powerful liberal democracies such as the United Kingdom – were deeply implicated in the abuses which took place, as were a number of private companies.

The role played by the UK in the CIA torture programme is also highlighted by the degree to which British territory was used by CIA aircraft as refuelling stops while undertaking rendition operations. Collation and analysis of flight data associated with CIA rendition aircraft, and the correlation of this with data concerning prisoner transfers, has allowed us to establish that UK involvement in the rendition programme was much more extensive than previously thought. British territory was central to the rendition of at least 28 prisoners between secret prisons, some of whom were subjected to torture. Mainland UK was used to facilitate the rendition of so-called ‘high-value detainees’ to secret detention in Poland – others were rendered to proxy detention in Egypt, Jordan or Morocco on aircraft that used UK territory as a staging post. 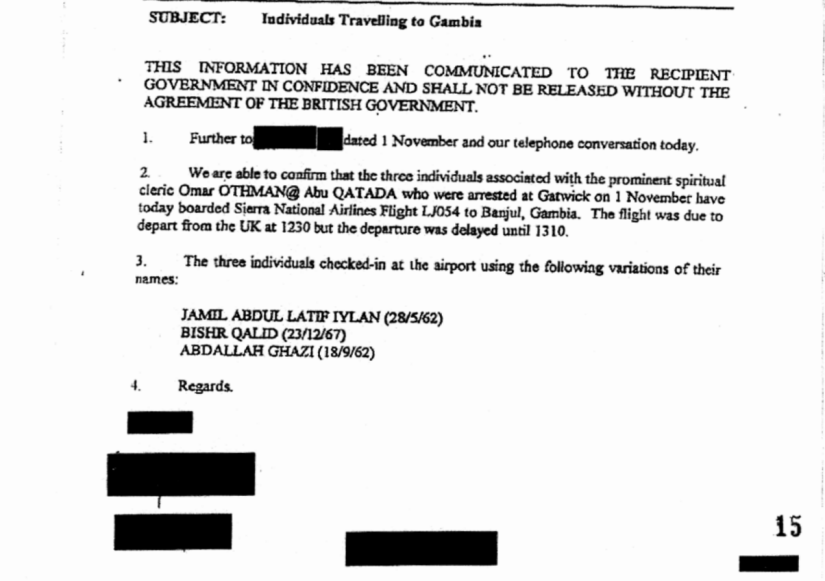 Telegram from MI5 to the CIA, confirming the travel plans for Bisher al-Rawi
and Jamil el-Banna. Both were arrested and eventually rendered to Afghanistan
(Circuit 16)

Interrogations involved being severely beaten, and repeatedly slammed against walls. Others were subjected to water torture which induced vomiting, hypothermia and unconsciousness. Men were raped, mutilated, and threatened with guns, drills and being buried alive. They were strapped to chairs and to tables. They were hung upside down and beaten. They were chained to the floor in ways making it impossible to stand or sit. They were deliberately, systematically dehumanised in an attempt by interrogators to exert complete control.

Prisoners were held in complete darkness for months on end, chained to bars in the ceiling and forced to soil themselves. Continual loud music, combined with extended sleep deprivation, dietary manipulation and stress positioning were deployed to reduce men to a completely dependent state.

This is not the first time we have published our findings from this investigation. We have previously outlined the ways in which we tracked CIA rendition aircraft to understand more fully the use of secret detention in Europe. We have provided expert testimony to the European Court of Human Rights (ECtHR), which found that the involvement of European states in the torture programme led to multiple violations of the European Convention on Human Rights. We have assisted citizen-led efforts at accountability for CIA torture. We have published the most detailed public account of British involvement in torture in the ‘War on Terror’, and have helped to guide parliamentary, commissioner and police investigations in relation to this.