Nelson Mandela and Mahatma Gandhi were two great icons of the twentieth century. Their births, their backgrounds, their education, however, were starkly different from each other.

But their common struggles against British colonialism in South Africa and India for justice, equality, and independence is what brought them together. They both saw discrimination and injustice in various forms, and suffered imprisonment as a result of their peaceful struggles against colonialism to achieve their objectives of social and racial justice.

Nelson Mandela (1918 – 2013) was born in Mvezo in Cape Province of the country. Trained as a lawyer like Gandhi, Mandela opposed the racial regime of apartheid in South Africa for which he was jailed for twenty seven years. He was released in 1990 by President de Klerk. Subsequently Nelson Mandela headed the African National Congress ANC from 1991 to 1997 and was elected the first President of the country that had been freed from apartheid in 1994. He continued as President till 1999. This was a major event since this was against colonialism and apartheid and was for racial, social, economic justice for all the people of the country. Mandela received many awards including the Nobel Peace Prize in 1993 and India’s highest civilian award Bharat Ratna in 1990.

Mohandas Gandhi (1869 — 1948) had gone to England in 1888 to study law. Soon after his return to India, he was invited by a South African law firm to come to Africa to assist them in their legal work. He set sail from Bombay in 1893. He planned to stay in Africa for about a year but as it turned out he stayed there for 21 years and returned only in 1914. This was a challenging and learning experience for Gandhi.

In Africa, Gandhi not only suffered racial discrimination and injustice himself but also saw the local people as well as the hundreds of Indians suffering all sorts of indignities and injustice at the hands of the colonial masters who treated local and non-white people  with inequality and injustice.

Gandhi met many scholars and learned persons and discussed about means of liberating the local populations from discrimination and violence. He read many books including religious texts, corresponded with Leo Tolstoy and other scholars and started getting some ideas about liberating mankind from violence, injustice and lack of freedom. One method that he discovered was the idea of peaceful, nonviolent protest that he called Satyagraha, for achieving these objectives. He met many African leaders including Nelson Mandela, Bishop Tutu and other pro-people leaders and scholars to refine and firm up his ideas of liberating people not only of Africa but also of India which was also suffering from colonial excesses in India.

It is said that Gandhi had gone to South Africa as Mohandas, but returned to India as Mahatma Gandhi.

After having learnt the idea and efficacy of peaceful protests against injustice, Gandhi’s first Protest or Satyagraha as it is commonly called was in Champaran in the state of Bihar. He and a few of his followers  protested successfully in 1917 against the British policy of compulsory growing of the crop of indigo for export to England and beyond that was ruining the conditions of local farmers.

Gandhi also suffered imprisonments and other excesses from the British rulers in India, but like Mandela, overcame all vicissitudes and saw India become an independent country in 1947. Today his birthday 2nd October is designated as the International Day of Nonviolence. He is also known for truth, religious amity and love for the environment.

Gandhi inspired many persons — Nelson Mandela, Bishop Tutu, Martin Luther King and others for his emphasis on nonviolence, truth, simplicity and religious harmony. India is celebrating the 150th birth anniversary of Gandhi this year by organising many events, talks and Seminars. Another Seminar was recently held in University of Delhi on the Legacies of these two great freedom fighters. It is a remarkable fact that both these icons are not only admired and respected but their photos are printed on the respective currencies of the two countries – Gandhi’s photo on the Indian rupee and the photo of Nelson Mandela on the South African Rand. 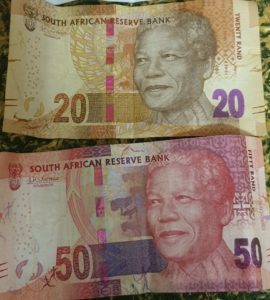 Anticopyright: Editorials and articles originated on TMS may be freely reprinted, disseminated, translated and used as background material, provided an acknowledgement and link to the source, TMS: Nelson Mandela and Mahatma Gandhi – Struggles for Justice, Independence and Peace, is included. Thank you.

2 Responses to “Nelson Mandela and Mahatma Gandhi – Struggles for Justice, Independence and Peace”