White Supremacy before Trump: The U.S. Conquest of Hawaii

August 21 marks the sixtieth anniversary of Hawaiian statehood. Many Americans know little more than package tours and “Pearl Harbor” about the fiftieth state, and few realize that when the U.S. naval base was attacked by the Japanese, it was not at the time U.S. territory. Even fewer have any idea how Hawaii came to have an important American naval base capable of triggering a world war. James Baldwin called our perpetual ignorance of vital historical matters American “innocence,” the inability to face or even recognize ugly facts about ourselves. In relation to Hawaii such innocence continues to render us oblivious of the imperial power grab that robbed the islands of their national independence 126 years ago.

As long as Great Britain deterred rival powers from colonizing the islands, U.S. leaders championed Hawaiian independence. In 1842, President James Tyler declared that Washington coveted “no peculiar advantages, no exclusive control over the Hawaiian Government, but is content with its independent existence and anxiously wishes for its security and prosperity.” Essentially extending the Monroe Doctrine to Polynesia, the U.S. would oppose any nation’s attempt “to take possession of the islands,” colonize them, and subvert the native government.” Hawaiian independence was also recognized by the major European powers, among others, and affirmed by many treaties and proclamations.

As the nineteenth century proceeded, however, the balance of power shifted towards the United States, offering new imperial opportunities unlikely to be ignored.  Rear Admiral Samuel Francis DuPont declared that it was “almost impossible to estimate too highly the value and importance of the Hawaiian Islands, whether in a commercial or a military sense.” Militarily, the islands were an important link in the chain of U.S. naval bases that would eventually encircle the world.

Economically, they offered important raw materials and primary agricultural products, as well as a market for industrial and processed goods, a familiar imperial pattern. In fact, by the end of the nineteenth century Hawaii was an economic satellite of the mainland:  90% of its foreign trade was with the U.S., the booming sugar industry far and away the most important. 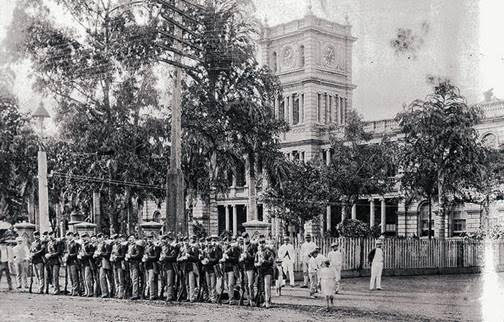 U.S. troops from USS Boston across the street from ‘Iolani Palace January 17, 1893

As a result, the U.S. “self-defense” perimeter expanded to include Hawaii, then menaced by what the white planter class called a ninety percent “ignorant majority.” The dilemma for the oligarchs was that their plantations required abundant cheap labor, performed by Asian immigrants and Hawaiians, but the political system had to be in the hands of the white planter minority in order to avoid wealth redistribution via the ballot box. So Washington took up the white man’s burden of guiding and assisting the Hawaiians – so “low in mental culture” – on their journey from grass-hut backwardness to civilized existence.

Native Hawaiians, who shrank from about 350,000 when Captain Cook arrived to about 35,000 by 1893, were conspicuously ungrateful for the unsolicited favors. In 1886, Planters Monthly editorialized that the naïve Hawaiian “does not yet realize” the “bounds and limits fixed” and the “moral and personal obligations attending” the gift their imperial benefactors were bestowing on them: “The white man has organized for the native a Government, placed the ballot in his hands, and set him up as a lawmaker and a ruler; but the placing of these powers in his hands before he knows how to use them, is like placing sharp knives, pointed instruments and dangerous tools in the hands of infants.” Naturally, the children had to be put to bed if the “men of best quality” were to get their imperial work done. 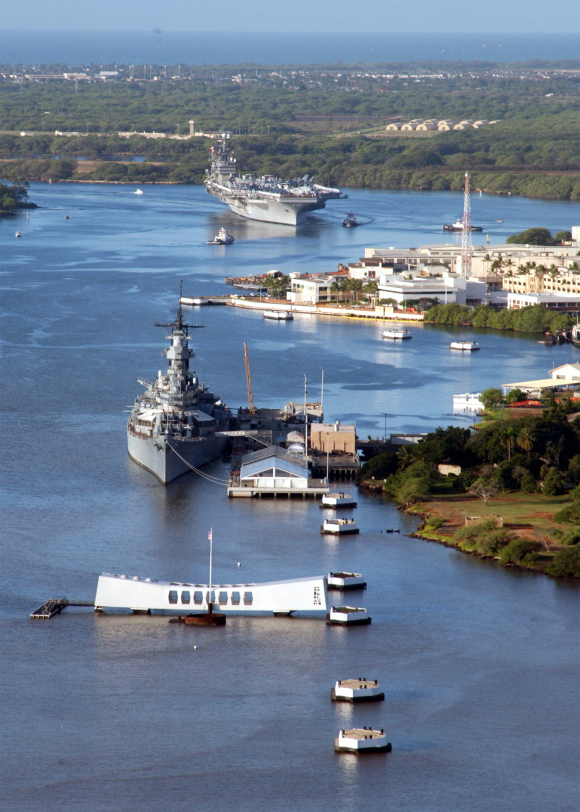 In 1873, just thirty years after President Tyler had loudly endorsed Hawaiian independence, the Marines landed to support the colonists. When the plantation oligarchs failed to take power in the elections of 1886, they launched a coup d’état the following year, assisted by their military arm the Hawaiian Rifles. The “Bayonet Constitution” imposed on the king awarded U.S. citizens the vote while banning Asians as aliens and excluding a large part of the native population with property qualifications. The Pearl River estuary became a site for a U.S. naval base.

The increasing numbers of Asians populating the islands inflamed “yellow peril” paranoia. (In 1890, Asians represented 32% of the population; three decades later they were 62%). The Hawaiian Gazette editorialized that “the asiaticizing of the Hawaiian Islands is proceeding at such a rapid rate that those citizens who know what such a course must lead to, may well stand appalled before such a prospect.” The Honolulu Advertiser was more succinct: “It is the white race against the yellow. Nothing but annexation can save these islands.” Maui lawyer Lorrin Thurston outlined the so-called demographic threat to the plantation oligarchs: “Four-fifths of the property of the country is owned by foreigners, while out of an electorate of 15,000 but 4,000 are foreigners – thus placing the natives in overwhelming majority.” So increasing numbers of white plantation owners favored annexation as a way of eliminating the dominant Hawaiian-Asian majority as a political force, while keeping cheap immigrant labor flowing.

In 1891, the U.S.S. Pensacola arrived in Hawaii “to guard American interests,” which included over two-thirds of the investment capital in the dominant sugar industry. The following year an Annexationist League was formed and laid plans for a coup d’etat, quickly supported by Washington. In January 1893, Queen Liliuokalani made a final effort to preserve Hawaiian independence, eliminating wealth qualifications and granting the right to vote exclusively to Hawaiians. On order of U.S. Minister John Stevens, a staunch annexationist known for his “partiality for white folks,” U.S.  troops landed and imposed martial law, in support of “the best citizens and nine-tenths of the property owners of the country,” in the words of the expedition’s commanding officer. Minister Stevens informed the U.S. Secretary of State that “the Hawaiian pear is now fully ripe and this is the golden hour to pluck it.”

Speaking for the “overwhelming majority of conservative and responsible members of the community” – at most, a few hundred wealthy men – U.S. planters and their Hawaiian collaborators declared “that independent, constitutional, representative and responsible government, able to protect itself from revolutionary uprisings and royal aggression, is no longer possible in Hawaii under the existing system of government.” Queen Liliuokalani surrendered under protest to the “superior force of the United States of America” and its troops, abdicating in hopes of sparing her followers the death penalty. She herself was fined $5000 and sentenced to five years at hard labor, though the sentence was commuted in 1896.

An annexation treaty presented by President Harrison to the U.S. Congress expired under President Cleveland after an investigation of the coup revealed popular backing for Queen Liliuokalani rather than the provisional government of the planter class. With the continuing rapid influx of Asians to the islands portending a loss of white political control Teddy Roosevelt warned of a “crime against white civilization.” Only one remedy stood out: diluting the local Hawaiian-Asian majority by annexing the islands to the white-dominated mainland.

In 1898, President William McKinley confided to his secretary that “We need Hawaii, just as much and a good deal more than we did California. It is Manifest Destiny.” The Missionary Record agreed, explaining that annexation was what Jesus would have wanted. “Has it ever occurred to you that Jesus was the most imperial of the imperialists?” The Reverend Wallace Radcliffe gushed that the ends justified the means, that U.S. imperialism was “enthusiastic, optimistic and beneficial republicanism,” and “not for domination but for civilization, not for absolutism but for self-government.”

McKinley’s anti-imperialist opponents sounded little better, recoiling in horror from the prospect of annexing “a country an overwhelming majority of whose population consists of kanakas, Chinese, Japanese, and Portuguese.” Nebraska Senator William Allen warned that so-called steak-and-potato Americans had been thrust into “deadly competition with those who live on a bowl of rice and a rat a day.” A California representative fanned the flames of racist hysteria speaking of “the immoralities unmentionable” and the “nameless contagions” created by “Asiatics.” He read an article entitled “Shall We Annex Leprosy?” into the Congressional Record.

In the more sedate senior chamber, Massachusetts Senator George Frisbie Hoar dismissed the wishes of Hawaiian natives on grounds of absurdity: “It would be as reasonable to take the vote of children in an orphan asylum or an idiot school.” The sovereign Hawaiian government and its “dusky Queen” he declared, were “things of the past.”

In the grip of white plantation owners and swarming with Christian missionaries, Hawaii was annexed by joint resolution of Congress. 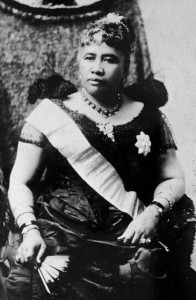 Queen Liliuokalani, the last Hawaiian queen, deposed by US marines.

“It had not entered into our hearts that these friends and allies from the United States, even with all their foreign affinities, would ever go so far as to absolutely overthrow our form of government, seize our nation by the throat, and pass it over to an alien power…”

“Perhaps there is a kind of right, depending upon the precedents of all ages, and known as the ‘Right of Conquest,’ under which robbers and marauders may establish themselves in possession of whatsoever they are strong enough to ravish from their fellows…. we have known for many years that our Island monarchy has relied upon the protection always extended to us by the policy and the assured friendship of the great American republic. “

“If we have nourished in our bosom those who have sought our ruin, it has been because they were of the people whom we believed to be our dearest friends and allies…”

“The conspirators, having actually gained possession of the machinery of government, and the recognition of foreign ministers, refused to surrender their conquest. So it happens that, overawed by the power of the United States to the extent that they can neither themselves throw off the usurpers, nor obtain assistance from other friendly states, the people of the Islands have no voice in determining their future, but are virtually relegated to the condition of the aborigines of the American continent.”

Gatewood, Willard B., “Smoked Yankees” and the Struggle For Empire, (University of Illinois, 1971)

Landau Saul (with Paul Jacobs and Eve Pell), To Serve The Devil: Colonials and Sojourners, (Vintage, 1971)

Williams, William Appleman, The Roots of the Modern American Empire – A Study of the Growth and Shaping of Social Consciousness in a Marketplace Society, (Random House, 1969)

Takaki, Ronald, Strangers From a Different Shore – A History of Asian Americans, (Penguin 1989)

Loewen, James, Lies Across America – What Our Historic Sites Get Wrong, (New Press, 1999)

Michael K. Smith is a political writer who co-blogs with Frank Scott at legalienate.blogspot.com.