Wildfires Rage throughout the Amazon Rainforest 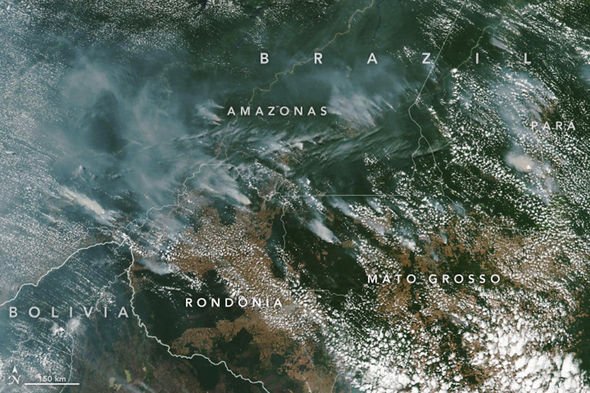 Amazon rainforest fire: The smoke from the fires can be seen from space (Image: NASA)

23 Aug 2019 – Satellite imagery reveals that at least a quarter of the Amazon rainforest is on fire or covered in soot and ash across the four Brazilian Amazonian states: Amazonas, Rondônia, Mato Grosso and Pará.

A combination of dry summer heat exacerbated by climate change, planned burnings and expanded deforestation of the Amazon rainforest has sparked at least 9,507 new wildfires in the region in the past week, for a total of more than 74,155 wildfires in the Amazon since January. According to data from Brazil’s National Institute for Space Research (INPE), this represents an 84 percent increase in Amazon fires from last year and the highest number of wildfires in the region since the agency began its records in 2013.

Cities across the region were blanketed with smoke, including Brazil’s largest city São Paulo, where wildfire smoke from Rondônia, Bolivia and Paraguay combined with dense rain clouds and a cold front which blotted out the Sun and brought nighttime lighting hours early. Amazonas declared a state of emergency on August 9 and residents across South America have been encouraged to stay indoors, particularly those with respiratory problems, heart or lung diseases.

While wildfires are a part of the life cycle of the Amazon, the massive increase in the number of fires this year is a direct result of the policies of Brazilian President Jair Bolsonaro. Since coming into office, Bolsonaro has sought to increase the exploitation of the rainforest so that Brazil’s agricultural and mining industries can better compete on the global market, including an increase in logging and burning and a massive reduction in monitoring and oversight of these activities.

These policies are guided by “the new hopes for the Homeland: Brazil above everything!” a slogan uncovered in documents recently leaked to the online news site democraciaAbierta. They reveal that one of Bolsonaro’s major initiatives will be the so-called “Triple-A” project, which states, “it is necessary to build the Trombetas River hydroelectric plant, the Óbidos bridge over the Amazon River, and the implementation of the BR-163 highway to the border with Suriname.” Bolsonaro has also previously stated that he plans to bring nuclear power into the rainforest.

All of these projects will require major inroads into the Amazon, destroying hundreds of thousands of acres of rainforest. They also represent an attack on the one million indigenous people who live in the rainforest and have relied on it for millennia, whom the Brazilian president has specifically targeted for forced integration into capitalism, even if it means their extermination.

Bolsanaro responded to the wildfires in typically fascist fashion, by claiming without any evidence that they were started by nongovernmental organizations supported by foreign powers opposed to his policies. In an interview given at the entrance to the Alvorada Palace, the official residence of the president of Brazil, he stated that environmental protection NGOs are trying to discredit his government after he cut funding to the Amazon Fund. During the same interview, he also threatened to use Brazil’s military to catch the supposed arsonists.

In another attempt to shift blame of his administration’s policies, the Brazilian president fired the head of the INPE on August 2 for publishing this year’s Amazon wildfire data in the first place. The INPE also produced data showing that this year is not particularly dry or hot when compared to previous years or other mass wildfires in the Amazon, pointing indirectly to the impact of the current administration’s antienvironmental policies. Bolsonaro called the data “lies” that were harmful to the country’s ongoing trade negotiations.

He also attempted to brush aside the significance of the environmental disaster by stating that the fires were merely a part of “queimada,” the time of year when farmers use fire to clear land for crops. When pressed about destruction currently underway, Reuters reports that Bolsonaro responded, “I used to be called Captain Chainsaw. Now I am Nero, setting the Amazon aflame.”

Bolsonaro’s response is indicative of the attitude of an entire social layer toward Earth’s environment. The pyromaniac dinosaurs in Brasilia and their fascistic co-thinkers the world over, chief among them US President Donald Trump, do not see the loss of one of the world’s most critical ecosystems as a devastating event, but rather as the cost of doing business to further enrich themselves and their fellow oligarchs.

The deforestation of the Amazon as a whole, which began in the 1970s, has potentially catastrophic implications for life both in South America and across the globe. The rainforest is responsible for 20 percent of Earth’s atmospheric oxygen and typically absorbs 1.5 gigatons of carbon a year, a major factor in regulating Earth’s atmosphere and climate. The region also contains an estimated one-fifth of the world’s fresh water supply.

It is also home to hundreds of recorded species of mammals, reptiles and amphibians, thousands of different birds and fishes, tens of thousands of different plants, millions of insects and countless lifeforms that have yet to be discovered. To date, a quarter of all pharmaceutical drugs have been derived from ingredients found in the Amazon rainforest.

Moreover, research has shown that deforestation is not a linear process and is poised to cascade. While current deforestation of the Amazon stands at about 17 percent, if it reaches between 20 and 25 percent, the entire ecosystem will begin transforming into a savannah or desert, essentially killing off the most biologically diverse region on Earth.