There are several cultural, religious festivals and celebrations all over the world. Some are celebrated to remember and honour a God or a Deity in which people have faith in. One such festival is Christmas; although it is a Christian festival to honour Christ, it is celebrated all over the world on 25 December by non- Christians also. Similarly Jewish, Muslim, Buddhists and Sikhs have special days to remember and celebrate their own Gods or leaders.

The Hindu festival of Diwali that is celebrated on the return of Lord Rama after his fourteen-year exile from his kingdom has also become very popular in several parts of the world. The celebrations take the form of lighting of Diyas (lights) apart from singing of songs, recitation of prayers and distribution of sweets. Sometimes even the White House in USA or the Parliament House in UK is lit up in honour of thousands of the Hindu people living in these countries.

Similar gaiety and happiness is witnessed on Lord Krishna’s birthday, Janamasthami, by millions of devotees in many parts of the world. Krishna now enjoys a world wide popularity in which the ISKCON (International Society for Krishna Consciousness) plays a significant part. There are hundreds of ISKCON temples all over the world — Europe, America, Asia, Australia in addition to several in India itself.

Apart from these religious festivals, there are other events celebrating or honouring various Gods and Goddesses such as Saraswati the Goddess of Knowledge, Durga for her victory over evil etc. in India some festivals usually coincide with the arrival of agricultural crops – wheat, rice, fruits, lentils etc. One  such is Ganesh (with a face that of an elephant) Chaturthi festival that celebrates the arrival of rice in the month of August/September. As a matter of fact this is being celebrated in Delhi University and elsewhere on 2 and 3 September and will continue for another week.

Apart of these festivals or special days, an important and an endearing Utsav (festival) is Malhar Utsav  beseeching the clouds to shower their blessings by providing rains on parched lands. This event consists of singing the Malhar Raga (melody) hoping that the Megh (clouds) will enjoy the music and pour rains in plenty.

In fact a few years back, the Department of Music of Delhi University was organising the Malhar festival. After a few speeches by eminent men and women musicians, the Malhar Raga (melody) was being sung by two students. Lo and behold, after a few minutes, one could hear the thunder of clouds as it started raining outside the Hall. People started clapping and there was joy and laughter on that occasion. 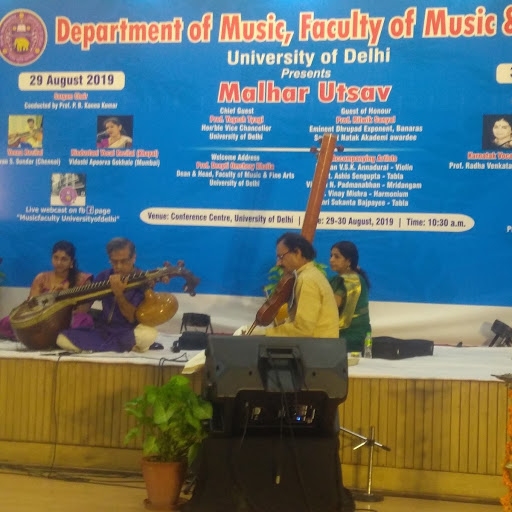 The festival, many established Indian musicologists assert, is not just of music, but symbolises the advent of clouds, rain, birds, peacocks, flowers and rivers and generates happiness, contentment within a person,  and harmony with nature. It also represents not just musical delight, but also signifies concepts of joy, sorrow, art forms, brotherhood — in other words our very existence, our heritage, our civilisation.

Some people compare the music of Malhar Raga with the music of Wolfgang Mozart. People familiar with western music and in particular, the music of Mozart, the eighteenth century Austrian genius who composed several operas and symphonies will appreciate the joy and happiness that music such as Malhar Raga can bestow on appreciative ears. One feels surrounded by a sense of peace, harmony and bliss listening to such music— be it western or Indian classical music.

These traditional forms of culture, dance and music are gradually being replaced by today’s forms of jazz, soul, pop, loud music which often have dissonant and complex rhythms. Today’s music is fast and often called popular music in contrast with the traditional or serious forms of music. These changes represent the changes in our socio political lives. But good music, dance and culture, traditional or contemporary, give a sense of peace, harmony and inner strength that is what we all cherish in this complex world.

Anticopyright: Editorials and articles originated on TMS may be freely reprinted, disseminated, translated and used as background material, provided an acknowledgement and link to the source, TMS: Cultural Festivals of India — Joy, Peace, Harmony, is included. Thank you.