Zarif spoke at length without a manuscript, in details and with references to facts and history of the region and the conflict’s history – based on a cohesive framework of theories, concepts and interpretation – which, taken together, places him in a category of his own among the world’s foreign ministers.

Lecture and discussion at SIPRI – Jan Eliasson to the left, Zarif to the right:

One should indeed be grateful to SIPRI for having invited him.

Generally speaking, leading Swedish mainstream media have been promoting a negative view of Iran as well as Javad Zarif himself. The largest coverage has been about human rights in Iran, Iran as a threat and backer of terrorism, the death penalty, and the protests by a group of exile-Iranians who protested outside SIPRI’s building – about Iran being pressed economically and Mr. Zarif himself being in a weakened position. And about an Iranian journalist who defected during the delegation’s visit to Stockholm.

Media have also emphasized that Zarif is conducting a “tour of charming” and is himself a “very charming” and experienced diplomat – the subtle implication being that he can’t be trusted.

The Swedish Television’s point of departure is that he is a man under pressure trying to save the JCPOA – implying that he/Iran is negotiating from an underdog position – instead of saying that the US is the only one to have withdrawn from the deal, stepped up suffocating sanctions and that the EU has been unable to mobilize de facto support for the deal and stand up to its commitments – namely to step up its co-operation with Iran.

In this short podcast you can also hear the Swedish Radio’s Middle Eastern correspondent, Cecilia Uddén, say that Zarif is in Europe to collect support for Iran’s case and that, charming as he is, he even “does not at all look like the other aytollahs”… and that he never wears a tie or a turban… (!)

Here is Dagens Nyheter, Svenska Dagbladet – both emphasizing in the headlines that he criticized president Trump – the Swedish Broadcasting (Sveriges Radio) – for readers here who happen to read Swedish.

None that I have seen have had the intellectual capacity to convey the detailed, elaborated and well-presented points that the foreign minister delivered at SIPRI. 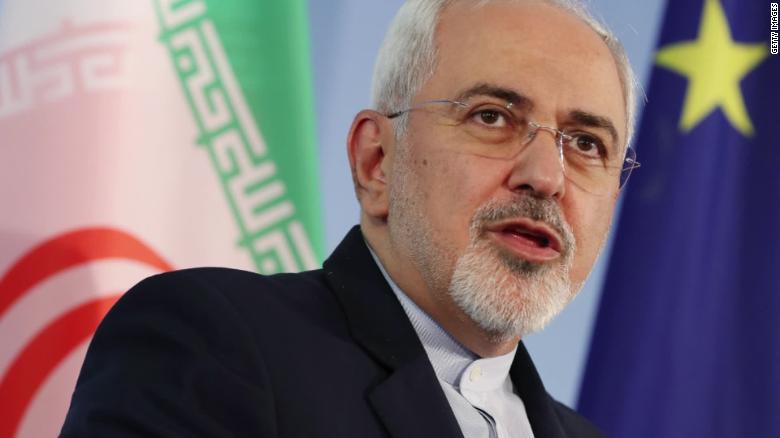 None have looked into the wider framework of the conflict between Iran and the US/West since 1953.

None have pointed out that the withdrawal from the nuclear deal, JCPOA, by the US is a violation of international law because the deal is embedded in UN Security Council Resolution 2231.

Neither has it been mentioned that Iran has accepted the most comprehensive and strict inspection regime ever and that numerous reports – also American – document that Iran has fulfilled its obligations according to the deal.

None have questioned whether it is acceptable that the Iranian people – some 80+ million – shall suffer the consequences of hard, suffocating sanctions.

None has taken up that the US applies extraterritorial sanctions on allies – i.e. that it insist on US laws being applied by others, or they will be punished.

And of course, none have mentioned that Israel – as the only country in the Middle East – is a nuclear weapons power with a comparatively much larger military budget than Iran, is not a member of the NPT (Non-Proliferation treaty) and accepts no inspections on its territory.

In summary, the media coverage of Mr. Zarif’s visit to Sweden was yet another illustration that free Western media today basically defines their freedom as a freedom to be as ignorant, selective and biased as they please – and that omission, at least as much as fake, is a huge problem for media consumers’ chances to understand international affairs.

The public were certainly not serviced in terms of relevant, fair and diverse information. Instead, other interests – such as those connected with Western dominating values and governments and, thereby, Sweden’s own pro-US foreign policy orientation – were.