New Bases to Counter China? Indo-Pacific Is New Priority Region for the US, Pentagon 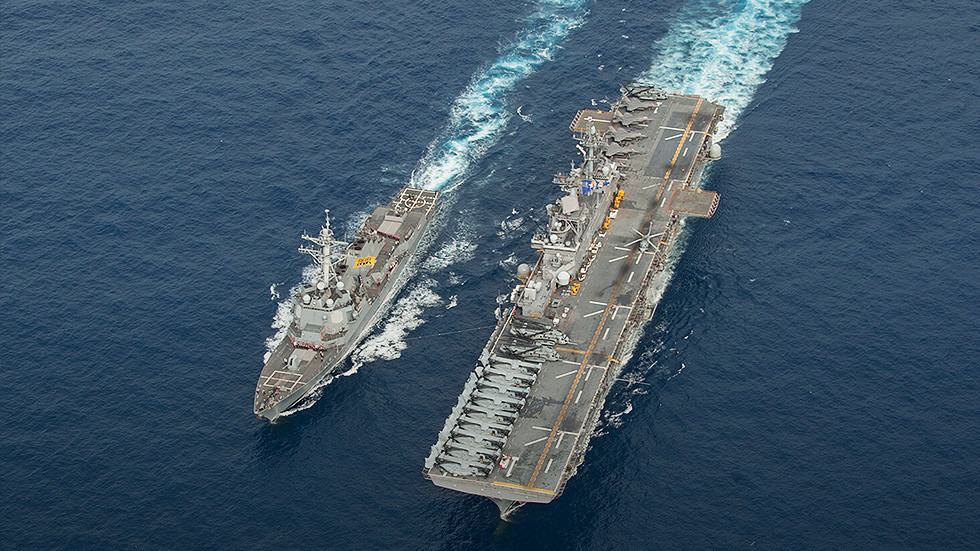 29 Aug 2019 – After devastating the Middle East through sanctions, warfare, and the backing of extremists to fight proxy wars, the Indo-Pacific region – not the Middle East – is now the Pentagon’s “priority” region.

Just this week, US Secretary of Defense Mark Esper made the call to expand base locations in the Pacific region while speaking at the Naval War College, dubbing the Indo-Pacific theatre “our priority theatre.” The remarks were clearly part of the Pentagon’s wider goal of curbing and containing China’s expanding influence throughout the region.

Esper made it evident that the US had its eye on a number of key locations in the Indo-Pacific region, in which he would be looking to invest

“more time and resources into certain regions we haven’t been to in the past.”

While it is not so apparent what those regions or locations are, there are some glaring possibilities that come to mind, including Singapore, the Philippines, Vietnam, Malaysia, Indonesia, and even some of the smaller Pacific Island nations less known to the US public such as Palau. Palau is a likely candidate, given the Western media has already applauded its “standing up to a giant” over the Taiwan question.

Read Also: Banned missile test reveals all you need to know about US foreign policy

As the Center for a New American Security’s Eric Sayers pointed out, the issue with countries such as the Philippines is that they may restrict access to its ports depending on the nature of the dispute. With smaller nations like Palau, it is likely the US would not even have to blink in order to utilise the location to combat China.

There is no doubt that the Philippines has a dog in this fight. President Rodrigo Duterte is currently in Beijing where he is meeting with Chinese leader Xi Jinping and is expected to raise their respective claims to the South China Sea as one of the major talking points.

What will be interesting to see in the coming years is where states such as Australia and New Zealand fit into this “priority theatre.”

More: What the new arms race will look like in a post-INF world

A recent report suggests that the US is in talks with the Australian government with the aim of formulating a deal that would see Canberra processing a large amount of rare earth materials required by the Pentagon. The antagonist in this particular narrative is again Beijing, who maintains somewhat of a monopoly over the production of rare earth materials which are utilised in lasers, radars, and even jet engines.

Speaking of Australia, an Australian thinktank also just recently warned that the US military is overstretched in the Indo-Pacific region and risks suffering a fait accompli loss to Beijing before it even has the chance to respond. The report says that China’s

If anyone is still wondering why the Indo-Pacific region has all of a sudden become a “priority theatre,” it should be all but clear at this stage. It’s a priority for the US because America is on the verge of being shunted out completely. Thankfully, some analysts have been warning about these developments for some time.

Then again, I am not the only person who is bringing these issues to light. In a BBC article entitled “Is the US still Asia’s only military superpower?” defence and diplomatic correspondent Jonathan Marcus concludes that “US preeminence in the Pacific is no more.” The problem, as is often the case with Western commentators on matters involving US dominance in major geopolitical affairs, is that the issue is typically framed from the perspective of “What on earth can the US do to stop China’s rise to power?”

It just happens to be that the US will probably have to face some uncomfortable truths, particularly where the Indo-Pacific is concerned. Just last month, an Australian professor of strategic studies at the Strategic and Defence Studies Centre wrote an op-ed in the Guardian which essentially conceded that Australia will have to accept a Chinese military base in the region at some point in time. Unlike Washington’s current strategy of trying (or hoping) to outmuscle China, Professor Hugh White believes that the

“costs to us of trying to keep China out of the region might simply prove impossible to bear.”

As adversarial as Washington would want its relationship with Beijing to be, there is too much evidence that the relationship between China and the rest of the world is too intertwined to expect anything but a disaster from the current road ahead. A newly released report by the think tank China Matters just concluded that if China’s economic growth only shrunk by a few percent, Australia would potentially lose $140 billion in income and more than half a million jobs.

And it could be that if Beijing opens up this conflict on too many fronts, the Indo-Pacific region will only the tip of the iceberg. As part of its Silk Road Project, Beijing has begun snagging up states in the Balkans which will only further irk Washington, and might lead the US to do something painfully catastrophic in response.

All empires come to an end. That is an indisputable aspect of our history. Whether or not all empires will continue to fall in future of course remains to be seen, but generally speaking we base all future predictions on the back of previous experiences. How far an empire wants to bring the house down in order to avoid being overtaken by a rising power is also something which we would need to account for.

The US has nukes – a lot of them – and is slowly but surely propagating the notion that they might use them. And not just in situations when a nuclear strike is necessary to defend against another nuclear strike – just because, hey, if we are going down, we will take down the rest of the planet with us.