Hisham Ahmed was born in the Deheisheh refugee camp on the outskirts of Bethlehem, Palestine in 1963.  Blind from birth, Hisham somehow surmounted all odds and ultimately earned a PhD from the University of California at Santa Barbara.  He taught for many years at Birzeit University in Palestine before coming to Saint Mary’s College of California in 2006. He died of cancer in July 2019, age 56.  The following remembrance was given at his memorial service held on 25 September 2019 at St Mary’s College. 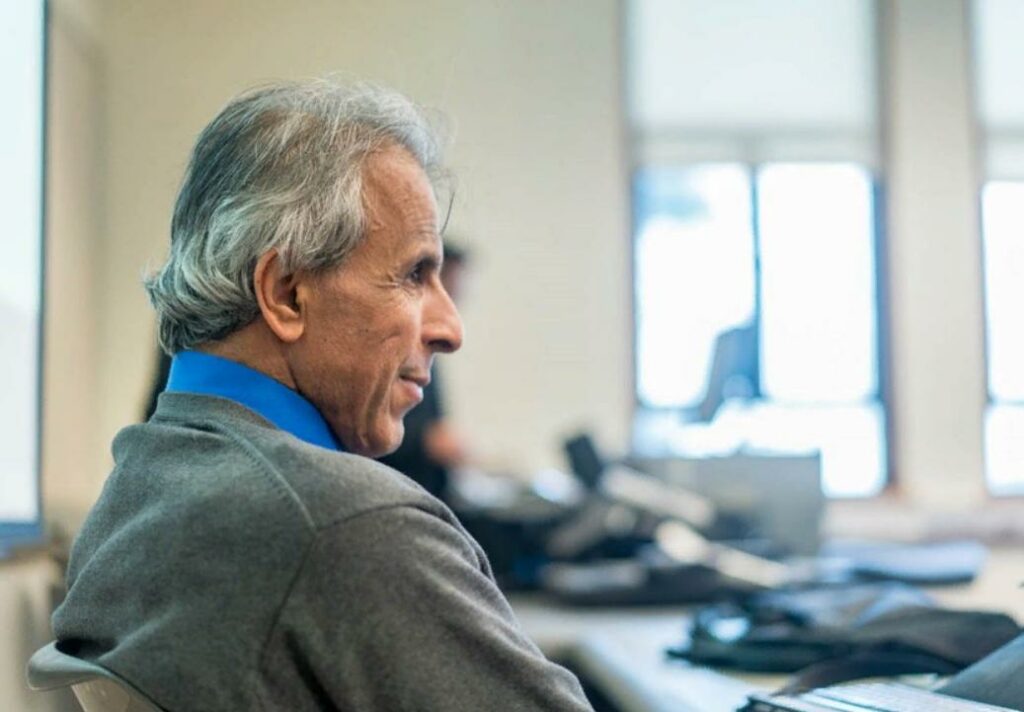 Sometimes you meet someone who is unforgettable.   Hisham Ahmed was such a person.

I recall the first time I met him. It was about twelve years ago, soon after he came to the Bay Area. He was speaking about the reality of Palestine before a big crowd. The other guest speaker was the Jewish American activist Anna Baltzer. I remember him with his braille computer, reading his prepared speech as his fingers slid across the computer which he kept by his side, supported by his shoulder strap.

That scene of Hisham with his computer and shoulder strap became very familiar. Hisham was always willing to speak at our events, never asking for anything in return. He was an important part of our community outreach and education about Palestine and the Middle East.  We were especially happy when he agreed to join the board of the Mt Diablo Peace & Justice Center.  He immediately made a mark with his positive suggestions and ideas. He was that kind of person.

Hisham was sensitive to others. In the hospital he would always ask and remember the name of different nurses and doctors. If time permitted, he would inquire about the background of a nurse or doctor.  Hisham would make some insightful comments and suddenly the staff would realize this blind person was very sharp. One of the night nurses was from Florida and was shocked and delighted to learn that Hisham had previously taught at his university there. Suddenly Hisham was not just another patient.

At the same time, Hisham stood up for himself and was unafraid to challenge authority.  Whether it was Israeli regime, the PA, or the Kaiser medical bureaucracy…. Hisham was unafraid to speak out.  And he got the attention of Kaiser; his constructive criticisms made a difference. 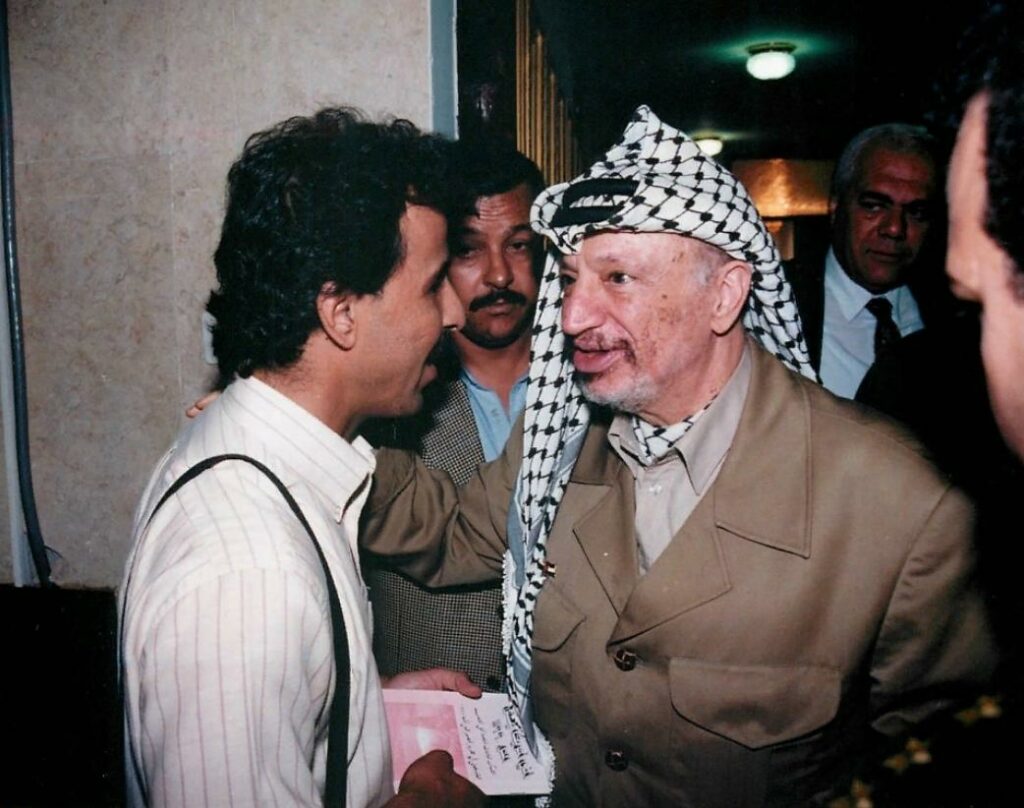 Hisham was diplomatic and full of humor.  I noticed that his academic advisor at UC Santa Barbara, from 25 years ago, recommended him highly. In addition to commenting on his academic work and achievements, the professor remarked that Hisham was……….  “a live wire”.    A live wire….. Hisham lived life to the full, bicycling dangerously around the UC Santa Barbara campus.

Two years ago we had a forum in Orinda. It was ambitiously titled “Stop the War Machine / Save the Planet”.  And we ambitiously had 16 excellent speakers. It was a terrific lineup including the lead organizer from the California Nurses Union, the former Green Party mayor of Richmond, etc.  But of course we had to strictly limit the time of each speaker. When his turn came, Hisham warmed up the audience by saying, “If you ever want to know how to punish a professor I will tell you how.  Just limit their speaking time to seven to ten minutes …” The audience loved it.   Hisham went on to deliver a sharp and prescient analysis of events. He described how Arab Spring had become Arab Hell with the destruction of Libya and war on Syria. He warned of the danger of all out war.

Hisham showed his political courage and insight when he invited Mother Agnes Mariam to speak at St Mary’s College and to meet college leaders. Mother Agnes was a Palestinian Lebanese nun who lived in Syria. She had been demonized in the media for saying the sarin gas attacks in Syria in 2013 were not done by the government. She was later proven correct by the research of Seymour Hersh, Robert Parry, Theodor Postol and others with track records of accuracy and objectivity. But at the time she was viciously attacked in western media, including by some on the so-called Left.  Those who wanted the US to intervene directly attacked Mother Agnes and threatened to disrupt her program at St Mary’s.  The opposition even threatened violence at the college.  Hisham told me there was enormous pressure to cancel the event.  But Hisham was not deterred. The program went ahead and was outstanding. 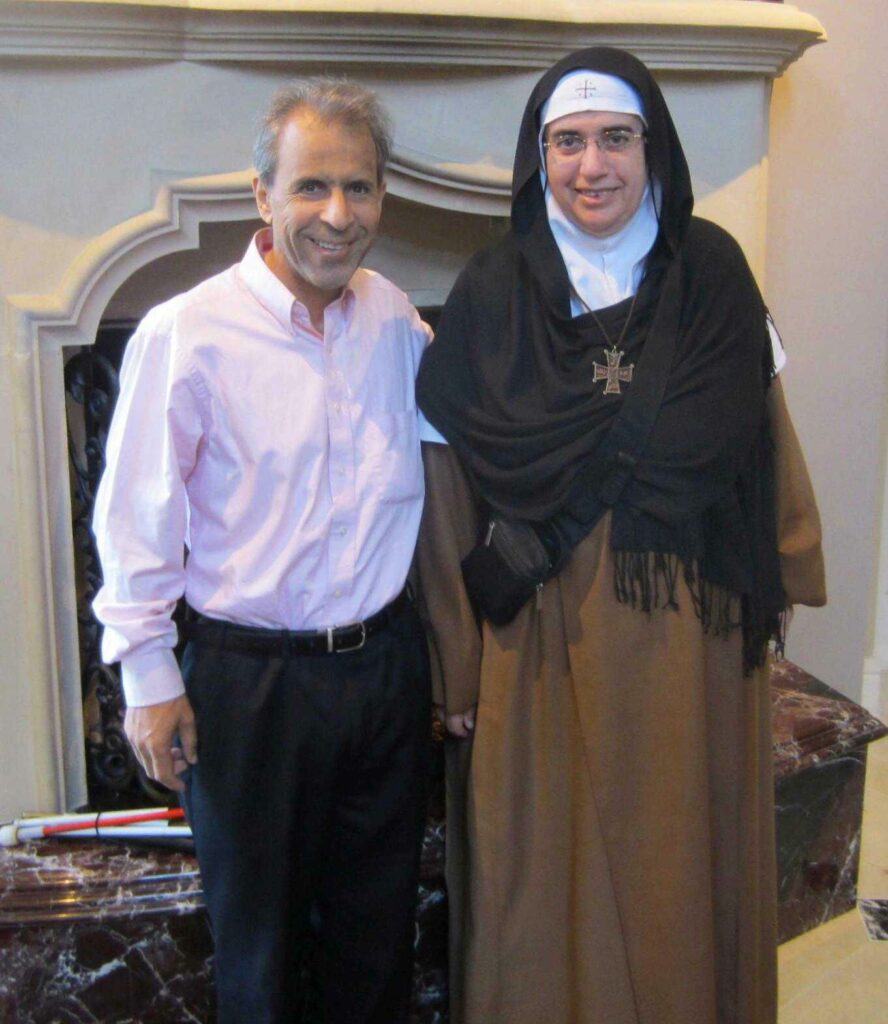 Hisham was most devoted to his family. He was always talked admiringly of his wife Amneh, how he was worried because she was doing so much. When their son Ahmed was graduating from elementary school, Hisham was in the hospital.  They did not want him to leave but he said “Hell no …. I am going to Ahmed’s graduation!”  And he did.   Later, when Hisham was home and monitoring his own health, his daughter Nour was at his side taking his blood pressure and  temperature. Hisham loved it and proudly called her Dr. Nour.

Because he was so articulate I assumed that Hisham came from the Palestinian upper class. Thus I was surprised to learn that his father was day laborer. Another surprise: Because Hisham taught at St Mary’s College and supported the Palestinian Christian Sabeel movement, I assumed he was Christian.  Thus I was surprised to hear the Muslim call to prayer playing on his cell phone when we were in the hospital at 4:30 am.  Hisham’s body rests at the Islamic cemetery in Livermore. His spirit and actions represent the best of the religion of peace and the best of all religions because Hisham did not discriminate.

My last memory of Hisham is the night before he passed away. He had arranged for his wife Amneh to have a barbecue dinner at their home.  Nancy and Wendy were there, who had helped so much.  He said we are missing Marty. I was happy that he said I was like a brother.  It was a wonderful feast and party. Hisham ate with gusto, laughing and having a good time. I think he knew it was going to be his last chance to do that. And it was.

But that is how I remember Hisham. Full of fun. Wanting other people to have fun. And living life to the maximum. He was a man of principle, resolute but fun loving, polite but strong.

In some ways, Hisham embodied the Palestinian cause:  overcoming huge challenges, resilient, proud, undaunted, steadfast. Let us do as he would want:  continue the fight for peace with justice in Palestine and beyond.

Anticopyright: Editorials and articles originated on TMS may be freely reprinted, disseminated, translated and used as background material, provided an acknowledgement and link to the source, TMS: Remembering Hisham Ahmed, is included. Thank you.