Report: Seoul International Conference on Protection of Rohingya Survivors and Accountability for Genocide 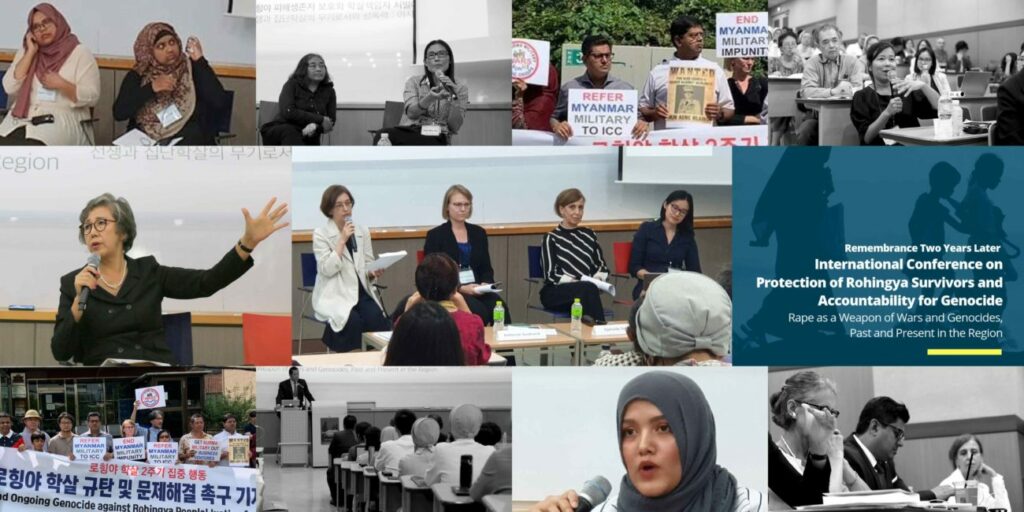 This is the region that continues to live the profound legacy of Japan’s ruthless militarism and occupation before and during the Second World War. The then unified Korea bore the brunt of Japan’s colonial rule which culminated into the genocidal fascism under PM General Togyo while China – particularly Manchuria – suffered the ‘rape of Nanking’. In those long, brutal years, Taiwan (formerly Formosa), Korea, China and the whole of what came to be known as South East Asia – so-named by the US Military – were subjected to the crimes against humanity, including summary execution, massacres, forced labour, and sexual slavery – “comfort women”. 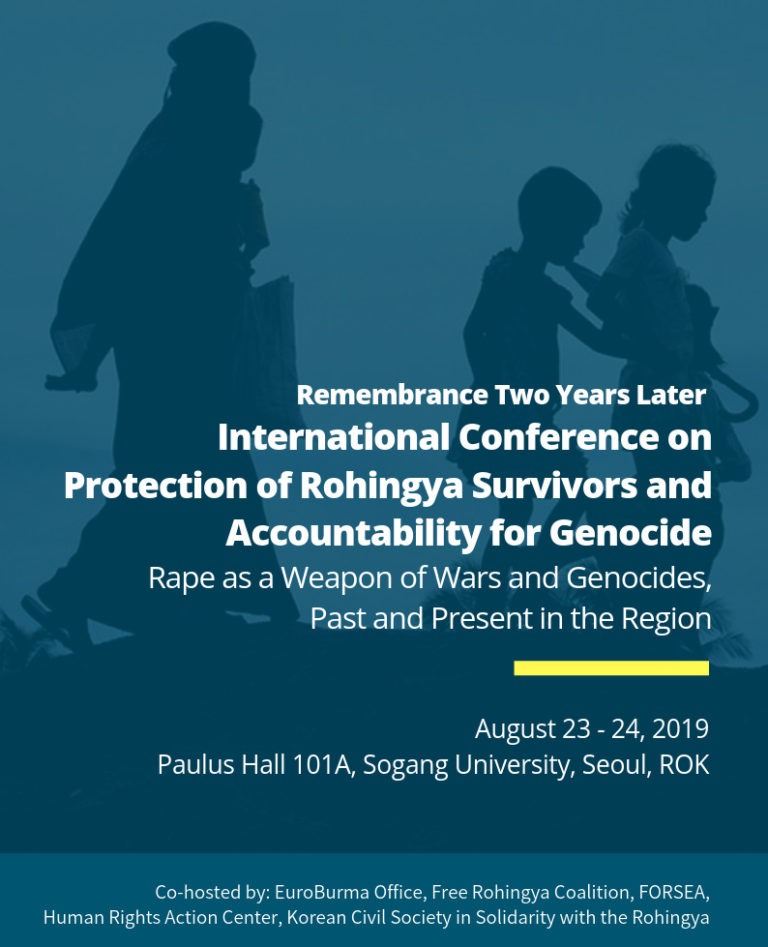 The Seoul International Conference focused on the illegal and barbaric uses of sexual violence and rape of target victim population as a matter of strategy and policy by genocidal and militaristic regimes, past and present, in Asian region, from the WWII-era Fascist Japan, Suharto’s Indonesia and General Yaya Khan’s West Pakistan in the civil war in East Pakistan (Bangladesh) to Pol Pot’s Cambodia of the late 1970’s to present-day Myanmar.

The conference attracted 150 activists, engaged scholars and experts from 12 different countries, far and near. It also enjoyed the support of Euro-Burma Office, Canada, the Internet-based umbrella network of Rohingya activists and their international friends, and the Washington-based Human Rights Action Centre led by a famed human rights leader Jack Healey.

South Korean professor and UN Special Rapporteur, Yanghee Lee, delivered an inspirational opening keynote, calling Myanmar’s policies of persecution towards Rohingyas a classic genocide. She went on to exhort activists in the audience – and on YouTube – to “call a spade a spade”. She invoked the inter-state treaty known as the Convention on the Prevention and Punishment of the Crime of Genocide. Lee rightly slammed the United Nations, particularly the Security Council in its duties to discharge its founding charter, and she exposed the unconscionable presence of Myanmar solders among the UN Peacekeepers; things that destroy the credibility of the United Nations. During the Q&A session, the UN Special Rapporteur who is known for her signature fearless straight talk, referred to a bureaucracy of dinosaurs who are incapable of learning from the organization’s past grave mistakes.

One of the most crucial features of the Seoul Conference is the large presence of and participation by woman speakers from a richly diverse national and professional backgrounds – from reputable legal scholars and practitioners from S. Korea, France, and USA to peace negotiators and peace activists from Myanmar (formerly Burma), to Korean Catholic nuns and Jesuit priests, from international relations experts, legal documenters and genocide scholars from across Asia.

It was heart-warming – and inspirational – to see the packed lecture theatre filled by S. Korean Buddhists, Rohingya Muslims, Shan, Karen, Myanmar, Singaporean, Taiwanese feminists and activists. If national states and clusters of states such as the Association of South East Asian Nations (ASEAN) are in effect operating their “policies of indifference” in the face of yet another genocide – since the Nazi Genocide which ended with the Nazis’ military defeat in 1945 – the activists and engaged scholars and experts who were gathered at Sogang University for two days were the embodiment of what is good about We the People. 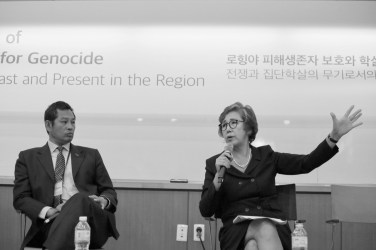 Yasmin Ullah and Nay San Lwin, the two leading Rohingya activists from the Free Rohingya Coalition, delivered powerful testimonies for their compassionate audience. They shared heart-wrenching tales of persecution, discrimination and annihilation of Rohingya by Myanmar’s “Buddhist” people and their military-civilian coalition government.

As a point of departure, the conference also played the pre-recorded messages of solidarity from 3 young Rohigya refugee men based in New Delhi delivered in Rohingya, Burmese and English calling for Rohingya diaspora and communities in Bangladesh and Myanmar to confront intra-group sexism and gender discrimination and to embrace thousands of Rohingya woman rape victims with honour and compassion. The conference also disseminated two solidarity statements prepared by the Rohingya Youth Association and Rohingya Women’s Solidarity Network – based in refugee camps in Cox’s Bazar, Bangladesh, the world’s largest civil society or pocket of Rohingyas alive today. 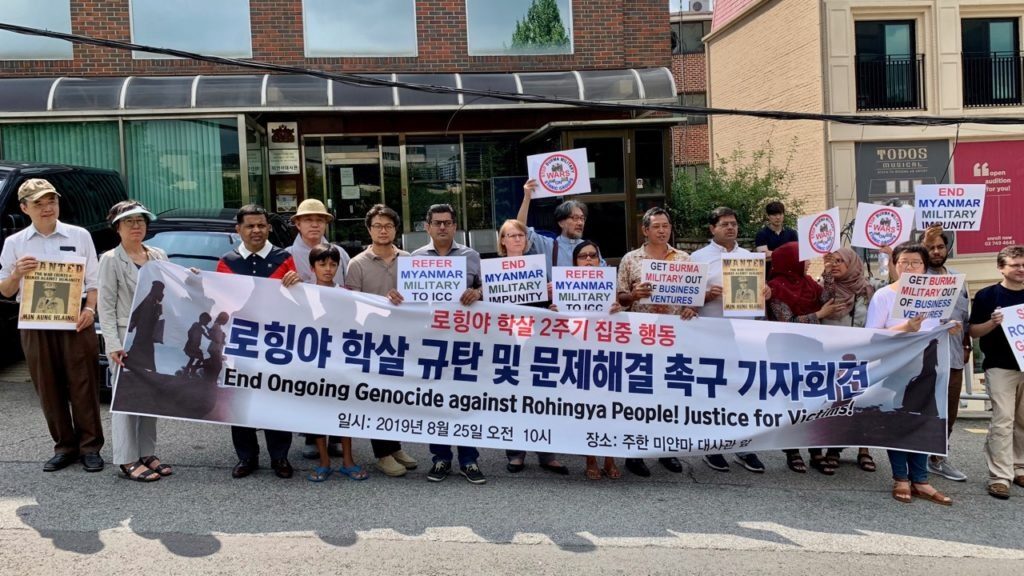 Rohingyas fully endorsed the conference call for the comprehensive boycott of Myanmar which goes beyond the current push for “targeted sanctions” and investment boycott of companies with ties to Myanmar military.

The Seoul Conference also highlighted the continuing issue of Japan’s refusal to acknowledge, apologize and compensate for the women whom Japan’s Imperial Army forced into sexual slavery – known as “Comfort Women”. The crimes committed some 70 years ago continue to haunt present-day Japan, having triggered the escalating diplomatic row and trade war between Seoul and Tokyo. Lending their moral and intellectual support – both to the Korean civil society and Rohingya victims of Myanmar’s genocidal rape by command, the two leaders of Taipei Women;s Rescue Foundation namely Professor Theresa Der-Lan Yeh and Ansel shared their work in rehabilitating Taiwanese victims of sexual slavery during Japanese Fascist occupation.

Father Pak Sanghun of Jesuit Research Center for Advocacy and Solidarity not only delivered an eloquent message on the first day but he also opened the protest rally in front of Myanmar Embassy in Seoul, designed to coincide with the Genocide Remembrance Day commemoration attended by some 200,000 Rohingya survivors in Bangladesh’s sprawling and squalid refugee camps.

The conference also heard from Mr Thet Swe Win, the anti-racist resister and leader of the White Rose campaign – named after the short-lived but deeply inspirational anti-Nazi White Rose group in the Hitler’s stronghold of Munich: Thet talked about how Myanmar military and racist Buddhist organizations work hand in glove in his native country. Dr James Gomez of Asia Center shared his research finding from the comprehensive mapping of the spread of hate and racism across South East Asia.

One of the most technically challenging but very educational session was populated by legal scholars and international human rights law practitioners Katherine Southwick who formerly was with the Prosecution’s Office at the International Criminal Tribunal on Yugoslavia, Doreen Chen who served as the chief international legal counsel at the Khmer Rouge Tribunal and the Algerian American lawyer Ddjaouida Siac. Their strategic conclusion: the International Court of Justice, which can adjudicate disputes among UN member states, has the potential to deliver justice for Rohingya people. That is, if any state and any coalition of states chose to discharge its (their) legal obligation to invoke the Genocide Convention in order to intervene in ending Myanmar’s ongoing genocide and to seek reparation and restitutions on behalf of Rohingya survivors.

Finally, the co-organizers, Kinam Kim of Asian Dignity Initiative of S. Korea and Dr Maung Zarni of FORSEA.co wrapped up their takes on the Seoul Conference while the Korean Civil Society organizations offered their pledges and solidarity to Rohingya people. The conference resolved to launch the Asia-wide cultural, sports, tourism and consumers’ boycott of Myanmar. In the words of FORSEA’s General Secretary, when the international governments and the UN are failing yet another group of genocide victims it is incumbent upon.

We the People of the World – and the people of Asia, in the case of another Asian genocide – to band together and intervene to end the ongoing genocide.

FORSEA will continue to help build a strong Asia-wide grassroots movement in solidarity with Rohingyas. And the activists at the Seoul Conference are already planning to confront the vital subject of Business, Human Rights Violations and Genocide in Myanmar and Southeast Asia. Watch this space.

Korean TV report (in English) on war crimes and Genocide in Burma: