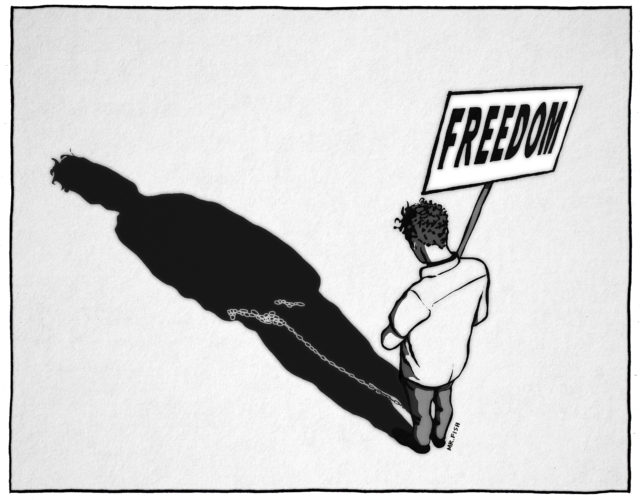 23 Sep 2019 – Friday’s [20 Sep] climate strike by students across the globe will have no more impact than the mass mobilizations by women following the election of Donald Trump or the hundreds of thousands of protesters who took to the streets to denounce the Iraq War. This does not mean these protests should not have taken place. They should have. But such demonstrations need to be grounded in the bitter reality that in the corridors of power we do not count. If we lived in a democracy, which we do not, our aspirations, rights and demands, especially the demand that we confront the climate emergency, would have an impact. We would be able to vote representatives into power in government to carry out change. We would be able to demand environmental justice from the courts. We would be able to divert resources to the elimination of carbon emissions.

Voting, lobbying, petitioning and protesting to induce the ruling elites to respond rationally to the climate catastrophe have proved no more effective than scrofula victims’ appeals to Henry VIII to cure them with a royal touch. The familiar tactics employed over the past few decades by environmentalists have been spectacular failures. In 1900 the burning of fossil fuel—mostly coal—produced about 2 billion tons of carbon dioxide a year. That number had risen threefold by 1950. Today the level is 20 times higher than the 1900 figure. During the last decade the increase in CO2 was 100 to 200 times faster than what the earth experienced during the transition from the last ice age. On May 11 the Mauna Loa Observatory in Hawaii recorded 415.26 parts per million of CO2 in the air. It’s believed to be the highest concentration since humans evolved. We will embrace a new paradigm for resistance or die.

The ruling elites and the corporations they serve are the principal obstacles to change. They cannot be reformed. And this means revolution, which is what Extinction Rebellion seeks in calling for an “international rebellion” on Oct. 7, when it will attempt to shut down city centers around the globe in acts of sustained, mass civil disobedience. Power has to be transferred into our hands. And since the elites won’t give up power willingly, we will have to take it through nonviolent action.

Protests can be the beginning of political consciousness. But they can also be empty political theater. They can be used to celebrate our moral probity—advertisements, especially in the age of social media, for ourselves. They can be a boutique activism in which protesters allow themselves to be funneled through police barricades and arrests are politely choreographed, resulting in a few hours in jail and the credentialing of the demonstrators as radicals. They can be used to distance ourselves from a repugnant political figure such as Donald Trump, while leaving us silent and complicit when the same policies are carried out by a supposed progressive such as Barack Obama. This is a game the state has learned to play to its advantage. As long as we do not disrupt the machine, as long as we protest according to their rules, the elites will let us march through the streets of Washington in pussy hats or walk out of school for a day.

When power is threatened, as it was in the sustained protests during the Occupy encampments and at Standing Rock, the ruling elites react very differently. They employ the full weight of the surveillance state to demonize the protesters, arrest and detain the leadership and infiltrate agents provocateurs to carry out violent assaults to justify the use of the police and security forces to shut the protests down.

Preemptive efforts by the security forces to harass and thwart Extinction Rebellion’s planned October occupation of city centers, an action designed to negatively affect commerce and bring parts of major cities to a standstill, have already begun. Roger Hallam, the co-founder of Extinction Rebellion, was arrested Sept. 14 and charged with attempting to cause a disruption at Heathrow Airport by using a drone. Hallam has called Heathrow—which climate activists say emits 18 million tons of carbon dioxide a year, more than the total emissions of 118 countries—“a crime against humanity.” He and other activists have vowed to halt the airport’s plans to build a third runway. Hallam’s case will be heard at the Isleworth Crown Court on Oct. 14, meaning he will not be released until after the Oct. 7 protests. In addition, other Extinction Rebellion organizers, including Andrew Medhurst, have been arrested in England, and police have seized their phones and computers.

It does not matter who is the public face of the corporate state. This is not about political personalities. It was Obama, after all, who oversaw a coordinated national effort to eradicate the Occupy encampments and place the water protectors at Standing Rock under siege. Obama’s environmental policies, despite his lip service to curbing global warming and his support of the nonbinding Paris climate accord—which the climate scientist James Hansen called a fraud—were appalling. U.S. oil production rose every year he was in office, an increase of 88%. It was the largest domestic increase in oil production in American history. Obama opened offshore drilling to American oil companies as if he were Sarah Palin. “American energy production, you wouldn’t always know it, but it went up every year I was president,” Obama told an audience at Rice University last year. “And you know that … suddenly America’s like the biggest oil producer … that was me, people.”

Democrats, like Republicans, serve corporate power. They will not end government subsidies for the fossil fuel industry and the extraction industries. They will not impose carbon taxes to keep fossil fuels in the ground. They will not limit overconsumption. The technologies they invest in—fracking, hybrid cars, genetically modified food—are designed to maintain or expand consumption levels, not reduce them. They will not redirect the trillions of dollars and scientific and technical expertise from the military and corporations toward saving us from environmental catastrophe. The rhetoric and gimmicks they use to placate the public, from carbon credits to wind turbines and solar panels, are, as the scientist James Lovelock says, the equivalent of 18th-century doctors attempting to cure serious diseases with leeches and mercury.

The creation of ever more complex bureaucratic and technocratic systems in an age of diminishing resources is a characteristic of dying civilizations. Civilizations in their final phase frantically search for new methods of exploitation rather than adapt to a changing environment. They repress and exploit the lower classes with greater and greater ruthlessness to maintain the insatiable appetites among the elites for power, luxury and hedonism. The worse things get, the more the elites retreat into their private enclaves. The more out of touch the elites become, the more catastrophe is assured. This self-defeating process degrades the ecosystem until catastrophic systems collapse.

The ruling elites, trained in business schools and managerial programs, are not equipped to confront the existential problems caused by climate catastrophe. They are trained to maintain, no matter the cost, the systems of global capitalism. They are systems managers. They lack the intellectual capacity and imagination to search for solutions outside the narrow parameters of global capitalism.

Those living in the global south are already suffering and dying from the effects of global warming, for which the wealthy industrialized nations of the global north bear most of the responsibility. The richest 0.54%, or 42 million people across the world, are responsible for more emissions than the poorest half of the global population, or 3.8 billion people. These elites are sacrificing the poorest on the planet first as they work up the social and economic hierarchy to extinguish us all.

We have to let go of our relentless positivism, our absurd mania for hope, our naive belief that with grit and determination we can solve all problems. We have to face the bleakness before us. We live in a world already heavily damaged by global warming, which will inevitably get worse. Refusal to participate in the further destruction of the planet means a rupture with traditional politics. It means noncooperation with authority. It means defying in every nonviolent way possible consumer capitalism, militarism and imperialism. It means adjusting our lifestyle, including becoming vegans, to thwart the forces bent upon our annihilation. And it means waves of sustained civil disobedience until the machine is broken.

The biosphere, including the Amazon rainforest, the oceans and the polar ice caps, is visibly deteriorating. Heat waves are crippling Europe, Australia and the American Southwest. Floods devastate the Midwest. Last week, southeast Texas suffered heavy flooding and deaths when it was hit by the seventh-wettest tropical cyclone in U.S. history, with some areas receiving more than 40 inches of rainfall within three days. Monster hurricanes ravage the Caribbean and the shores of the United States. Wildfires consume the forests of the West Coast. But despite the tangible signs of a climate emergency, the elites continue to assure us we can live as we have always lived.

The mathematical models for the future of the planet have three devastating trajectories: a massive die-off of perhaps 70 percent of the human population and then an uneasy stabilization; extinction of humans and most other species; an immediate and radical reconfiguration of human society to protect the biosphere and make it more diverse and productive. This third scenario, which most scientists admit is unlikely, is dependent on a halt to the production and consumption of fossil fuels, converting to a plant-based diet to destroy the animal agriculture industry—almost as large a contributor to greenhouse gases as the fossil fuel industry—and greening the deserts and restoring rainforests. We know what we have to do if our children are to have a future. The only question left is how do we empower leaders who will save us.

Climate scientists warn that we will soon reach a tipping point when the biosphere becomes so degraded no effort to save the ecosystem will halt runaway climate change. We may already be there. The tipping point, many believe, is a further increase in global temperatures of 2 degrees Celsius. At that point “feedback loops” will see environmental catastrophes exacerbate each other.

We must embrace a new radicalism. We must carry out sustained civil disobedience to disrupt the machinery of exploitation, even as we prepare for the inevitable dislocations and catastrophes ahead. We must alter our lifestyles and consumption to cut our personal carbon footprints. And we must organize to replace existing structures of power with ones capable of coping with the crisis before us.

One Response to “Saving the Planet Means Overthrowing the Ruling Elites”