25 Sep 2019 – Look at this CNN online FrontPage in the evening of September 24, 2019. It may well come to be seen in the future as an indicator of the beginning of the end. 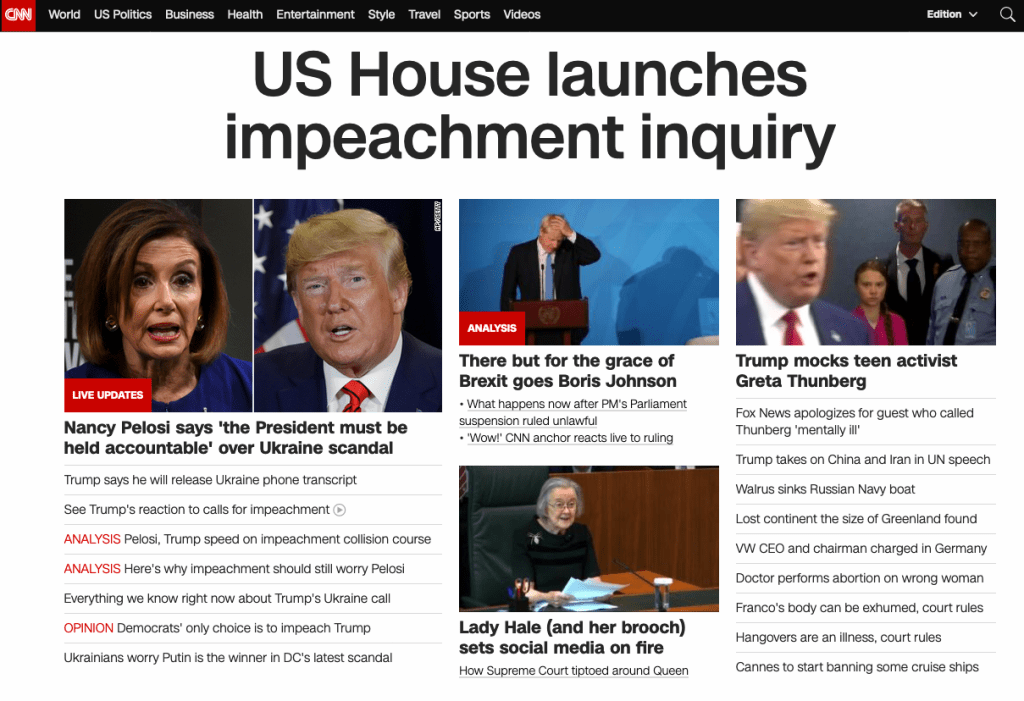 Earlier that same day, Britain’s highest court ruled PM Boris Johnson’s suspension of Parliament unlawful and in the evening, the US House launched an impeachment inquiry against President Trump.

These are huge matters. They are not momentary crises.

It is entire systems approaching existential breakdown – and not because of foreign adversaries but because of their own morally corrupt actions and policies – or system fatique: systems so worn out and tired (of itself, too) that they don’t have the energy needed for re-vitalization.

The two most important Western leading societies in contemporary history – a former Empire and the present one – increasingly look like failed states, failed societies, and failing their own ideals and laws.

What we see is a decay of morals, an erosion of democracy and a downward spiraling chaos with an end but no solution in sight.

We see two leaders with dangerous narcissistic traits who are increasingly cornered and who have at their disposal enough nuclear weapons to destroy the world – destroy humanity – many times over. Two leaders who surely believe that their button is larger than anybody else’s.

Their personal ethical standards are clearly below the acceptable for elected leaders with great responsibilities. Telling lies, deceiving, antagonizing, ridiculing, threatening, playing hurt, etc. are main tools in their tool boxes. Further, tendential megalomania (“I can get away with everything because I am who I am”) as well as psycho-political projection of their own dark sides on others is obvious.

What should one think of the way Mr Trump handled the speech at the UN by environmental activist Greta Thunberg and how he needs to mock her and, thereby, the issues she speaks about?

What could personalities like Trump and Johnson be willing to do if and when they see that the game – their incredible, unconstitutional and arrogant game – is over?

The speculative parallel isn’t direct, or perfect, but one may anyhow ask oneself: What could we imagine that Hitler would have done there in the last hours in his bunker in Berlin had he had access to nuclear weapons?

The Soviet Union’s empire dissolved with nuclear weapons. But its last leader, Mikhail Gorbachev, was an intelligent, wise, visionary and moral last man. Neither Trump nor Johnson is.

How come democracies have decayed to the extent that humanity’s fate can be decided by such kakistocratic people (kakistocracy = a system of government which is run by the worst, least qualified, or most unscrupulous citizens)?

These years, the talk is of two major civilizational crises. The first is spoken comparatively much of, climate change or better, environmental collapse. The other – the risk of major war, including nuclear war by politics, human or technical failure – is spoken woefully little about.

The third global crisis is seldom considered on par with, or related to, the first two, namely everything pertaining to democracy: the lack of vision, leadership, genuine democracy, people’s empowerment and trustworthy media as well as the decay into increasing authoritarianism particularly in the West.

The West has no Mikhail Gorbachev to oversee the dissolution of an entire system. Not one even close to his caliber – a caliber lesser minds such as Bill Clinton chose to not work but lie to, cheat and humiliate back then.

Rather, there are too many intellectual and moral dwarfs – shortsighted and immature – among Western leaders. And those of the EU have failed miserably in developing an alternative to the US, if they ever tried. If you can’t do that in these times, you never will.

The Rest of the world needs somebody decent to talk with in the West. But what’s their phone number to paraphrase Kissinger? One, Angela Merkel, has lost because she was decent.

Take the two main 2015 cases. First, of the nuclear deal (JCPOA) with Iran and the continuation of the sanctions. The EU has not been able to stand up and honour its commitments but have, cowardly and submissively, obeyed US demand/threats to accept US law also on their own sovereign territory – the so-called secondary sanctions.

Secondly, take the miserable handling of 1,5 million asylum seekers in late 2015, the proportionally small burden of whom could not be shared among the 29 EU countries’ 410 million citizens. They were suffering people the far majority of whom came from countries destroyed by the West itself.

Those to dots are never connected because someone wants wars and intervention and self-aggrandizement to continue no matter how self-destructive and counter-productuve it evidently is (producing also more terrorists). 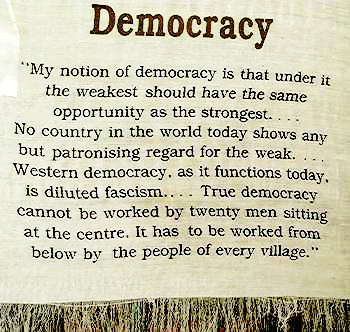 The new better world being born out of this crisis

The West’s decline and decay is Western, it does not mean that the whole world is in decline. But Western media, politics and much security and international relations research is extremely navel-gazing and lacks macro perspective in time and space. As people sitting inside boxes tend to.

Fortunately, however, it’s simple sociological dialectics that something new is being born out of the old that dies. While some go down, others go up.

Thus, there is reason for hope if you look at all humankind. But – yes! – may the Western “leadership” through the US Empire soon be over. And may it be over with a whimper rather than with a bang.

A new world is taking shape. The West, of course, is in denial because it won’t be a world in which it dominates.

The West has become a grumpy old and bitter man. When did you last hear something benign, constructive and visionary come out of a mouth in Washington? No, it’s threats, wars, demonisation, intimidations, sanctions, withdrawal, paranoid siege mentality, wall-building and militarism. Without end.

It’s power games, personality fights; it’s muddling through, intriguing, damage limitation and crisis (mis)management. How many seconds a day do you think Mr Trump or Mr Johnson has to discuss the long-term future, to shape policies, to listen – truly listen – to advisers, read a book or think through alternatives.

The Titanic crew also didn’t talk about changing course. If you think they did, listen to President Trump’s speech at the UN also on September 24. His worldviews are outdated, to put it diplomatically. And there are enemies all around. Only enemies. Bad guys in contrast to his good, great God’s own country.

The future world is one in which the West will either be one among many partners or become what is usually called “underdeveloped” – a Museum of the West’s militarist hubris, exceptionalism and visionless fake democracy. (See Gandhi’s prophetic words above about Western democracy being diluted fascism).

If you are Number 34 in a ranking order, you have 33 to look up to and learn from. If you are Number 1 (or believe you are), you learn from no one, you stop listening and you master, teach, threaten. And kill because – well, might is right.

In the global classroom, the West continues to teach, threaten and grade the Rest, unable to see and understand why the pupils are leaving. It’s no longer the role model and its teachings have less and less relevance for the better, future world being born.

All Empires fall. The US Empire will too.

Look at its second-to-none warfare, militarism and killing machine, its domestic poverty, it globally weakening economic influence, its overreach and declining management capacity, its lack of legitimacy (not to speak of the absence of admiration) in the eyes of the world’s people. Look at its failed vision and lack of new ideas, its increasing reliance on one power scale – the military, its addiction to violence – from the single revolver to nuclear weapons.

Does anybody really believe that such a system is sustainable over time and is the right role model – leader – of the Rest? If so, the reality check is closing in.

And no new Empire will appear.

No one is that crazy to believe it is their mission to rule the future humanity of billions of people according to one set of ideals and do so by the use of a Bible and a Sword.

The Occident has become an Accident. To itself and to the Rest.