The Lion and the Three Bulls

There is fable attributed to Aesop and others about three bulls and the lion. While there are variations to the story, the moral remains the same.

The lion comes to the Red and black bull and says: You are in danger; the white bull stands out and can attract predators which can endanger you, so let me eliminate him. They agreed.

A few weeks later he goes to the black bull and gives him the same speech about the danger of the red bull. A while later he comes for the black bull saying it is your turn. The black bull lamenting his fate says: “I was eaten the day the white bull was eaten.”

This story comes to mind as I consider the fates of Russia, China, Venezuela, Iran, and even France and England. Let me explain. 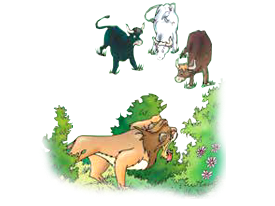 After the destruction of Second World War, a new world order emerged with a “United Nations” created by the winners of that war and in particular the five great powers (USA, USSR, China, UK, and France). They modeled the UN so that the great power determine the future of the world (hence they held veto power in the UN Security Council).

Thus no implementation of any regulation or law on the ground could be carried out unless the five powers concur. The US had an edge over other four countries simply because it had been left largely unscathed from the war and its economy boomed in the 1950s. The US corporations grew to dominate the world and become the dominant economic power.

But there was another reason that this economic dominance happened: nationalism. Most other countries knew they could not let another country dominate other than the US (a country of immigrants to begin with). It was a kind of least bad option to rely on the US currency as a global currency. It was also because the US pegged its dollar to having gold to back it up.

But in the 1970s the US administration dropped the part of the agreement that dealt with gold and basically gave itself the right to print as much money as it wanted “backed by the Faith and credit of the US government” not by the gold. The US thus printed trillions and trillions and went into trade and government deficits that now racked up over $21 trillion in government debt and uncounted trillions more in corporate and private debt.

Meanwhile, the rich got richer (and the poor poorer) around the world but especially in the US. To ensure the economic hegemony, a military hegemony was essential and so the US now spends more on its military than on anything else and more than the next 12 countries combined.

The key agents of economic and military hegemony in the US were military/industrial complex and Zionist interests (and there is big overlap of the two). As the strength of the Zionist lobby grew exponentially after 1967, there were fewer and fewer incidents where if the two interests collided, the imperialist (military/industrial complex lobby) was able to defeat the Israel lobby. Examples of loss of the Israel lobby against that would need to be looked at in earlier periods like the 1950s and 1960s.

There are examples especially after the collapse of the Soviet Union when even the powerful military and oil industry lobbies failed against the Israel lobby. For example, when George Bush and his secretary of state James Baker and their military chiefs (oil and military men) backed down in 1991 in the face of the Israel lobby (and publicly said they are backing out because of that). This dramatic and very unusual situation where a minority of extremists bent on colonialism in Palestine (7.5 million of us Palestinians are refugees or displaced people) and formation of an racist apartheid “Jewish state” stand against other Jews calling for human rights and manage to make subservient the strongest country on earth. But what had happened is even worse.

The US foreign policy has moved in the past 30 years from a pretense of “international order” backed by the US veto at the UNSC to a racketeering system. The US thus changed from “policing” the world (US forces in >100 countries) to a racketeer gangster of the world.

They even brag about it: Madeline Albright said removing Saddam Hussein was indeed worth the half a million Iraqi Children deaths, Hilary Clinton laughed about how they took over Libya killing Gaddafi, and Donald Trump bragged about how he blackmails the kings of the oil rich countries. Now it is naked force and no pretense even of bringing allies on board.

Thus the US withdraws from signed climate change agreements, weapons agreements and even the US/UN/Russia/EU signed agreement with Iran. All to serve the American corporations and to serve Zionist interests in Palestine.

That many country leaders shake their heads and hope that the mad gangsters in Washington and Tel Aviv do not go after them next is interesting. But they should contemplate the fate of the black bull.

For more on the subject of the lobby and whether the dog wags the tail or the tail wags the dog, see http://qumsiyeh.org/connectingthedotsiraqpalestine/

One Response to “The Lion and the Three Bulls”