19 Sep 2019 – British class justice was on full display last Friday [13 Sep], as WikiLeaks founder Julian Assange was detained indefinitely at Belmarsh prison, beyond the completion of his sentence, while fascist leader Tommy Robinson was released 10 weeks early from the same jail.

With the stark contrast in the fate of the two, the ruling class is sending a clear message: Whistleblowers who expose government crimes will be hounded and persecuted, but fascists who incite anti-Muslim hatred and violence against immigrants and socialists can be assured kid gloves treatment. 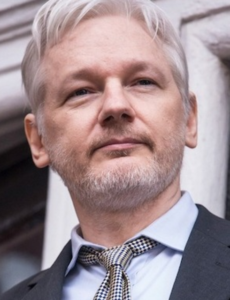 Assange has suffered worsening forms of arbitrary detention for nearly nine years and is facing, if extradited, a US sentence of 175 years under the Espionage Act. His health is deteriorating rapidly. United Nations Special Rapporteur on Torture Nils Melzer warned after visiting him in May that Assange was showing symptoms of “psychological torture, including extreme stress, chronic anxiety and intense psychological trauma.”

Assange’s only “offence” is years of investigative journalistic work in which he has exposed government corruption, complicity in human rights abuses, and war crimes.

Robinson, in contrast, was imprisoned for a crime that he committed in line with his anti-democratic and fascist outlook. He was arrested in May 2018 for “aggressively confronting and filming” defendants at a child-grooming trial at Leeds Crown Court. He defied temporary court reporting restrictions to livestream a fascistic rant against “Muslim paedophiles” and “Muslim rapists” while the jury was considering its verdict.

His actions risked collapsing a serious rape trial and were an attack on the democratic right to the presumption of innocence. His intention was to incite anti-Muslim hatred—promoting, in the words of the court, “vigilante justice.”

Yet while Assange received almost a year’s jail time—near the maximum sentence—for a minor bail offence, Robinson was sentenced to just nine months out of a potential maximum of two years. In the end, he spent just nine weeks in prison, and in relative comfort.

According to far-right news site Rebel Media ’s Ezra Levant, Robinson had a “suite of cells to himself including showers and exercise rooms,” having been kept separate from other prisoners for the duration of his imprisonment. He was also able to receive visitors three or four times a week and to make unlimited calls between 9 a.m. and 11 a.m. each morning.

Levant reported that “the governor of the prison, the warden as we call it in North America, actually visits him every day even, just for a moment just to say ‘how’s it going.’” Robinson has explained since being released that after he made a special request to the governor, staff came into the prison early twice a week to escort him to the prison gym.

The stark contrast between the two cases does not end there. Since being illegally dragged out of the Ecuadorian embassy, where he had been granted UN-backed diplomatic asylum, Assange has been railroaded through the courts in a series of sham half-hour sessions in front of prejudiced judges. The judge at Assange’s first bail hearing, Deborah Taylor, falsely referred to Assange facing “rape” and “sexual abuse” “charges” in Sweden. Assange corrected her that no charges have ever been brought against him in Sweden for anything. The judge who found Assange guilty of a bail infringement, Michael Snow, attacked him as a “narcissist”

The judge selected to preside over Assange’s US extradition hearings, Emma Arbuthnot, refuses to recuse herself from the case when there are flagrant conflicts of interest. Her husband, James Norwich Arbuthnot, is a Conservative member of the House of Lords and intimately connected with the British armed forces and security services—whose criminal operations were exposed by WikiLeaks.

While imprisoned, Assange’s ability to prepare his legal case has been severely and deliberately impeded—not least by the ill health caused by his cruel treatment.

But Robinson has been afforded every legal courtesy and protection. He was released from an original 13-month sentence handed to him in May 2018 after only two months in prison, following an appeal. The appellate judges ruled that Robinson had been sentenced too soon after his arrest and that the original judge had failed to clearly set out the basis for his contempt ruling. These concerns were enough to grant him another three months of freedom to pursue his far-right campaigning.

The fascist leader gained another, still unexplained, reprieve during his retrial in October 2018. After Robinson sent a private note to Judge Nicholas Hilliard, the case was suddenly referred to the attorney general, with Hilliard declaring that “all the evidence must be rigorously tested.” The attorney general set the date for a new trial at the end of March 2019, leaving Robinson free to go for another five months.

The March date was delayed again on the request of Robinson’s lawyers, who asked for more time to prepare his defence. He was eventually given a 9-month sentence on July 5—reduced from the original 13 months given in May 2018. Taking into account time spent in prison for the same offence last year, this meant jail time of just of 19 weeks, of which Robinson has served half.

Throughout these events, Robinson, the founder of the fascist English Defence League and former British National Party member, has been guaranteed a battery of media cameras and microphones hanging on his every word.

As a result, Robinson’s court case was transformed into a financially and politically lucrative publicity campaign. During his series of court cases, Robinson claimed to have received upwards of £350,000 in donations, at least £47,000 of which came from the right-wing Middle East Forum in the United States. Trump’s former fascist advisor Steve Bannon referred to Robinson as “the backbone of this country [the UK]” in an interview with LBC radio.

Buoyed by official support, Robinson’s supporters organised a far-right rampage through the central streets of Manchester at the end of July. The fascists marched through the city and held an unprecedented rally, without hindrance from the authorities, inside a privately owned shopping centre. They then swarmed into one of the city’s main public squares where they trashed the stall of a left-wing organisation, the Revolutionary Communist Group, in the presence of police who didn’t lift a finger.

By contrast, Assange’s case, including protests and rallies to defend him, have been subjected to a total media blackout. This month, a special performance of “Wish You Were Here” by world-famous songwriter Roger Waters in tribute to Assange—performed outside the Home Office in London to a crowd of a 1,000 people—was not reported on by a single mainstream newspaper or broadcaster.

The polar opposite treatment of Assange and Robinson underscores the bogus character of attempts by the far right to equate the two. After leaving prison, Robinson wrote on his Telegram blog, “As I lay in bed early on this Sunday night all I can think is FREE JULIAN ASSANGE.” This is a transparent attempt to give his filthy politics some credibility by associating himself with WikiLeaks’s heroic work—on the spurious basis that he and Assange are both persecuted journalists.

There is no comparison. Robinson is not a “truth teller” or a free speech martyr, as his supporters claim. He is a fascist poster boy who uses “freedom of speech” to incite racist violence.

In the course of his “journalism” for Rebel Media, Robinson has referred to Islam as “a backward, barbarian, medieval, molesting culture” and to “British Muslims” as “enemy combatants who want to kill you, maim you, and destroy you.” He has claimed that Britain is suffering a “rape jihad,” that “thousands” of Muslim men in Rotherham engaged in the child abuse of “thousands” of children, and defended the chant “Muslim paedos off our streets.” Robinson calls on the West to respond and “take their gloves off and start really tackling what the problem is, which is Islam.” “We must unite to protect the civilisation that we love, before it’s too late.”

Robinson carries out his fascist campaigning in close parallel with the most right-wing forces within the official political set-up of the same state that seeks to destroy Julian Assange.

Just a few days before his release, Robinson’s Telegram channel declared, “21 Tory traitors decided to side with [Labour leader Jeremy] Corbyn and the Labour traitors and try and block the Brexit that the majority of people voted for. … We back [British Prime Minister] Boris [Johnson].” This is the same Johnson who as mayor of London until May 2016 oversaw a multimillion-pound operation to surround the Ecuadorian Embassy with police tasked with arresting Assange if he ever stepped outside.

In April, as then front-runner for the Conservative Party leadership, Johnson responded to Assange being brutally dragged out of the Ecuadorian embassy by a police snatch squad by tweeting, “It’s only right that Julian Assange finally faces justice. Credit to @foreignoffice officials who have worked tirelessly to secure this outcome.”