Western Media Portrays Hong Kong Hooligans as Heroes. But Are They?

Whenever Hong Kong protesters are destroying public property, there are no cameras of Western media outlets in sight. But when police decide to intervene, protecting their city, Western media crusaders emerge in full force. 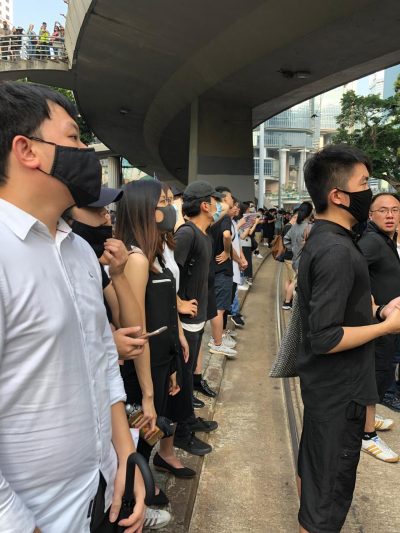 11 Sep 2019 – On Sunday [8 Sep], huge US flags were waving in the air. A massive demonstration, consisting of mainly young people, was moving up from the old British-built downtown area of the city towards the US Consulate General, often erroneously called the “embassy.”

The temperature was well over 30 degrees Celsius, but the number of ‘protesters’ kept growing. Many of the main arteries in Hong Kong were entirely blocked.

Western media were there in full force, wearing yellow fluorescent vests, their ‘Press’ insignia, helmets and masks. They mingled with the crowd, filming US flags, clearly enjoying the show. 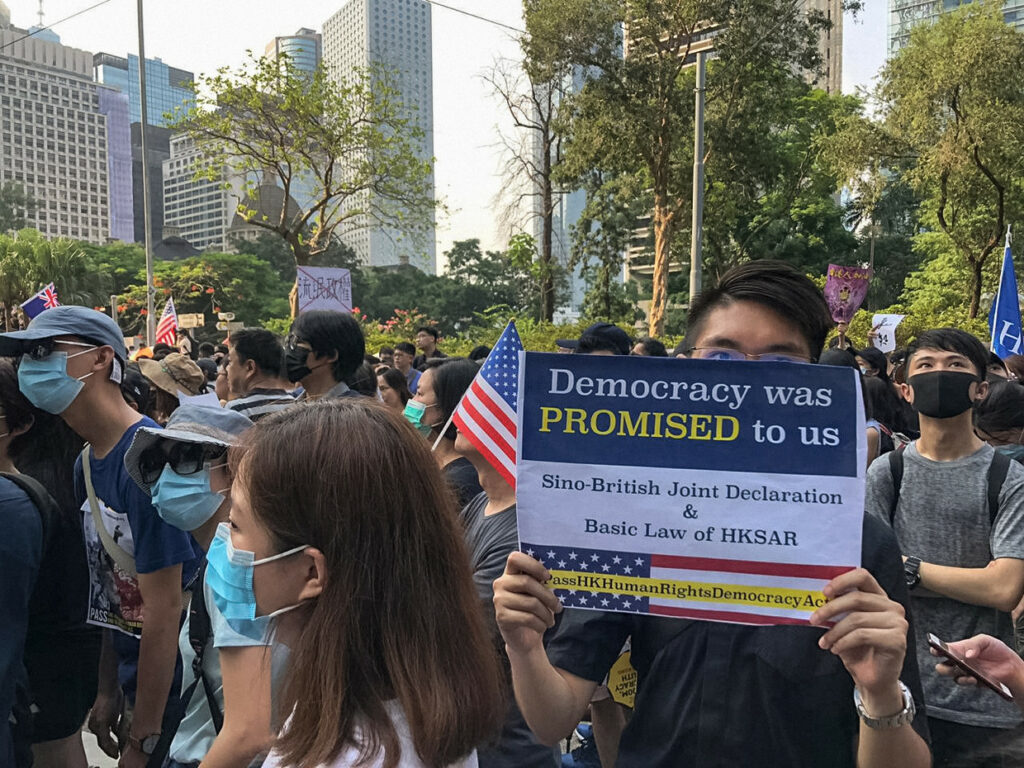 “Liberate from whom?” I asked a cluster of protesters, all of them in ninja outfits, metal bars in their hands, black scarves covering their faces.

Several of them replied, mumbling something incomprehensible. One girl shouted defiantly:

“But Hong Kong is China, isn’t it?” I asked. “How could it be liberated from itself?”

“No! Hong Kong is Hong Kong!” came a ready-made reply.

The big demonstration was clearly treasonous. Its members delivered a petition to the US consulate general, demanding that the US Congress pass legislation that would require its government to monitor and decide whether Hong Kong is ‘autonomous enough’ from the PRC, and whether it should then qualify for US trade and economic benefits.

All over the downtown area, hundreds of ‘ninjas’ were shouting pro-Western slogans. Here British-era HK flags were being waved, alongside the US flags. 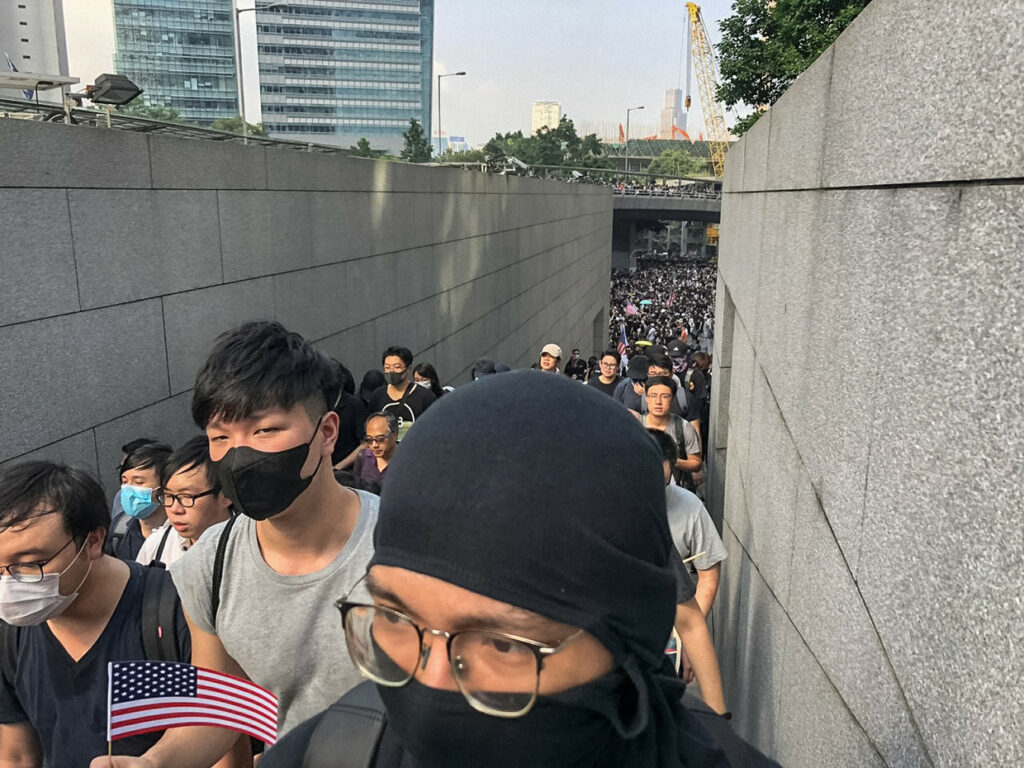 I approached a young couple among the protesters, who were resting on a bench:

“Do your friends realize how brutal, undemocratic and oppressive was British rule? Do they know in what misery many Hong Kong citizens had to live in that era? And about censorship, humiliation…?”

“No!” They shouted at me, outraged. “It is all propaganda!”

“Whose propaganda?” I wondered.

“The propaganda of Beijing!”

At least they spoke some English. A bizarre thing about Hong Kong is that, while some people here would like to (or are perhaps paid to say that they’d want to?) have the British colonial administration back, a great majority of the people hardly speak any English now, while also refusing to speak Mandarin. Little wonder that Hong Kong is quickly losing its edge to the pro-Chinese and highly cosmopolitan Singapore!

But the demonstration was not where ‘the action’ really was and I knew it, intuitively.

The flag-waving march was a big staged event for the Western mass media. There, ‘pro-democracy’ slogans were chanted in an orderly manner. Nothing was burned, vandalized or dismantled wherever Western press cameras were present!

A few blocks away, however, I witnessed monstrous vandalizing, of one of the entrances to the Central subway (MTR) station. Hooligans who call themselves ‘protesters’ were ruining public property, a transportation system used by millions of citizens every day.

While they were at it, they also dismantled public metal railings that separate sidewalks from roadways. Metal bars from this railing were later utilized for further attacks against the city infrastructure, as well as against the police. 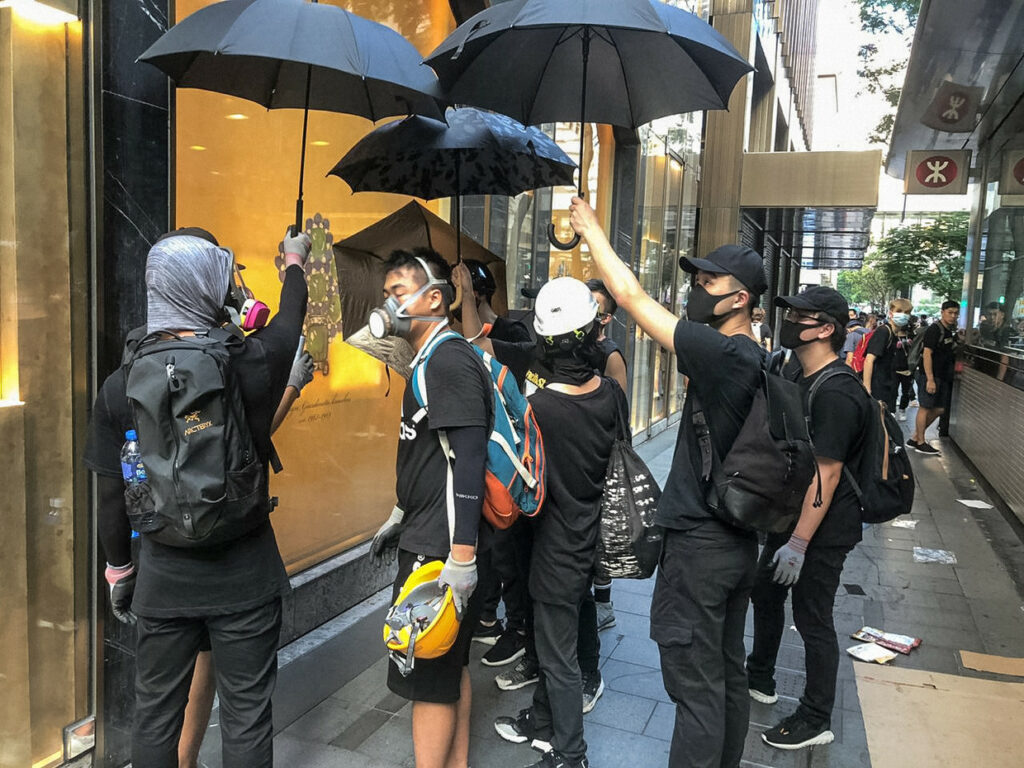 Before burning the store

Umbrellas in the hands of ‘protesters’ were covering the crime scene. Umbrellas similar to those used in 2014, during the previous, so-called ‘Umbrella Uprising.’

No foreign reporters were in sight! This was not for the world. This was raw, real, and brutal.

I kept filming and photographing. I was not wearing any press jacket or helmet or Press insignia. I never do, anywhere in the world.

They left me alone; too busy destroying the street. As they were dismantling public property, their backpacks, stuffed with portable players, were regurgitating the US national anthem. 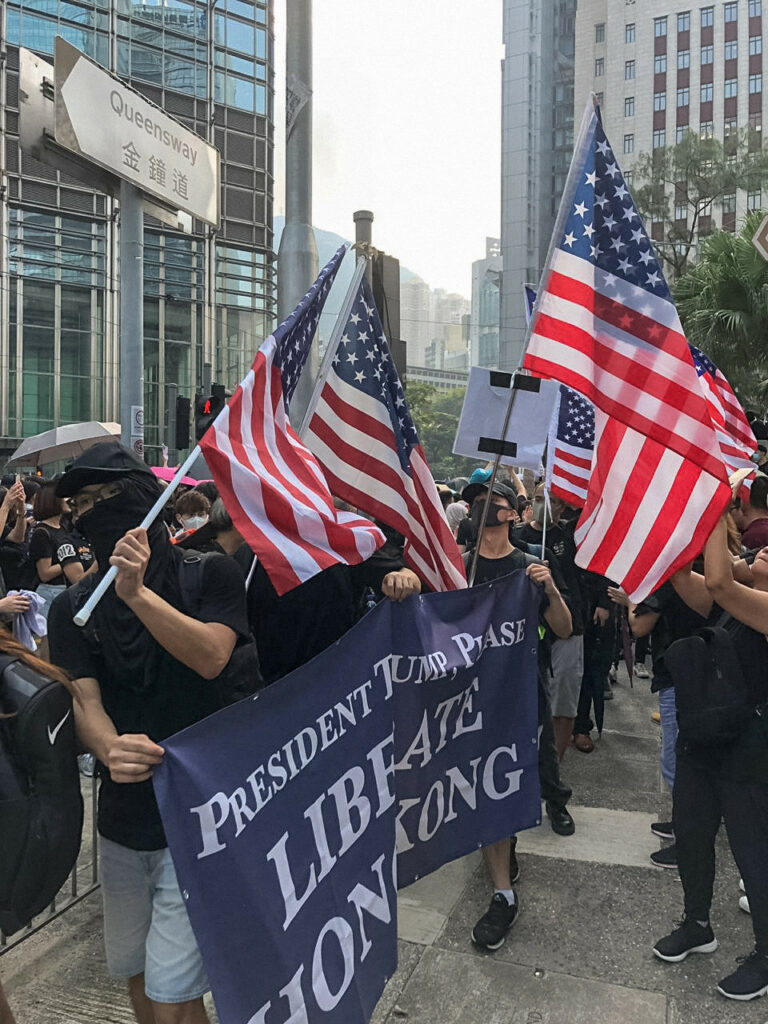 My friend from Beijing wrote me a brief message:

“They are selling their own nation and people. We have very bad words for them in Chinese.”

But it is not only mainland China that is disgusted with what is happening in Hong Kong. Three major Hong Kong-based newspapers, Wen Wei Po, Ta Kung Pao and Hong Kong Commercial Daily, are all pro-Beijing, pro-police and are defining ‘protesters’ as “rioters” or “troublemakers” (in Chinese).

Among the big ones, only Ming Pao and Apple Daily, which are traditionally anti-Beijing, are defining ‘protesters’ as ‘gatherers’, ‘protesters’ and even “liberators.”

Local citizens are mainly (as they’d been during the 2014 riots) hostile to the ‘protests’ but are scared to confront the mainly young, covered and armed (with metal bars and clubs) gangs. Some tried to, even in a luxury mall in the center of the city, and were brutally beaten.

‘Protesters’ seem to be on adrenalin, and in a highly militant mood. They gather and move in hordes. Most of them refuse to speak.

What is important to understand is that, while the rioters are trying to spread the message that they are ‘fighting for democracy,’ they are actually highly intolerant to all those who disagree with their goals. In fact, they are violently attacking those with different opinions. 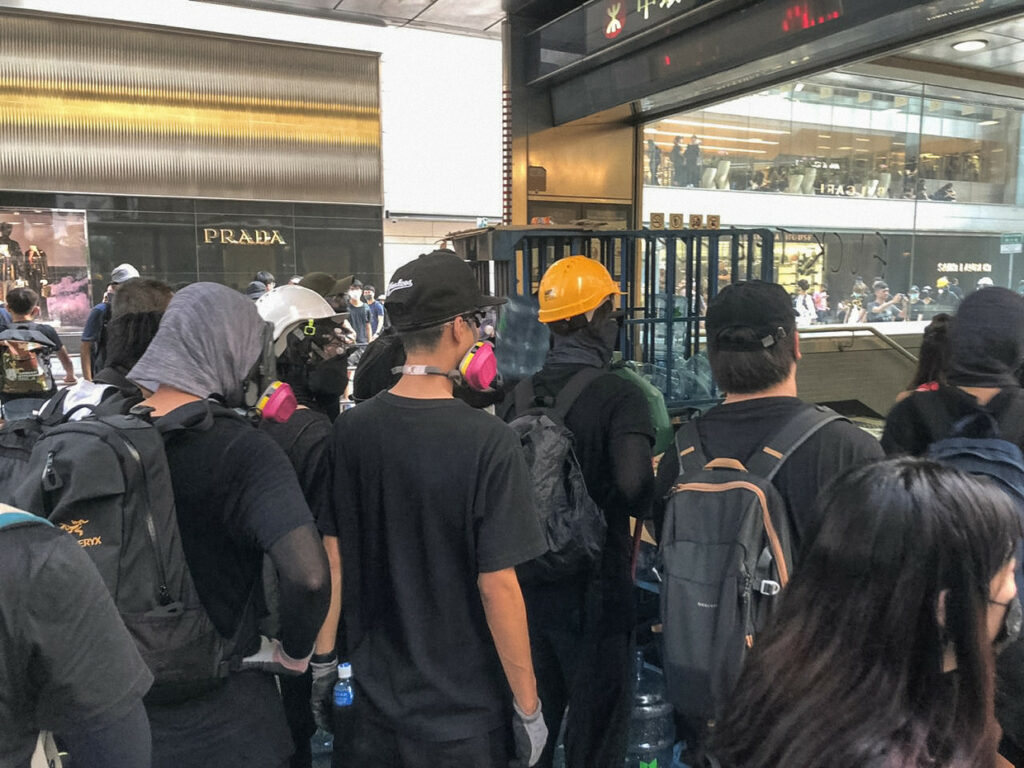 Furthermore, and this I have to spell out, after covering protests in literally hundreds of cities worldwide, from Beirut to Lima, Buenos Aires, Istanbul, Paris, Cairo, Bangkok and Jakarta: what is happening in Hong Kong is extremely mild when it comes to police responses! Hong Kong police run well and fast. It created human chains, flashed a lot of light and sporadically used tear gas. It defends itself when attacked. But violence?

If you compare police actions here to those in Paris, it is all politeness and softness. Hardly any rubber bullets. Tear gas is ‘honest’ and not mixed with deadly chemicals, like it is in many other places, and administered in small doses. No water cannon spitting liquid full of urine and excrement, as in many other cities of the world. Trust me: I am an expert in tear gas. In Istanbul, during the Gezi Park uprising, protesters had to use gas masks, so did I. Otherwise you’d faint or end up in a hospital. People are also fainting in Paris. No one is fainting here; this is mild stuff. 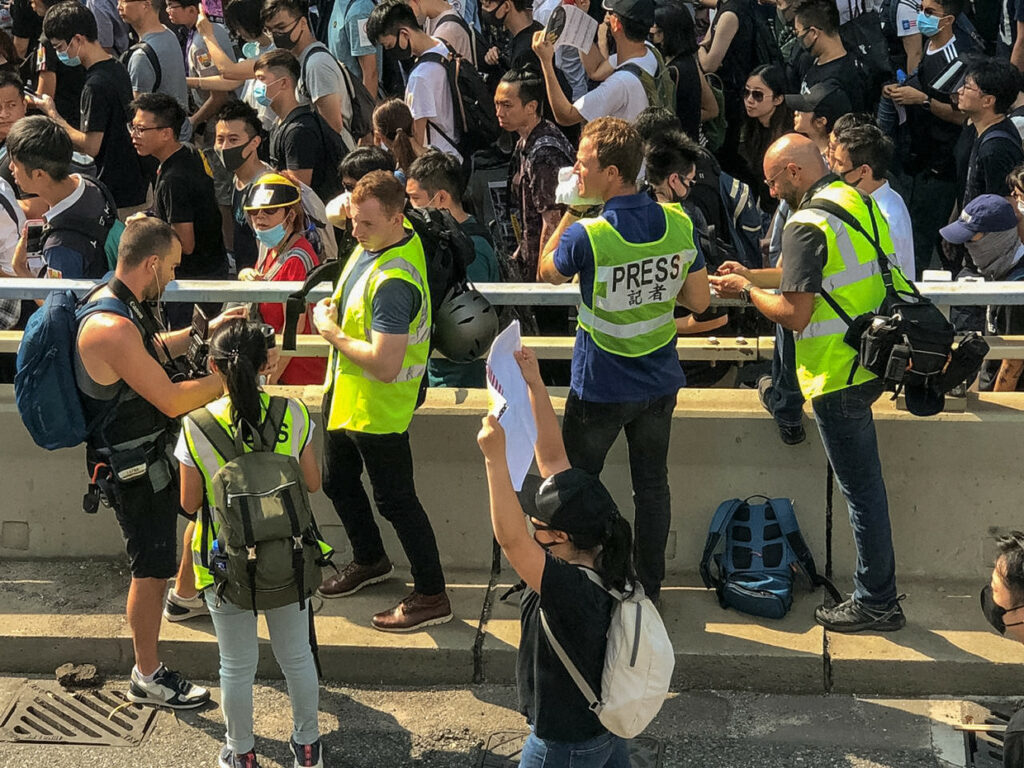 As for the ‘other side,’ the level of violence from the protesters is extreme. They are paralyzing the city, ruining millions of lives. The number of foreign arrivals in Hong Kong is down 40 percent. Reception at the Mandarin Oriental Hotel, which is right next to Sunday’s battles, told me that most of the rooms are now empty, and during the ‘events’, the hotel is cut off from the world.

And what about their traitorous demands? Would this be accepted anywhere in the world? Flying flags of a foreign country (in this case, of the USA) and demanding intervention?

Hong Kong “pro-democracy activist leaders” like Joshua Wong are clearly colluding with Western interests and governments. He and others are spreading, constantly, what anywhere else would be described as fake news. For instance, “My town is the new Cold War’s Berlin,” he recently declared. Yes, perhaps, but not because of the HK government, but because of his own actions and the actions of people like himself.

Coverage of events by Western mass media is clearly selective and that is putting it mildly. Actually, many media outlets from Europe and North America are ‘adding fuel to the fire.’ They are encouraging rioters while exaggerating the actions of local police. I am monitoring and filming their work and what I see is outrageous!

I am writing this report in Tai Kwun Center. Now world-famous art complex (of  the “new, Chinese Hong Kong”), this used to be the Central Police Station under the British occupation, as well as so-called Victoria Prison Compound.

Mr. Edmond, who works for the center, explains:

“If there was a referendum now, the so-called protesters would not win. They would lose. This is an internal issue of China, and it should be treated as such. A continuation of the 2014 events. What changed this time is that the protesters are opting for extreme violence now. People of Hong Kong are scared; scared of them, not of the authorities.” 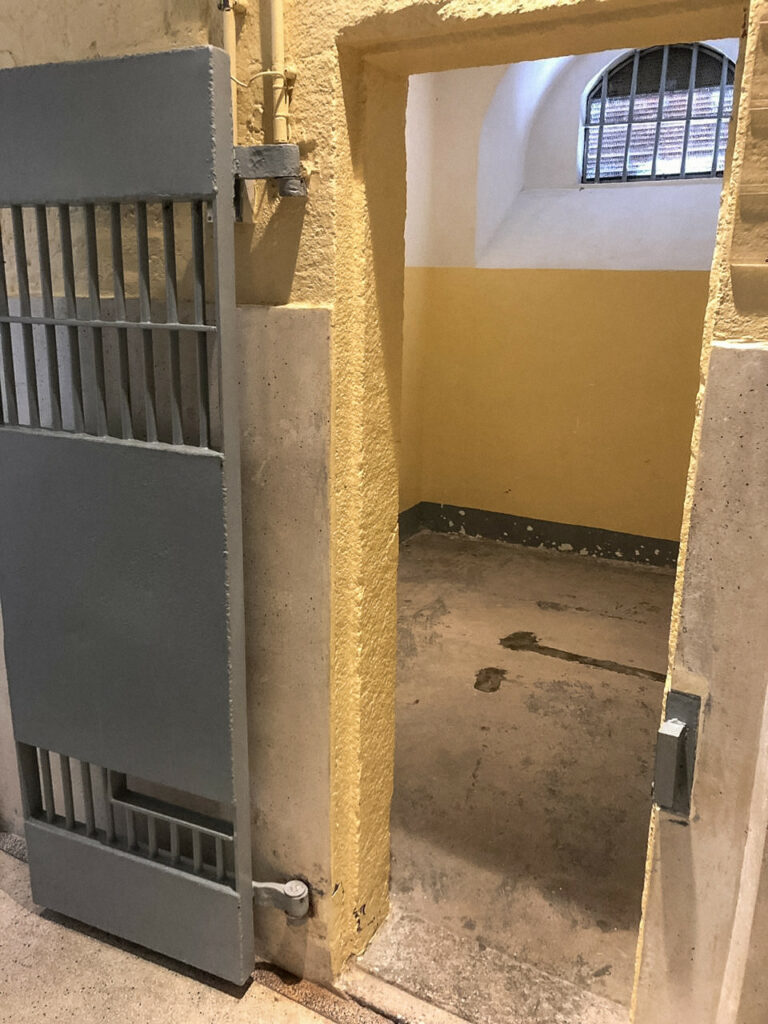 Here, prisoners were confined and executed, during British rule. Not far away from here, monstrous slums were housing deprived subjects of the queen. After the Brits left, those slums were converted to public parks.

Life in Hong Kong improved. Not as fast as in neighboring Shenzhen or Guangzhou, but it improved. The reason Hong Kong is being ‘left behind’ is because of its antiquated British-era laws, rules and regulations, its extreme capitalist system; because of “too little of Beijing”, not “because of too much of it.”

These hooligans are going against the interests of their own people, and their own people are now cursing them. Not loudly, yet, as rioters have clubs and metal bars, but cursing.

Western media chooses not to hear these curses. But China knows. It hears. I hear Hong Kong people, too.

More: Hong Kong and the Audacity of the U.S. Part of a “Destabilization War” with China

All images in this article are from the author