22 Oct 2019 – The WikiLeaks legal team has a strong case to throw out Assange’s extradition request after the government that wants him extradited got hold of surveillance video of his privileged attorney-client conversations.

If this were a normal legal case, WikiLeaks’ lawyers would almost certainly be able to get the extradition request by the United States for their client Julian Assange thrown out on the grounds that his privileged conversations with his lawyers at Ecuador’s London embassy were secretly videotaped. 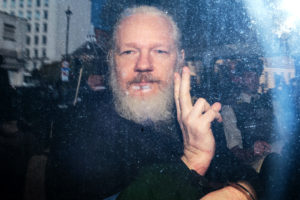 Julian Assange gestures to the media from a police vehicle on his arrival at Westminster Magistrates court on April 11, 2019 in London. After weeks of speculation WikiLeaks founder Julian Assange was arrested by the Scotland Yard inside the Ecuadorian Embassy.
Jack Taylor/Getty Images

The very nation that wants him extradited to stand trial in Virginia has obtained access to those videos. In a normal extradition case it would be hard to imagine Britain sending a suspect to a country whose government has already eavesdropped on that suspect’s defense preparations.

But this is not a normal legal case.

“The Case should be thrown out immediately. Not only is it illegal on the face of the treaty, the U.S. has conducted illegal operations against Assange and his lawyers which are the subject of a major investigation in Spain,”

WikiLeaks Editor-In-Chief Kristinn Hrafnsson said on Monday as the imprisoned Assange appeared before a judge in magistrate’s court in London.

“I don’t understand how this is equitable,” Assange told the court.

“This superpower had 10 years to prepare for this case and I can’t access my writings. It’s very difficult where I am to do anything but these people have unlimited resources…They are saying journalists and whistleblowers are enemies of the people. They have unfair advantages dealing with documents. They [know] the interior of my life with my psychologist”

as the CIA presumably obtained videos of those conversations as well.  Assange was then packed off in a van back to his dreary cell at Belmarsh prison.

This is a travesty of justice on many levels.

The existence of Section E of the 1917 Espionage Act, which technically incriminates the unauthorized possession and dissemination of U.S. classified material by anyone, anywhere in the world, effectively criminalizes investigative journalism and is a travesty that must be challenged on First Amendment grounds.

And now a defendant’s rights to a fair trial here in Virginia have been seriously undermined, indeed practically nullified, after his conversations with his attorneys came into the possession of the government that wants to prosecute him.

But this is not about justice. This is about revenge.

No case better illustrates just how corruptly powerful the U.S. and British intelligence services and militaries have become, as well as the justice system of both nations, which defend those corrupt interests.

No case better illustrates how those powerful interests are protected by the legal system in punishing the man who did most to expose their crimes to a public, a public rendered apathetic by an Establishment media that has distracted them and presented Assange as an enemy of the people.

No case better illustrates how the U.S. and Britain, together carrying out illegal mass surveillance and unending war, are clinging to a mere pretense of democracy.

That pretense is being imperiled by the adjudication of this case.

If both governments care in the very least about maintaining an appearance of following the rule of law, it has this opportunity: Let Julian Assange go!