Toroidal Interweaving from I Ching to Supercomputers and Back?

14 Oct 2019 – There is no lack of references in the history of mathematics and computing to the role of the encoding of the I Ching (Yi Jing) in providing inspiration to Gottfied Leibniz in 1701 with regard to the development of binary logic, as variously noted (Mary von Aue, Gottfried Wilhelm Leibniz: how the ‘I Ching’ inspired his binary system, Inverse, 1 July 2018; Will Buckingham, Forget Prophecy: the I Ching is an uncertainty machine, Aeon, 11 October 2013). The latter argues that using the I Ching is a weirdly useful way to open one’s mind to life’s unexpected twists.

It is now extraordinary to recognize that the current development of supercomputers is notably based upon a mode of organization — torus interconnect — which is itself evident to a degree in the diagrammatic patterning of the I Ching. Such development necessitates a level of coherence now framed as six-dimensional (Tomohiro Inoue, The 6D Mesh/Torus Interconnect of K Computer, Fujitsu, 2016; Yuichiro Ajima, The Tofu Interconnect D for Supercomputer Fugaku, Fujitsu, June 2019; K supercomputer). “Tofu” stands for “torus fusion”.

Any understanding of supercomputing or the I Ching is necessarily a challenge — defined as they are as separate domains of expertise, typically characterized by mutual deprecation. Such conceptual frameworks merit a degree of comparison with the results of recent neuroscience research which indicate the remarkable possibility of cognitive processes of up to 11-dimensional form in the light of emergent neuronal connectivity in the human brain.

Also curious is the parallel dependence on geometrical frameworks in the development of the formal logic of opposition, notably extending into those of higher dimensionality which are not readily visualized — such as the hypercube (Oppositional Logic as Comprehensible Key to Sustainable Democracy: configuring patterns of anti-otherness, 2018; Alessio Moretti, The Geometry of Logical Opposition, 2009). Seemingly quite unrelated is the preoccupation of cybernetics with feedback loops, fruitfully explored as interrelating thousands of problems and strategies of global concern (Feedback Loop Analysis in the Encyclopedia Project, 2000).

A degree of comprehension of the potential “cognitive confluence” between these disparate preoccupation can be recognized in the widespread familiarity with the Rubik Cube — and, to a far lesser degree, with its more complex forms (Interplay of Sustainable Development Goals through Rubik Cube Variations: engaging otherwise with what people find meaningful, 2017).

This argument follows from previous exploration of a range of animations in which a toroidal perspective is a common feature (Imagining Toroidal Life as a Sustainable Alternative: from globalization to toroidization or back to flatland, 2019). The question here is how better to comprehend what appears to be a pattern of confluence of cognitive concerns probably only detectable through complementary perspectives, as argued by Magoroh Maruyama (Polyocular Vision or Subunderstanding? Organization Studies, 25, 2004).

The challenge is to avoid excessive emphasis on textual articulations characteristic of these patterns by focusing on visual representations which are more suggestive of potential correspondences, as justified separately (Theories of Correspondences — and potential equivalences between them in correlative thinking, 2007; Imagining Order as Hypercomputing: operating an information engine through meta-analogy, 2014). In so doing, the intention is to avoid premature (and presumptuous) closure in order to evoke imaginative reflection towards greater coherence — perhaps usefully to be understood as a form of “hypercomputation“, as speculatively envisaged by Alan Turing with respect to an oracular function. With the emphasis on imagination, the quest is for indications that might trigger it (In Quest of Mnemonic Catalysts — for comprehension of complex psychosocial dynamics, 2007).

The argument traces a pattern connecting disparate cubic frameworks variously evident or implied. This includes the suggestion that global civilization is currently trapped within such a cubic metaphor — if not incarcerated therein — recalling the insight of Geoffrey Vickers: A trap is a function of the nature of the trapped (Freedom in a rocking boat: changing values in an unstable society, 1972). With the future degrees of urbanization now envisaged, a cubic context will become preferred to ever higher degrees in contrast with the subtle complexities of nature.

Torus Interconnect — As Used in Supercomputers 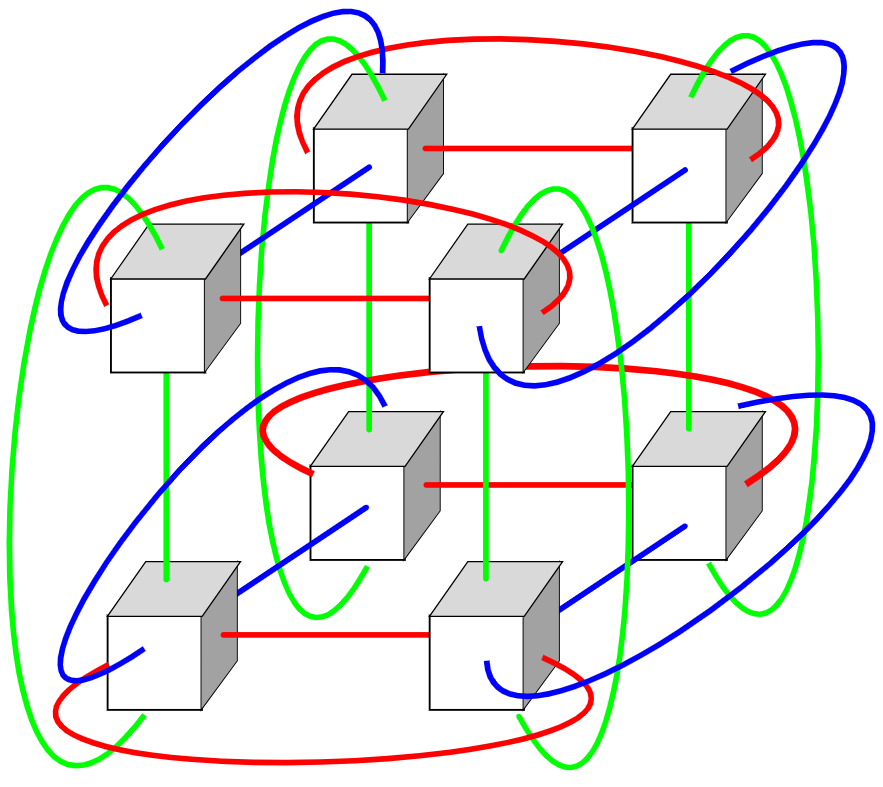